New Housing Crisis in the Making? If So, What’s the Solution? 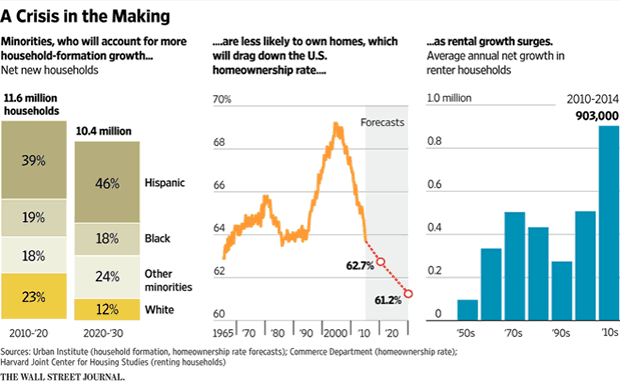 Home ownership rates are sinking and demographics are part of the reason. But does that constitute a new housing crisis? The Wall Street Journal writer Nick Timiraos makes the case in New Housing Crisis Looms as Fewer Renters Can Afford to Own.

Last decade’s housing crisis has given way to a new one in which many families lack the incomes or savings needed to buy homes, creating a surge of renters and a shortage of affordable housing.

The latest crisis looks very different from the subprime mania of the early 2000s, but it does share one

trait: Policy makers in Washington appear either unaware or unwilling to do much about it.

The U.S. homeownership rate is now below where it stood 20 years ago when President Bill Clinton launched a national campaign to encourage more Americans to buy homes. Conventional wisdom says the rate, now at 63.7%, is leveling off to where it was for decades before the housing-market peak.

But this is probably wrong, according to research from the Urban Institute, which predicts homeownership will continue to slip for at least the next 15 years.

Demographics tell the story. The Urban Institute researchers predict that more than 3 in 4 new households this decade, and 7 of 8 in the next, will be formed by minorities. These new households — nearly half of which will be Hispanic — have lower incomes, less wealth and lower homeownership rates than the U.S. average.

The declines reflect a surge of new renter households, which is boosting rents. Together with tougher mortgage-qualification rules, this will leave households stuck between homes they can’t qualify to purchase and rentals they can’t afford, says Ron Terwilliger, who spent two decades running Trammell Crow Residential, one of the nation’s largest apartment developers.

As rental households devote a greater share of their income to rent, families could face greater challenges in saving for a down payment. This could restrain a housing market that has failed to provide any real lift to the economy in the current expansion.

What’s to be done? Given budget pressures, it may not be realistic to expect the government to spend any more money on housing than it already does. Thus, the focus now should be on reallocating what is already committed, says Mr. Terwilliger, a Republican, who this month will formally launch a foundation designed to start these conversations. His goal is legislation after the 2016 election that realigns housing policy with the shifting dynamics.

Given that Terwilliger spent two decades as one of the nation’s largest apartment developers the answer should be easy to figure out. He wants to end tax breaks for home ownership to subsidize new home owners and “free up funds for the rental side.”

His complaint: 75% of the housing tax breaks go to the top 20% of individuals. That is hardly shocking given the top 20% buy the most expensive homes and therefore pay the most in interest.

Timiraos, buys all Terwilliger’s nonsense hook line and sinker, finishing the WSJ article with “Politically, none of this will be easy . Some will say it’s a zero-sum game — helping renters at the expense of owners. Not so, says Mr. Terwilliger. If renters can’t ever become homeowners, who will buy those homes when today’s homeowners need to sell?”

Housing Crisis Past and Present

The 2015 housing crisis was caused the same way as the one in 2007: Interference by the Fed, by Congress, by local officials wanting to create affordable housing.

Driving up home ownership rates does is guaranteed to do one thing: drive up prices.

The government has no business promoting one form of living over another.

Terwilliger ends with the question “If renters can’t ever become homeowners, who will buy those homes when today’s homeowners need to sell?”

The answer should be obvious: Prices will fall until there is a pool of buyers!

In the wake of the great financial crisis, home prices actually fell to the point of being affordable. Few seemed happy with the result. The Fed wanted to prevent deflation and in the greatest financial experiment in history unleashed round after round of QE.

Asset prices recovered, but wages didn’t. As a result, homes are once again unaffordable.

Does Terwilliger want affordable housing or not?

If government and the Fed got out of the way, there would be no problem. Instead, Terwilliger wants the government to “do something”.

I suggest the government and the Fed have done far too much already.

Instead of promoting something, a process that has failed every time, how about undoing everything that contributed to the mess.

That’s the real solution to the problem, not more self-serving affordable housing nonsense from people with a vested interest in promoting something for their own benefit.