Negative Interest Rates Set to Propel the Dow Jones to the Stratosphere? 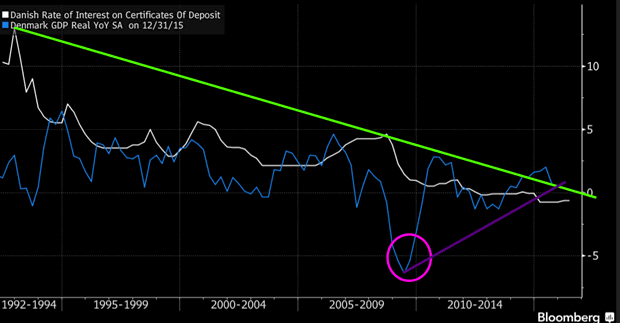 “Every man must patiently bide his time. He must wait — not in listless idleness but in constant, steady, cheerful endeavors, always willing and fulfilling and accomplishing his task, that when the occasion comes he may be equal to the occasion.” ~ Henry Wadsworth Longfellow

Central bankers wanted to put the fear of God into the masses and to a large degree they have succeeded in doing so; the masses are so afraid that they continue to hoard their money and refuse to put into the market, and that is why this Bull-Market is the most hated in history. Nine years and counting and you would think by now they would have surrendered these false beliefs as the Bears have been decapitated, and the naysayers are hiding in the woodwork. However, ignorance, like stupidity knows no limits and continues to trend upwards; if there were a way to invest in stupidity it would be an easy way to score a home run. The main driving force behind this market is hot money, and hot money will continue to drive this market higher and higher. Yes, it will end one day but by that time if you are a bear you would be bankrupt several times over or be ready to shoot yourself a dozen times for sitting on the sidelines. The Fed has ensured that hot money continues to flow into this market by keeping rates artificially low for an extended period. Their next move is to be to jump on the negative rate bandwagon; they will be forced to do so sooner or later. Resistance is futile in this instance. The Fed has once again changed its stance; last year it was somewhat hawkish, but this year Fed head Yellen had turned dovish.

Central bankers knew that people would save more and more out of fear initially due to economic uncertainty even though rates were and still are low. They know that many will continue to remain wary when negative rates hit the US and even when banks start charging them a fee to hold onto their money. People are saving more and more because they don’t know what the future holds. Experts will state that central bankers miscalculated, but the truth is that they did not miscalculate, they were planning for this. Eventually, when the pain becomes too intense, the masses will realize that they have no option but to speculate and suddenly they will all act in unison. They will jump out of the box and start to look desperately for investments that offer better rates of return; there is no better casino in town than the stock market. It offers the allure of infinite wealth but rarely delivers such gains to the masses. The idea here is to back the crowd into a corner like you would a rat in a small cage, finally, when it has nowhere to turn, it will lash out and strike, realizing that its life is at stake. Whether it wins or not is irrelevant, the objective was to goad it into lashing out like a tiger. If the central bankers are successful, they will have created one of the biggest stimulus programs in history, and the masses will be the ones funding it. Denmark’s GDP started to rise as indicated in the above chart after rates turned negative, and that is and was the whole purpose of the program. Note that shortly after the crisis of 2008-2009; rates were pushed lower faster than at any period before in the last 20 years; the lower they dropped, the higher the GDP; in fact, one can conclude that it’s in an uptrend.

Yes, we are aware that this recovery is fake and illusory; hot money supports the whole economy, but this is taking place on a worldwide basis, and it’s not going to stop. Some countries have just embraced it while others are on their way to embracing it; this is a race to the bottom, and it won’t stop or end until everyone is on board. In Denmark, they have been embracing negative rates for over four years while in the U.S the Fed is preparing the masses for a day when negative rates will become reality. We suspect that the America will embrace negative rates for a much longer period.

“Negative rates are counter-productive,” said Kasper Ullegaard, head of fixed-income overseeing more than $15 billion at Sampension in Copenhagen. The policy “makes people save more to protect future purchasing power and even opt for less risky assets because there’s so little transparency on future returns and risks.”

Yes, they are counterproductive over the long run, but in the short to medium time frames, they can produce a helluva of bang and that’s the main objective of the big players. They will cash out well before the next financial crisis hits.

Clearly they are and will continue to do so; the idea is to create the mother or grandfather of all bubbles. When the masses decide to speculate there will be so much money flowing into the markets that all assets including Gold will fly; some will soar to the moon, some to the sun and some possibly to the next galaxy.

We have continuously stated that this Bull Market is destined to run a lot higher than most envision and will only end when the masses join the party. We have pounded this theme repeatedly over the past few years and much to the dismay of the naysayers the markets have soared in the stated direction. The following extract was sent out to our paying subscribers:

And as expected the bull continued to trend higher. In fact, the SPX put in a new six months high and is dangerously close to testing its old highs; so what do the naysayers have to say now; nada. But, don’t you worry, they will start yelling again in the near future, stating that all hell is ready to break loose, the moment the markets start to correct. ~ Market Update April 19, 2016

The markets have continued to trend higher since the last update, and overall we expected this as the trend is still up and none of our sentiment indicators had moved to the extreme zones.

Fundamentals clearly are not supportive of this market; if relied fundamentals one would be shorting this market a long time ago and by now you would either be bankrupt or on your way to the loony bin. Hot money drives this market, and the situation will turn explosive when the Fed embraces negative rates. The Fed has no option but to embrace negative rates; we are in the midst of a massive currency war, and the only option left on the table is to “devalue or die”.

The plan, therefore, is simple; every strong pullback has to be viewed as buying opportunity. This bull market will only end when the masses join the party, and they are a long way from embracing one of the most hated bull markets in history.

“The paranoiac is the exact image of the ruler. The only difference is their position in the world. One might even think the paranoiac the more impressive of the two because he is sufficient unto himself and cannot be shaken by failure.” ~ Elias Canetti