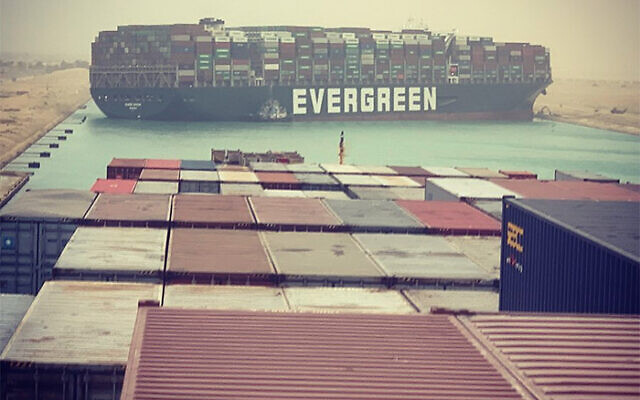 This morning – Global Supply Chains could be stressed by the boat jammed in the Suez Canal. The lessons from the Pandemic offer an opportunity to rethink Global Infrastructure Spending – and mop up much of the money glut currently funding financial asset inflation!

It’s the No-See-Ums that create the biggest speedbumps for markets. Earlier this week I was talking about supply-chain finance breaking down. This morning it’s a rogue gust of wind that’s set actual real global supply chains a’tingle.

When a whale gets stranded on a beach what kills it is its own weight crushing its internal organs and the lungs. When a massive container ship jams itself across the Suez Canal, after a freak wind grounded it on a sandbar, it’s not as simple as just dragging it off – were that even possible. It’s the weight of the ship bearing down on its keel and internal structure that’s the killer. What would be worse than a ship blocking the canal would be a broken ship and containers and fuel spilling out of it. It took years to remove the wrecks of the Arab-Israeli wars from the Canal.

With luck and a good wind raising the water level, they may clear the Ever Given, but don’t make assumptions. Hope – as I keep reminding readers – is seldom an effective strategy. The authorities will be hoping, but it may take some time to lighten the ship, refloat it, drag it back down the waterway to unload and inspect it. It blocked the Canal at its very narrowest bottleneck point.