Nasdaq and NYSE Index Pointing to Higher Market Prices for 2016 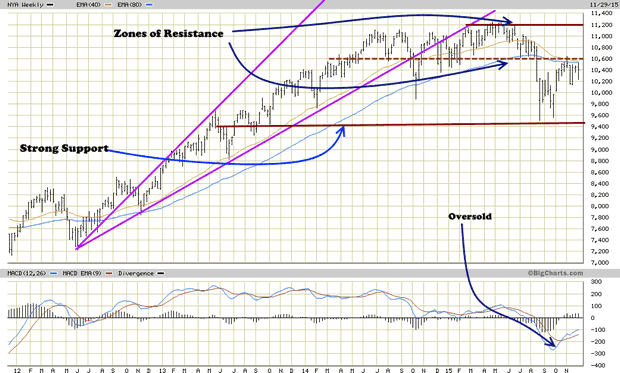 “Don’t ever take a fence down until you know why it was put up.” ~ Robert Frost

We have seen the same song sung over and over again by the Doctors of Doom; the markets are going to crash, the world is going to come to an end, or some other pretentious title. Let’s cut to the chase, the markets are not going to crash; they could experience a strong correction at some future date but that would just present you with another opportunity to buy quality stocks. Could the markets crash? That is a possibility, but you could kick the bucket before the event plays out the way the naysayers have envisioned. In fact, one could go as far as to state that there has never been a real market crash in the true sense of the word and that every so-called crash event was nothing but a buying opportunity in disguise. Crash or correction is a matter of perspective and that perspective depends on where you boarded the train; if you got in towards the end of the ride, then it will certainly feel like a crash. We will examine this concept in more detail in a follow-up article.

Less than two months ago a lot of fuss was made about the death cross formation on the Dow; we immediately repudiated that nonsense and stated the Dow would continue to trend upwards. Fast Forward and the Dow followed the projected course. Now some professors are stating that all is not well with the NYSE and that it is signalling a massive breakdown in the markets. With the advent of Quantitative easing and an ultra low rate environment that has been artificially maintained for an inordinate amount of time, many technical indicators ceased to function normally. As the environment had changed and the Fed had eliminated all semblance of free market forces, the laws of the jungle came into play; adapt or die. It is hot money that is powering this market and it is hot money that will continue to power this market, much to the anguish of the naysayers. The bull market will end one day but that day is not yet upon us. We do not believe that the NYSE Index is signalling impending disaster; at most it is signalling that another correction could be in the works, with extremely strong emphasis on the word “could“.

Let’s take a look at long term chart and see what it’s implying. There is a strong layer of support that comes into play in the 9450-9500 ranges. It would take a monthly close below this level to indicate lower prices. Even in the off chance this did occur, the astute investor will view it for what it is and view it as opportunity knocking in disguise. However, don’t place all your eggs in one basket and hope for this target to be hit. For now, it is a low probability target, unless Turkey and Russia suddenly decide to go to war.

The inability of the NYSE to trade above 10,700 on weekly basis, suggests further downside testing and a possible retest of the October lows. The NYSE is building momentum to take out the 11,200 ranges and eventually put in a series of new highs. Overall the expectation is for the NYSE to be trading higher next year. The NASDAQ is already trading well of its lows and is dangerously close to taking out its old highs. As this is the most speculative index out of all the major indices, it suggests that this trend is likely to continue, as there is still a large percentage of individuals sitting on the sideline. Our analysis indicates that there are currently more individuals sitting in the neutral camp than in either the bullish or bearish camps. Neutrality equates to fear, you sit out because you don’t know what to expect and markets love to climb a wall of worry. Despite trading dangerously close to its highs, the MACDS are still trading in the oversold ranges, validating that there is more upside to this market.

In what light should you view the dire warnings coming from the Professors of doom? Dump these warnings of doom into the nearest dustbin and move on. Our game plan is to view every pullback as a buying opportunity. What is your game plan?

“I can stand brute force, but brute reason is quite unbearable. There is something unfair about its use. It is hitting below the intellect.” ~ Oscar Wilde