Must see chart: ALL eyes on gold now! 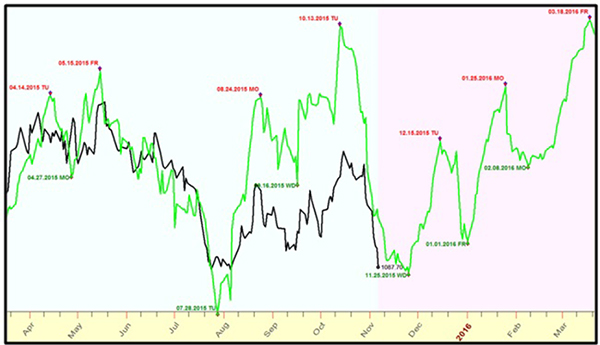 Here’s a forecast chart I’ve been showing to members of my Real Wealth Report and Supercycle Trader this year. It is a must-see chart.

It’s a form of artificial intelligence, called a neural net, a forecasting model I use. This chart is of gold, and includes all known fixed and dynamic cycles that impact gold’s price.

The program finds the probable cycles in gold’s price fluctuations, dynamically updates them with billions of calculations, and then it projects forward a synthesis of those cycles to show the probable path of price.

The green line is the forecast line. The black line, the actual closing price of gold. Uncanny, eh? This is one of the main tools I use for forecasting, not just in gold, but in all markets.

Now, let’s get to the exciting stuff. Remember I told you that this November was shaping up to be an ideal target low for gold? Throughout the year I mentioned it several times in this column. Just a few weeks ago I also told you that gold’s October rally was nothing but a bounce.

And now look at gold: It topped right on cue in mid-October and since then gold has plunged from its October forecast cycle high — shedding $108, a whopping 9.1% in less than a month — and is now plunging into a November low.

In the words of the late and great Jackie Gleason, “How sweet it is!”

So what’s next for gold? Can gold move still lower? Will this be a major bottom in gold?

What about the subsequent rally that is forecast on this chart (green line)? What should you do about it?

Let me answer those questions now …

That does not mean gold will continue to go straight down. Gold has already lost $108 since mid-October and is oversold on a short-term basis. So don’t be surprised if you see a mild bounce or two. But according to the forecast models, gold should — yes — head lower into November 25.

How low can it go? This is the tricky part. Cycles do not tell you much about price. They are about timing and turning points. My other tools come into play to determine price forecasts, and here is the bottom line:

A. Gold has major support at the nearby former low from July at $1,074. That low may hold temporarily, but it should give way heading into November 25. Once it does give way …

Right now, it’s simply too soon to say. But I suspect, based on early indications from my price projection tools, that gold will fall to at least the $1,035 level.

Ideally, I would like to see gold fall below $1,000. That would scare the dickens out of almost every gold investor on the planet, thereby setting up the market for an even more powerful rally to follow.

SECOND, and very importantly, as to whether or not this will be a major bottom in gold, here’s what we need to see …

B. If gold holds the prior $1,074 low — or falls through it but does not test major support at the $1,035 level — then odds are that it will NOT be a major, final low and that instead, gold will then rally, but decline again into April 2016 to yet another new, low.

If that is the case, then the new low that occurs in April 2016 will likely be around the $1,000 level, and it would then be the final low.

Either way, gold is nearing a final, major low. Hopefully, it will come sooner rather than later, in April of next year.

THIRD, as to the rally forecast on this chart, yes, it’s likely going to be a doozie! Moreover, that rally is likely to occur whether or not gold breaks its prior low at $1,074.