Much Higher Dow Simple to Understand … 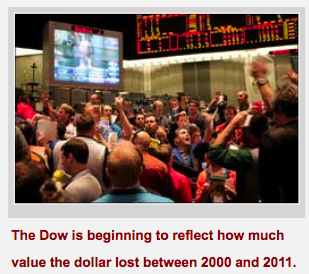 Ever since the March 2009 crash low in the U.S. equity markets, I’ve maintained my view that the Dow Industrials and other broad market indices were entering a new bull market. That forecast has been spot on.

One of the tools I used to come to that conclusion in 2009 was the ratio of the Dow Industrials to the price of gold.

I wrote extensively about it in several issues of my Real Wealth Report. I also reported on it several times in other pieces I wrote. Today I want to update the analysis for you.

First, a refresher. At the peak of the Dow/gold ratio in 1999, the Dow Industrials would have purchased just over 50 ounces of gold. That’s because the Dow was at a high in real, inflation-adjusted terms, while gold was at its bottom at the $255 to $275 level.

During the financial crisis of 2007-09, as equities plunged and gold rallied (since its bottom in 1999), the ratio collapsed all the way down to the 6 to 7 level.

In other words, in terms of gold — what I like to call “honest money” — at its March 9 low the Dow Industrials had lost more than 87 percent of the entire equity bull market from 1980 to 1999.

Since then, stocks have vastly outperformed gold, as stocks have moved higher, and gold lower.

As a result, the ratio of the Dow Industrials to gold has widened back out, to about a level of 15 today.

Put another way, had you bought the Dow Industrials in 2009 at the bottom and sold gold, you would have made 300 percent on your money as the Dow soared and gold plunged (after 2011).

So what does this all mean? And what does it hold for the future for the Dow? I’ll answer those questions now. But I urge you to put your thinking cap on, because the analysis of the Dow/gold ratio is not easy to grasp, yet it’s critically important to understanding the future.

FIRST, the collapse in the Dow-to-gold ratio was not caused simply by a crash in equity prices. It was also due to a crash in the value of the dollar, as reflected in the soaring value of gold from the year 2000 to 2011.

SECOND, the Dow is now beginning to adjust — to reflect how much value the dollar lost between 2000 and 2011.

This adjusting of equities is perfectly normal. All asset classes eventually recalibrate their price levels to the new reality of the purchasing power of the underlying currency, which in this case, is the dollar, which in turn, is nowhere near what it was worth back in the year 2000.

A simple theoretical exercise here will show you how the Dow will adjust.

Naturally, the price of gold is not going to remain at $1,187. It will probably fall back to as low as $900 before it bottoms, one of my targets for the end of gold’s bear market.

Naturally, projections like that assume all else remains equal. In other words, the underlying economy, unemployment, international relations, the global economy and a host of other variables.

So those projections are not realistic.

But what is realistic is this: It would not be unusual at all, in fact, it would be perfectly normal if the Dow/gold ratio were to regain half of what it lost since the year 2000 …

And move back to the 25 level.

Then, all we need to do is pop in various prices for gold to get various measurement of how high the Dow can go. Assuming gold does bottom at $900 and then begins its next bull market, we can then come up with a grid that looks something like this:

Put any number in the first column for gold, and you can come up with any slew of other numbers for the Dow.

And on the flip side, at a Dow/gold ratio of 25 — a perfectly real world and normal retracement of 50 percent of what it lost since 2000 …

It’s certainly not hard to see why the Dow also has huge upside potential going forward, and that its downside is limited to mere technical corrections!

Factor in the war cycles and other geo-political forces that are driving capital to the U.S. stock markets …

And you can easily see why I remain very bullish long term on the U.S. stock markets and why my long-term target of Dow 31,000 may actually end up conservative.

Lastly, an important point: As you can tell from this exercise, the monetary system has changed dramatically.

So much so that it’s also inevitable that at some point in the not-too-distant future, the dollar reserve based system will have to change.

Even as the dollar now rallies, the system is so broken and so out of date with the rest of the world and emerging economies and Asia, we will eventually need a new reserve system with a globally neutral reserve currency.