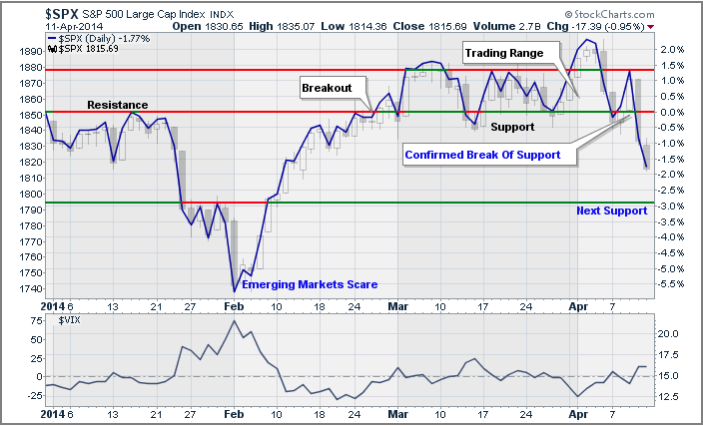 Over the last several weeks, I have been reiterating the risks that remain in the market. However, I have maintained the allocation model at target levels due to the fact that the markets had done nothing wrong.  That all changed this past week.

As I stated in the March 29th report:

“The good news is that, despite plenty of headwinds from geopolitical events, ongoing tapering of bond purchases by the Federal Reserve which is reducing liquidity and weak economic data, the markets have not declined. The index has consistently held support at 1850 and on a very short term basis is beginning to get oversold.”

The first half of the week was relatively benign and on Wednesday the market surged as the FOMC minutes hit the markets. With no signs of increased “tapering,” and filled with friendly language, the markets surged due to the result of two or three media outlets’ duplicitous spin of the FOMC Minutes. However, on Thursday, Mr. Market peaked behind the curtain and did not like what it saw. As the King Report for Thursday noted:

“The Fed stated that QE tapering will continue and the pace might increase. Please recall that the last big equity rally occurred when the usual suspects proclaimed that the Fed would reduce its QE tapering pace or stop tapering QE altogether.  It was a false declaration.

The traders and investors that succumbed to the B.S. from media shills got caned on Thursday and Friday.  It serves them right for reacting to imprecise headlines, spin and algo (HFT) buying.

On Thursday, numerous economists, pundits and Fed watchers echoed our view that the FOMC Minutes provided little new information and internal dissent in regard to future Fed policy is increasing.”

It is becoming clear that the Federal Reserve has gotten itself caught in a liquidity trap.

Furthermore, the new Fed chairwoman doesn’t seem to have the “vocal magic” of her predecessor to calm the markets through Fed speak.

From the NY Times:

“Beyond the broad agreement to continue tapering the pace of asset purchases and the dropping of the 6.5 percent threshold, committee members disagree on just about everything else.”

For example, there is a rising dissent about the extent of slack in the labor market, a debate that continued at the March meeting.  Only a few Fed officials suggested the labor market is nearing a new equilibrium, implying the Fed should wind down its stimulus campaign more quickly or risk higher inflation.

There was also a good bit of disagreement about the health of financial markets. Some officials see growing risks to financial stability, including a downward trend in risk premiums, while a majority continues to see those risks as modest and secondary.  The problem is that the Fed has never been “ahead of the curve” in spotting excessive risk in the market.

“Market confidence in its ability to read the Fed is in tatters on the floor. The Fed’s ability to understand the market’s reaction to its communications might be in even worse shape…Unfortunately, the early obsession with the Fed’s plans for 2015 obscures investors’ understanding of the current economy.”

The problem is that the markets have, until now, placed their faith primarily in the Federal Reserve’s ongoing liquidity programs to support their financial manipulations without “risk.”  Pushing stock valuations in the stratosphere has been the game as long as the Fed was there to bailout the markets in the event something went wrong.  As noted by Savita Subramanian, BofA-Merrill’s head of US Equity Strategy and Quantitative Strategy in Global Macro Research:

“Biotechnology and Internet stocks have seen their EV/Sales multiples triple and double, respectively, over the past two and a half years and they now make up a combined 8% of total US market cap. The median Biotech stock trades at 24x sales, nearly 10x that of the S&P 500 and the highest level since the Tech Bubble.

Meanwhile, the percentage of Biotech and Pharma stocks trading above 10x EV/Sales has reached about 60%.Strong performance, and high valuations, may be justified in some cases by improving pipelines and visibility, but the market has uniformly rewarded stocks in hot industries. The recent sell-off in high growth industries has been ETF driven, as mutual funds have actually been net buyers over the last several weeks. Given that Biotech and Internet carry 60% and 50% over weights in active managers’ portfolios, respectively; we may see more selling pressure in these pockets of the market.”

With valuations now being questioned combined with the extraction of liquidity this puts the markets at risk of further downside risk in the future.  However, this DOES NOT mean that the markets are about to “crash.” However, a further decline in the future, particularly this summer, is indeed likely at this juncture.

How Big Of A Correction?

As I stated this past Monday:

“With the markets falling by an average of 12% since 1833, and 6% since WWII, the summer months of mid-term election years have not been kind to investors.

However, let’s sum up the risks at play in the markets currently:

The chart below shows the market on a weekly basis going back to 2004. As you will note, in both instances the longer term cyclical bull trend saw prices lift off late in the cycle into an“exuberant” bullish uptrend.  That sharp advance cannot be sustained indefinitely.

I have also noted with the vertical “blue” dashed lines where the overbought/sold indicators have identified market bottoms.  Currently, the indicators are suggesting that there is likely a bit more to go to the downside at the moment which brings 1800 into focus as the next major support level.

Furthermore, one of my “fear” gauges (the CBOE Total Put/Call Ratio) is also indicating that the current sell-off is likely not complete yet.

I have highlighted the previous market “topping” action as we see currently, and the coinciding turn up in the put-call ratio.

As I published on Tuesday of this past week (prior to the correction) in “No One Rings A Bell At The Top:”

“The point here is simple. The combined levels of bullish optimism, lack of concern about a possible market correction (don’t worry the Fed has the markets back), and rising levels of leverage in markets provide the “ingredients” for a more severe market correction. However,  it is important to understand that these ingredients by themselves are inert. It is because they are inert that they are quickly dismissed under the guise that “this time is different.”

Like a thermite reaction, when these relatively inert ingredients are ignited by a catalyst they will burn extremely hot. Unfortunately, there is no way to know exactly what that catalyst will be or when it will occur. The problem for individuals is that they are trapped by the combustion an unable to extract themselves in time.

I recently wrote an article entitled ‘OMG! Not Another Comparison Chart‘ because there have been too many of these types of charts lately. The reason I make that distinction is that the next chart is NOT a comparison for the purposes of stating this market is like a previous one. Rather, it is an analysis of what a market topping pattern looks like.” As you can see, during the initial phases of a topping process complacency as shown by the 3-month volatility index at the bottom remains low. As the markets rise, investor confidence builds leading to a “willful” blindness of the inherent risks. This confidence remains during the topping process which can take months to complete. With individuals focused on the extremely short term market movements (the tree) they miss the fact that the forest is on fire around them. However, as shown, by the time investors realize the markets have broken it is generally too late.

Do Nothing Right Now

While I do believe that the markets are likely to correct further, they are also oversold enough on a short term basis to bounce toward 1850 first.  As investors, our job is not to try and “predict” what the markets will do, but rather react to them.

Since we work on “weekly” data to slow down the volatility and reduce turnover in portfolios, by the time a signal is given the markets are already oversold enough to attract some short-term buying.  We want to use that “dead cat bounce” as an opportunity to implement any portfolio changes necessary.

The chart below shows the short term view of the market and the likely target for a bounce. The vertical blue lines denote when the short term moving average has crossed BELOW the longer term moving average.  In these instances, the selloff was not complete but the markets bounced before going lower.  The horizontal red line shows the most likely level of resistance for the markets currently which is 1850, the previous support level that was tested multiple times since the beginning of the year.  This level will now provide fairly significant resistance.

Therefore, in portfolios, take the following actions on a bounce:

The simple reality is that I have no idea whether we are entering into the next major correction or just a buying opportunity.  There are “too many” people writing and talking about a “bubble” for there to actually be one.

Dare To Be Different

One of my mentors, Howard Marks, recently wrote something that everyone should clearly understand.

“This just in: you can’t take the same actions as everyone else and expect to outperform.

For years, I have posed the following riddle:  Suppose I hire you as a portfolio manager and we agree you will get no compensation next year if your return is in the bottom nine deciles of the investor universe but $10 million if you’re in the top decile.   What is the first thing you have to do – the absolute prerequisite – in order to have a chance at the big money? No one has ever answered it right.

The answer may not be obvious, but it’s imperative: you have to assemble a portfolio that’s different from those held by most other investors.  If your portfolio looks like everyone else’s, you may do well, or you may do poorly, buy you can’t do different. And being different is absolutely essential if you want a chance at being superior. In order to get into the top of the performance distribution, you have to escape from the crowd. There are many ways to try.  They include being active in unusual market niches; buying things others haven’t found, don’t like or consider too risky to touch; avoiding market darlings that the crowd things can’t lose; engaging in contrarian cycle timing; and concentrating heavily in a small number of things you think will deliver exceptional performance.

The bottom line on striving for superior performance has a lot to do with daring to be great. Especially in terms of asset allocation, ‘can’t lose’ usually goes hand-in-hand with ‘can’t win.’”

The problem is that while this sounds easy, it isn’t.  This is why roughly 80% of all investors severely miss their goals over time.  They buy high, sell low and do mostly everything wrong in between by chasing short term gains and the expense of long term pain.

The goal in investing is asymmetry in aligning the portfolio to garner a return (not market related returns) without a commensurate exposure to risk (potential to lose greatly).

That doesn’t mean that all losses are avoidable.  They aren’t and it’s not realistic.  Return expectations have to be aligned with regards to the mitigation of risks.  The more risks that you wish to mitigate the lower the overall portfolio returns will be.  Quite simply, there is no free lunch.  It is just a matter of how much you are willing to pay for the meal you want to eat.

Lance Roberts is the General Partner & CEO of STA Wealth Management, Host of the “Streettalk Live” Daily Radio Show(streamed live at www.streettalklive.com), and Chief Editor of the X-Factor Report and the Daily X-Change Blog.
Follow me on Twitter: @streettalklive