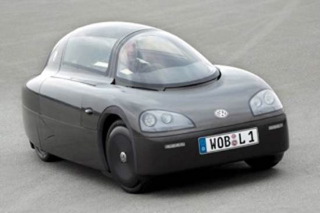 This is not a joke and they do sell for $600.00. They won’t be able to make them fast enough–good just to run around town. Here’s a car that will get you back and forth to work on the cheap…$600 for the car.

Only  a one seater however – Talk about cheap transportation…. Volkswagen’s $600 car gets 258 mpg. It looks like Ford, Chrysler and GM missed the boat again! This $600.00 car is no toy and is ready to be released in China next year. The single seater aero car totes VW (Volkswagen) branding too. Volkswagen did a lot of very highly protected testing of this car in Germany, but it was not announced until now where the car would make its first appearance.

Volkswageb did a lot of very highly protected testing of this car in Germany, but it was not announced until now where the care would make its first appearance. The car was introduced at the VW stockholders meeting as the most economical car in the world. The initial objective of the prototype was to prove that 1 liter of fuel could deliver 100 kilometers of travel. And the Spartan interior doesn’t sacrifice safety. The areo design prived essential to getting the desired result. The body is 3.37 meters long, just 1.25 meters wide and a little over a meter high. The prototype was made completely of carbon fiber and is not painted to save weight.

The power plant is a one cylinder diesel, positioned ahead of the rear axle and combined with an automatic shift controlled by a knob in the interior. Further Safety was not compromised as the impact and roll-over protection is comparable  GT racing cars.The Most Economic Car in the World will be on sale next year: Better than Electric Car at 258 miles/gallon, this is a single-seat car. From conception to production took 3 years and the company is headquartered in Hamburg , Germany .