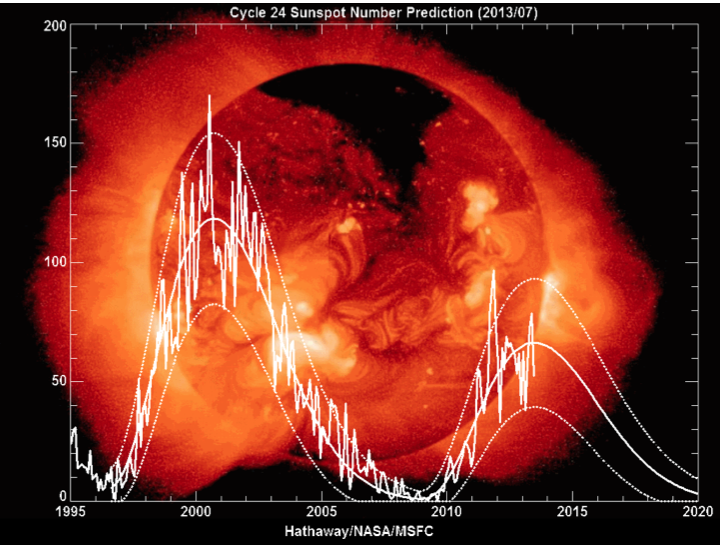 “We don’t have time for a meeting of the Flat Earth Society.”

Well, anyone who is not on Planet Liberal is a “Flat-Earther”.

Anyhow, he was mocking the growing number of folk who are skeptical of the theories about Anthropogenic Global Warming. And his timing was remarkable. Made the declaration when a huge high-pressure area drove temps up on the Western side of North America.

The chart of the Sunspot number remains low as the unusually weak Solar Cycle 24 peaks. This following link provides a review of Livingstone and Penn’s work on diminishing solar activity.

Probably his next grandiose scheme will be to re-unite the Continental Divide.

The following is part of Pivotal Events that was published for our subscribers July 4, 2013.

“A record amount of money poured out of exchange-traded and mutual bond funds in June. Nearly double the amount at the height of the financial crisis in October 2008.”

One can’t help but note that comments on gold are virtually opposite to those on lower- grade bond markets in April. Ironically, both conditions have something to do with ambitious government. The first has been critical in helping fund the experiment in unlimited government. The second with gold providing independent adjudication of extreme policymaking.

The key is extreme policymaking and extreme swings in bonds and stocks on the upside and precious metals on the downside. Financials, including Utility stocks, reached measurable excesses in April.

As noted, this was an outstanding set up for a dramatic reversal in May.

This also set up an important philosophical issue. Was the bond crash due to Bernanke’s mutterings about “tapering” the bond-buying program?

Or was it the natural consequence of excessive speculation going into another fateful May? It worked for us in the summer of 1998 as well.

Our view as our indicators soared in April was that “Mother Nature would preempt the Fed’s decision”. This has been the case and the Fed’s only option has been a flimsy attempt to look “in charge” during a bond crash that, by one measure, was worse than the 2008 example.

Interventionist policymaking truly is the theatre of the absurd.

The big Rounding Top is still on.

The high for the S&P was 1687 set on May 22nd and there has been descending highs and lows since. The panic in bondland got overdone a couple of weeks ago and the overall relief has popped the S&P to the 1626 level. The previous high was 1654, and the June low was 1560.

Generally markets could be somewhat positive into July and the S&P could trade above the 1654 level. Breaking below 1560 is probable and would be important. It would formally mark the end of the cyclical bull market that began as the crash ended in March 2009.

It is worth emphasizing that corporate management and earnings reports, central banks and their cheerleaders are all subject to market forces. The May convulsion is another reminder that credit spreads and the yield curve force change in the stock markets, and once again history has shown that at crunch time the Fed has little influence on spreads and the curve.

Continue to sell the rallies.

Crude oil jumped to 102 on yesterday’s “Coupe” in Egypt. This did not break to the Upside on the “Big Triangle” chart. Independent of this, Ross has a chart that has been looking for a high in first part of July.

Important gains in oil reserves and increases in production due to fracking will continue. Other than lowering the real costs of petroleum products it will reduce the premium of Middle East Risk. Diminishing revenue will reduce the ability of Islamists to spread their version of radical utopianism.

In the Western World it will also reduce the ability of governments to impose their versions of radical utopianism. Wind turbines and solar panels–anything but something provided by evil oil companies has been a mania. Not to overlook the mania against nuclear power.

Technically, the remarkable zoom to 147 in 2008 registered a Weekly Upside Exhaustion in the third week of that fateful June. We noted that it indicated the possibility of a cyclical bear. Also noted was that if the action continued to the end of the month and registered on the Monthly it would indicate a secular bull market had completed and a secular bear would follow. The spike ended at 147 on July 11.

The slump into the April low touched 30 on the Daily RSI. The rally could top in the first part of this month and the last two weeks has been outstanding. The RSI is up to 68 and perhaps 70 would end it.

The latest rally has been assisted by the end of the mini-panic in the credit markets.

Then crude oil prices will be facing the prospect of the next credit crisis that could become evident in September. Over time, it will also be facing an increase in production and pricing presures similar to that recorded by natural gas.

Unresponsive to Middle East problems, other commodities declined with the mini-panic. Base metals (GYX) slipped to 323, which extended the bear that started at 502 in early 2011. However, relief in credit markets has prompted a rally. Relief could run for a few weeks more.

The decline in the grains (GKX) took out the low of 281 set last June just as the drought was starting. Technically, this sets the cyclical bear that started at 382 in March 2011.

Relief in the credit markets could allow a rally for a few weeks.

Link to July 5, 2013 ‘Bob and Phil Show’ on TalkDigitalNetwork.com:  This shows up in the sunspot number.

 The recent minimum was the lowest since 1913.

 Solar cycle #24 has been the weakest in over one hundred years.

 This is the main reason why there has been no increase in temperatures over the past 16 years.

 Sunspot counts in the 1960s and 1970s reached the highest in 1,000 years.  Global temperatures have not yet been as high as recorded with the Medieval

Optimum that ended in the early 1300s.