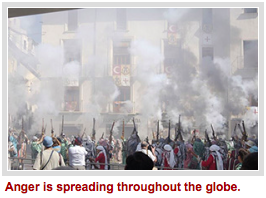 A specter is haunting the world … and it’s NOT the specter of Communism.

It’s the specter of war … bloody regional and civil wars like we haven’t seen since the 1930s … wars that may soon wreak havoc with your finances … further erode your civil liberties … and maybe even endanger your personal safety. From Istanbul and Rio de Janeiro to Syria and India, the world’s Internet-connected masses are rising up against incompetent, corrupt, increasingly authoritarian governments … and the results will NOT be pretty.

For most of this century, I’ve been reporting on the global financial markets while based in Bangkok, Thailand.

Living in Southeast Asia, just a few hundred miles from China’s southwestern border, has given me a unique perspective on world events and access to news about imminent wars that is rarely, if ever, reported in U.S. media outlets.

I believe we are now on the cusp of what will be the single most important economic events of our lifetime — events that will shape your financial future, and the financial future of all those you care for, for the next 50 years. I’m talking about a series of cascading regional wars and terrorism.

Hundreds of millions of people — in the Middle East, Europe, Asia and South America — are already starting to revolt against the economic misery imposed by their authoritarian governments.

These regional conflicts and civil wars are going to do two things:

First, they are going to unleash the full fury of heavily armed, increasingly authoritarian governments — new Big Brother states all over the world — that now track nearly everything we write, say, buy or even think.

Second — and most surprising of all — this new cycle of warfare will also coincide with the last stock and commodity market booms of our lifetimes — booms that too many ordinary investors will miss out on due to bad advice and even blind panic.

Now mind you, I am not a politician, or a military expert. I am a student of history, a student of human behavior, a student of the markets, and I have an avid thirst for understanding how societies and cultures are cyclic in nature, inevitably causing history to forever repeat itself.

I won’t get into too many technical details today. Suffice it to say that over the past 30 or so years, I have devoted a substantial amount of my time to studying the cyclical nature of war, and what I have found is simply astounding.

You see, just like business cycles, or various different economic cycles, the waging of war within and between nations has definite, identifiable rhythms.

In my research on war, which has covered more than 5,000 years of war data, I’ve found that there are three distinct cycles to war.

The 53.5-year cycle can be seen in this cycle chart here.

As you can clearly see, the 53.5-year War Cycle nailed major turning points …

The U.S. entry into WWII

Rose during the Korean and Vietnamese Wars

And bottomed in 1995, right around the middle of the “Peace Dividend,” which resulted from the initial fall of Communism in the former Soviet Union and the opening up of China’s communist economy.

The 53.5-year cycle has been turning up ever since. It is now clearly picking up momentum and strength, as evidenced by all the recent horrible events all over the globe.

We are right on the edge of seeing the war cycles turn violently higher, heading all the way up into the year 2020/21 before any lull is found.

What kind of war(s) could we be facing? It could be …

Or any combination of many or even all of the above!

It’s coming. You can see it everywhere.

And it’s going to impact markets in ways you simply must prepare for. It will likely drive U.S. equities sharply higher. It will be the main trigger for gold and other commodities in their new bull legs higher.

Or help you become richer than Midas.