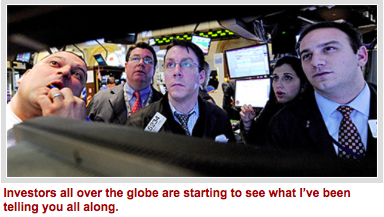 And which I’ve been predicting since late 2015.

The velocity of the damage was even worse starting the day after the U.S. elections through December 15 — as I am penning this column early due to upcoming travel plans and the holidays …

But it’s not just the 10-year interest rate that is rising. Rates on everything from two-year to 30-year terms are soaring. Plus, they’re not just rocketing higher in the United States. Interest rates are soaring all over the world.

So why are rates surging? The answers are simple: First, investors all over the globe are starting to see what I’ve been telling you all along: that the sovereign bond markets of Europe, Japan and the United States is the world’s biggest financial bubble ever and it’s bursting.

There’s simply no way investors are going to keep putting money in bonds with rates so low and Western-style socialist governments’ balance sheets in such horrible shape.

The selling is hitting the bond market from virtually every angle. Overseas investors in our bond market, our creditors, are getting out as fast as they can. According to latest data, they dumped a net $403 billion in U.S. Treasuries over the past 12 months.

Second, bond investors no longer believe central banks can contain the interest rate rise. They’re right. No matter what the Fed says or does, it will not be able to control the actions of tens of millions of investors. Or the actions of the free market.

When the free market forces take over and decide that U.S. bond markets are no longer a safe place to invest, as they are doing now, it’s lights out for Treasuries.

Third, and part and parcel of the interest rate rise, is the loss of confidence and wealth investors are now experiencing in sovereign bonds. That’s the ultimate motivation for dumping bonds.

Fourth, they’re worried — rightfully so — that President-elect Trump is going to hammer trade concessions from our big trading partners who are also our biggest creditors: Germany, the European Union in general, Japan and of course, China.

Fifth, and even more worried, are precisely our largest creditor nations. The EU, Japan and China. They know darn well Trump is going to squeeze them and renegotiate our debt. So the treasuries and central banks of those countries are likely already dumping our bonds.

I for one, am overjoyed bonds are crashing
and interest rates are rising.

Not because I might be able to earn more interest on idle cash. But because of the significance of crashing sovereign bond prices.

I have pounded my fist on the table about this all year. It should be music to your ears because …

A. It means trillions of dollars will be on the move, shifting mainly out of sovereign bonds and into U.S. equities, and lighting the force behind my Dow Industrials 31,000 plus forecasts for the next two years.

B. It also means that money and credit will start to move again in the general U.S. economy, that its velocity of turnover will improve, its heartbeat, bumping inflation a tad higher.

And how important is that? For investors, it’s critical.

It means further increases in the major stock indices. That I’ve made abundantly clear, several times. Even a tiny boost in inflation right now is a positive for stocks.

It means a rebirth of the commodity SuperCycle. It was never dead to begin with. It merely took a long pause.

But now, with the bond market tanking and the cost of money and credit rising, causing inflation to rise, we should soon see some major strength in the entire commodity sector, which is great news for tangible asset investors.

It means a rebirth of gold’s great bull market. Mind you, inflation is one of the least dependable and weakest forces to drive a bull market in gold.

The far more bullish force for gold is the loss of confidence that both small investors and big money have in government.

And that in turn is reflected in how aggressively they are dumping sovereign debt issues, and heading for safer hills.

But soon that tsunami of cash leaving sovereign bond markets will also be flooding back into tangible assets, and largely into gold.

So I implore you to keep the longer-term in perspective: Commodities and stocks are going to explode higher in the months and years ahead, and they are going to do it at the same time.

Best wishes, and have a wonderful holiday!

P.S. Time to pack your “bug-out bag” and run? Or would you rather get rich? Well, some people have built a little cabin in the woods. They’ve stocked it with food, guns, and ammunition. They call it a “bolt hole.” You know what? It’s not such a bad idea! But it’s not for everyone.

I’ve got a better way to protect myself. And you do, too. The answer is to get rich. Rich enough to weather the storm and keep your assets out of danger. The best defense, in other words, is a good offense. And guess what? The K Wave itself will give you the perfect way to do that. -Make sure to click here to download my new free report Stock Market Tsunami!