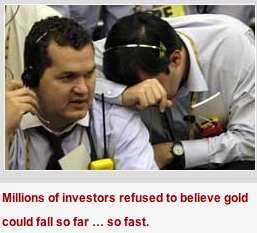 Millions of investors have been skinned alive in the gold market. They got married to their positions and failed to realize that gold is like any other market. What goes up, must also pullback.

Even some of the savviest investors in the world got killed in gold. Billionaire investor John Paulson lost as much as $600 million in last week’s gold rout and nearly $1.5 billion since gold peaked in 2011.

Even the central banks have been pounded by gold, losing an estimated $560 billion in last week’s gold rout.

That’s just the big investors. It doesn’t count the tens of billions of dollars lost by average investors all over the world.

Fortunately, those following my analysis are not among them. I have been consistently bearish gold for well over a year now, and anyone following my work either avoided huge losses …

Or even better, acted on the more specific advice I’ve given in my paid publications, went short via futures or inverse ETFs on gold, and cleaned up big time.

When investors in any market are in denial about what’s happening, it’s virtually a sure fire sign that the current trend is going to continue. Why? Because they’ve suspended all semblance of logic and they’ve become so irrational that they can’t see the forest for the trees.

For instance, in gold right now you have three types of investors …

1.  Those who believe gold was “ambushed” by big investors who wanted to trash the market and inflict losses on small investors.

But if that were true, then why did all the big investors I mention above lose so much money? Surely, they would have gotten wind of the ambush and been able to avoid a big portion of the actual losses they took, wouldn’t they?

2.  The gold investors who believe the gold market is “manipulated” by a combination of big investors, politicians, and central banks set on pushing the price of gold down to “keep a lid on inflation,” or at least the perception that inflation is out of hand.

But if that were true, then again, why did so many big investors take such big losses? And why did central banks lose as much as $560 billion?

Central bankers are not the smartest traders in the world, but they’re certainly not dumb and stupid.

3.  And then, there are the gold investors who refuse to believe that there are deflationary forces at work, and they claim that gold has lost touch with reality, and that the current decline in gold therefore represents the buying opportunity of a lifetime.

Again, that’s denial, plain and simple. It’s touted by analysts and investors who refuse to believe that a market can — and must — go down, even if it’s just setting the stage for the next bull leg higher.

Look, markets never go straight up year after year as if there’s nothing but blue skies ahead.

The fact of the matter is that the biggest, strongest bull markets are those that correct violently, shake out all the weak and even strong long positions and buyers …

And clear the air for new buyers to come back into the market.

So if you’re a real student of the markets and a real gold bug, then this violent correction that has occurred in the gold market should have been expected, and further, should be music to your ears!

For in the end it is about the best thing that could have happened in the gold market.

It will allow the gold market to refresh itself, to reenergize, and to set the stage for a massive new leg to the upside.

Right now, you should expect a bounce in gold. But as I said in my special Money and Markets column of April 15 …

Gold’s Historic Collapse Is NOT Over

On the downside, I repeat the key support levels you should be watching:

Each of the above levels should temporarily hold once they are hit. But based on my system models, I repeat my warning of my April 15 special column: Gold will likely not bottom until it hits major long-term support at $1,028.

And most important of all, do not be tempted to buy any gold, or silver, or mining shares, until I give you the all-clear!

Instead, let those who are in denial about gold’s correction continue to get their head handed to them.

When they finally realize that all their theories about gold market manipulation and ambushing, central bank shenanigans to depress the gold price, and more of such conspiracies …

Are nothing but gobbledygook, then gold will finally bottom!