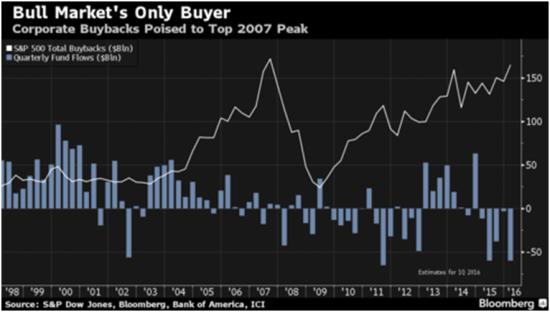 Anyone who doubts that the global financial system has run out of (good new) ideas has only to track the recent words and deeds of central bankers and mainstream economists: Slightly-negative interest rates didn’t lead people to borrow more? We’ll go more negative! Buying up all the government bonds didn’t prevent deflation? We’ll start buying corporate bonds and equities!

Still, it’s shocking to see where this endless repetition of the same actions takes us. A recent Bloomberg article, for instance, notes that even though corporate profits are falling and individual investors are dumping equity mutual funds, company share buybacks are surging:

Demand for U.S. shares among companies and individuals is diverging at a rate that may be without precedent, another sign of how crucial buybacks are in propping up the bull market as it enters its eighth year.

Standard & Poor’s 500 Index constituents are poised to repurchase as much as $165 billion of stock this quarter, approaching a record reached in 2007. The buying contrasts with rampant selling by clients of mutual and exchange-traded funds, who after pulling $40 billion since January are on pace for one of the biggest quarterly withdrawals ever.

“Anytime when you’re relying solely on one thing to happen to keep the market going is a dangerous situation,” said Andrew Hopkins, director of equity research at Wilmington Trust Co., which oversees about $70 billion. “Over time, you come to the realization, ‘Look, these companies can’t grow. Borrowing money to buy back stocks is going to come to an end.”’ “Corporate buybacks are the sole demand for corporate equities in this market,” David Kostin, the chief U.S. equity strategist at Goldman Sachs Group Inc., said in a Feb. 23 Bloomberg Television interview. “It’s been a very challenging market this year in terms of some of the macro rotations, concerns about China and oil, which have encouraged fund managers to reduce their exposure.”

Should the current pace of withdrawals from mutual funds and ETFs last through the rest of March, outflows would hit $60 billion. That implies a gap with corporate buybacks of $225 billion, the widest in data going back to 1998.

Another recent Bloomberg article highlights the emerging school of economic thought that says governments’ big mistake of the past decade was to borrow and spend too little:

Ignored for Years, a Radical Economic Theory Is Gaining ConvertsIn an American election season that’s turned into a bonfire of the orthodoxies, one taboo survives pretty much intact: Budget deficits are dangerous.

A school of dissident economists wants to toss that one onto the flames, too.
It’s a propitious time to make the case, and not just in the U.S. Whether it’s negative interest rates, or helicopter money that delivers freshly minted cash direct to consumers, central banks are peering into their toolboxes to see what’s left. Despite all their innovations, economic recovery remains below par across the industrial world.

Calls for governments to take over the relief effort are growing louder. Plenty of economists have joined in, and so have top money managers. Bridgewater’s Ray Dalio, head of the world’s biggest hedge fund, and Janus Capital’s Bill Gross say policy makers are cornered and will have to resort to bigger deficits.

“There’s an acknowledgment, even in the investor community, that monetary policy is kind of running out of ammo,” said Thomas Costerg, economist at Standard Chartered Bank in New York. “The focus is now shifting to fiscal policy.”

Currency Monopoly
That’s where it should have been all along, according to Modern Money Theory. The 20-something-year-old doctrine, on the fringes of economic thought, is getting a hearing with an unconventional take on government spending in nations with their own currency.

Such countries, the MMTers argue, face no risk of fiscal crisis. They may owe debts in, say, dollars or yen — but they’re also the monopoly creators of dollars or yen, so can always meet their obligations. For the same reason, they don’t need to finance spending by collecting taxes, or even selling bonds.

In the U.S., one presidential candidate is at least listening to MMT economists. Advisers to Bernie Sanders include some of the school’s leading advocates: Stephanie Kelton, a Sanders hire to the Senate Budget Committee, and James K. Galbraith, whose father helped shape President Lyndon Johnson’s “Great Society” programs.

At first glance, corporate share buybacks and a theoretical debate over fiscal policy might seem like unrelated developments. But in reality they’re both parts of the meta-trend of policy makers becoming lab rats obsessively pressing the bar that used to dispense treats, even though the treats have run out.

Corporations buying back their shares at record prices while their profits are plunging (thus requiring them to buy at the top on margin, a classic dumb-money behavior) are doing something that has failed miserably at the peak of most previous business cycles. Yet corporate treasurers and CEOs, despite being old enough to remember several such cycles, are still compelled to press the bar because they have no other way of quickly goosing the share price — and thus the year-end bonus pool.

Economists who want governments to run bigger deficits financed with newly-created currency seem to miss the fact that today’s policy is already pretty much that. When a central bank buys most of the bonds its government issues, that government is in effect financing itself directly through money printing. So Modern Monetary Theory is being tried on a vast scale as this is written.

And so far, this combination of massive deficits and multi-trillion-dollar bond purchases isn’t working. Inflation is negative in huge sections of the world and growth is anemic at best pretty much everywhere. But here again, that bar is just so tempting because back in the 1950s or 1980s or whenever it yielded such tasty treats. So we get the spectacle of the BoJ and ECB running out of government bonds to buy and turning to corporate bonds and equities, thus directly financing even more than their governments’ deficits.

The implication is that these ideas will be taken farther than ever in coming years. And their inevitable failure will be commensurately epic.