Miners Can Double or Triple Within Nine Months 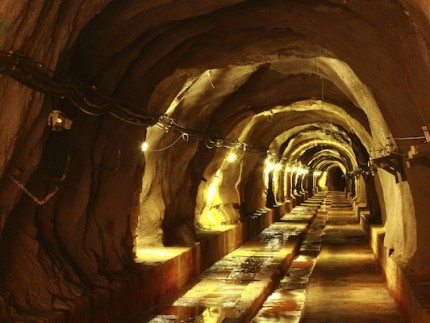 First published Sat Sep 17 for members:  Yes, you heard me right.  The miners are setting up in a pattern which can see them double within the next nine months.  So, let me explain.

But, before I get into that explanation, I want to preface this write up by saying that I put a lot of thought into where I believe we are in this complex, and will try to convey my thoughts with as much detail as possible.  So, it may take several readings to understand what I am saying, since I am providing you with all the information I have been considering before I came to my conclusions at the end of the write up.

With the current action we have been experiencing over the last month, it seems as though the GDX has completed 5 waves off its January lows, which I have classified as wave i.  That means that the current pullback is likely a wave ii, with the alternative being wave 2 of iii (noted in yellow).  And, since my biggest complaint about this market in 2016 has been that we have not had a clearly defined 2nd wave pullback, the market may be providing me with a “gift.”  You see, once we have a clearly defined i-ii structure in place, our Fibonacci Pinball method will be set up to provide rather accurate guideposts once this correction runs its course, and we break out to higher highs.

Within a 2nd wave, the market will usually drop to the .382 retracement of the prior 5 wave structure in the a-wave of the 2ndwave.  Thus far, what we are counting as the a-wave of this wave ii has come up a bit short of the .382 retracement, which is located at 24.38.  Now, when the market comes short of a Fibonacci target, we often see the (b) wave of the following wave structure striking the appropriate target.  That means that the (b) wave of the b-wave can very well strike that target before we see a (c) wave rally.

But, keep in mind that these are simply the “standards,” which means, by definition, there will be outliers at times.  And, since this larger corrective structure, when complete, suggests that we “should” see at least the 22 region (.500 retracement) as a target for the entire wave ii, one should treat any rally in a (c) wave of a b-wave as an opportunity to hedge their portfolio, rather than attempting to trade that structure to the upside in an aggressive fashion.

Ultimately, it would take a break down below the .382 retracement of 24.38 to provide more certainty that the market is heading directly down to the 22 region to complete the c-wave of wave ii sooner rather than later.  So, you may consider me foolish, but I have to abide by standards, and am still looking for that rally to complete a “standard” b-wave, which needs a (c) wave rally to commence quite soon.  Moreover, Dr. Cari Bourette, of MarketMood.net, is also expecting higher in the upcoming week based upon her gold market sentiment analysis.  In fact, she even has the potential for the entire correction to imminently complete.

Now, as far as the c-wave is concerned, the most common target for the c-wave is the 1.00 extension off the top of the b-wave, where a=c.  And, if the b-wave is now in place, then the a=c overlaps right at the .500 retracement in the 22 region. That is what we call “confluence.” The second most common target is where the c-wave is equal to 1.382 times the size of the a-wave, off the top of the b-wave.  And, that overlaps with the .618 retracement of wave I in the 19.80 region. Yes, this is another point of “confluence.”  All of this suggests that, as it stands now, the maximum I would be comfortable with is the 19.80 region for wave ii.  Anything below that region increases the potential that the lows in the market have not yet been seen.

This is where the larger degree projections to the upside come in.  Assuming that the 19.80 region holds as support, it suggests that the minimum target for wave iii in the 1.618 projection of waves i and ii is in the 51 region.  Again, this assumes that we drop no further than the 19.80 region, and also strike the standard target for a wave iii on the upside.  However, since it is quite possible that we hold the 22 region, and since the metals complex often strikes extensions beyond the 1.618 for its 3rd waves, it would suggest that the wave iii of a larger degree wave (1) would likely target the 55-60 region.

Furthermore, since wave i took approximately 6 months, and wave iii is often stronger than a wave i, it would suggest that wave iii can also complete within 6 months, and potentially earlier once wave ii completes.  And, assuming that wave ii can still take us another several weeks to another month or so, we should easily be able to double, and maybe even triple in the GDX within the next nine months, as long as we hold the 19.80 region for wave ii.

This also suggests that within 12-15 months, we can challenge and potentially even slightly exceed the 2011 highs in the GDX to complete the larger degree wave (1), which should kick off a multi-month wave (2) pullback.  This would also provide an extraordinarily high probability signal that a multi-decade bull market in this complex is underway.

As far as the underlying metals themselves, they seem to be within a slightly more accelerated bullish path, but which can still take them back towards their 2011 highs within the next year as well. While the GDX seems to be in a i-ii structure, the count I have been following in the GLD and silver is a i-ii, 1-2 structure.  While the GDX is still within its machinations for its wave ii, I have the same relative count for the wave 2 of wave iii in GLD and silver, in other words, still likely needing more of the correction to fill in.

Therefore, the way it looks at the moment, the wave 2 of iii correction in the metals does not yet look complete.  As with the GDX, while we may see an immediate continuation lower to complete the c-wave of wave 2, I believe the silver chart may be suggesting we see a rally before that c-wave down takes hold.  As you can see from the attached 144-minute chart, every time we have had this positive divergent set up on the silver 144-minute chart MACD, it has portended the commencement of a strong rally.  This has been the case for each and every rally we have experienced in 2016.  Will it fail this time?  This I cannot answer, as I only deal in probabilities and not certainties.  And, each and every time we have had this set up in 2016, we have seen a rally.

In conclusion, due to the “standards” we ordinarily see in the market, the silver 144-minute chart signal, and Dr. Bourette’s market sentiment analysis, I am still going to look for another rally to take hold as long as the GDX is over 24.38.  Moreover, I am going to assume that rally is going to be the (c) wave within a b-wave corrective rally, setting us up for one more drop in the c-wave of wave ii.

Alternatively, should the next rally see GDX and silver break out to new highs over their August highs, and the GLD break out over 132, before seeing that c-wave down, then I will assume the correction has completed, will stop out of all my hedges, and expect that we are on our way into the heart of a 3rd wave rally in the metals complex.

See charts illustrating the wave counts on the GDX, GLD and Silver (YI) at https://www.elliottwavetrader.net/scharts/Charts-on-GDX-GLD-Silver-YI-201609181373.html.