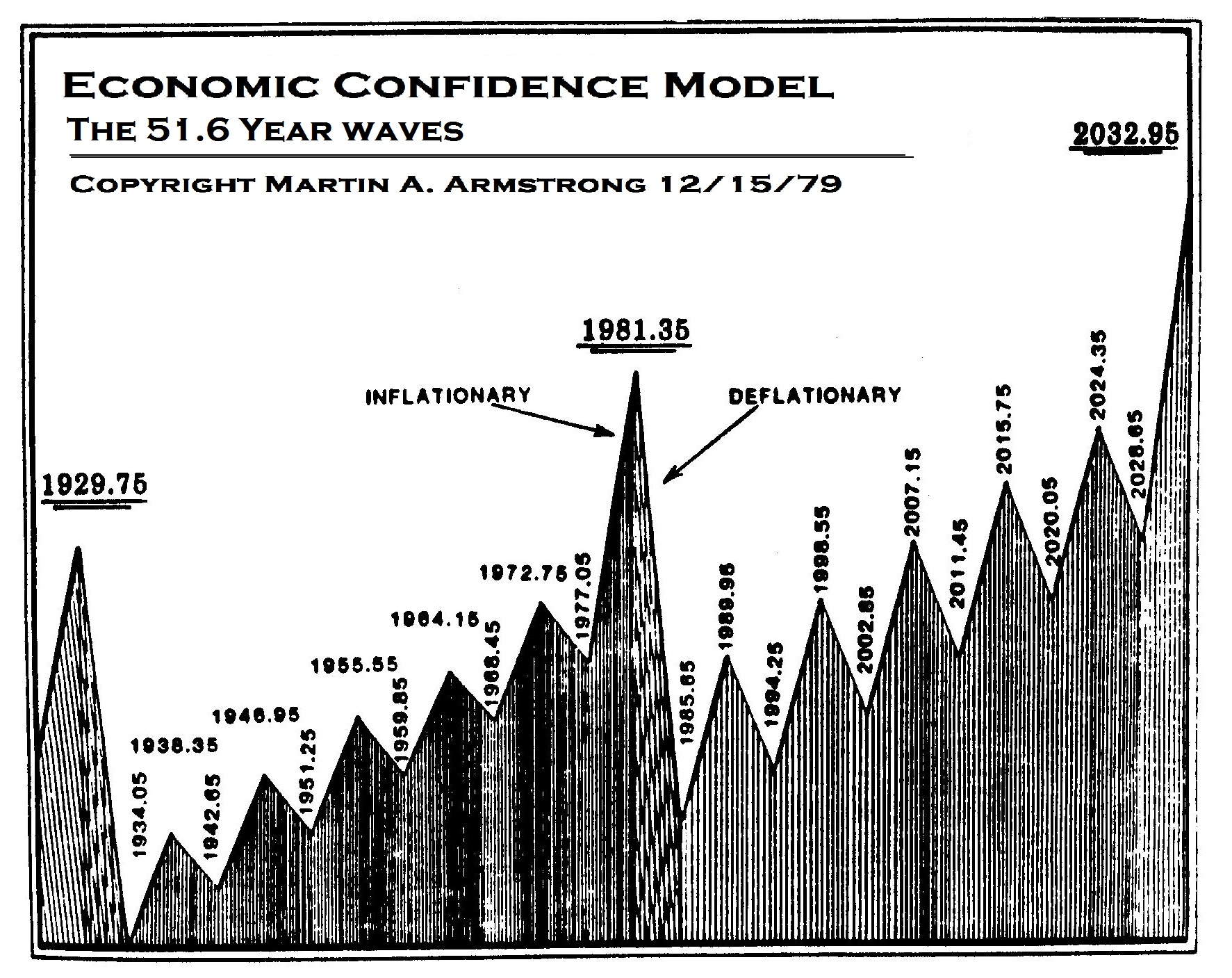 Cycle targets that we provide are TURNING POINTS. This means an event normally takes place at that time be it a high or low. If ideally something should produce a low but does not and produces a high, it is typically extending the cycle to the next TURNING POINT. It looks at this time that the next important turning point is the week at the start of Sept. There is of course the Fed meeting. But then there is trouble among debt ridden nations and then there is Iran.

Keep in mind that for some strange reason, geopolitical evens tend to also happen in the Aug/Sept time frame. Besides war, there was even 911. On 28 June 1914,Archduke Franz Ferdinand of Austria was assassinated. World War I began officially 28 July 1914 and lasted until 11 November 1918. It was August when things really got underway. World War II began when Germany attacked Poland on September 1, 1939. Most stock market crash events take place after highs in early Sept such as 9/3/1929. Even the 1987 Crash 10/19/1987.What it is about this time of the year who knows. Where December is the time to be jolly, Sept is the time for chaos. Never look for a particular event high/low. It is a TURNING POINT that sometimes can invert and produce the opposite largely because everything is connected. It is always a action/reaction. In Rome, there was the Social War (91–88 BC) where citizens of Italy paid taxes but did not have the same respect and rights as those in Rome. We are likewise headed straight into a class-warfare struggle because government blames the rich for not paying their “fair share” when it is government that spends without comprehending what the hell they are doing. In Rome, this taxation without equal rights eventually erupted into the Social War just as the American Revolution took place as England sought to extract wealth unjustly.

In Italy today, the Prime Minister Mario Monti’s government has implemented a 20 billion euros ($25 billion) policy in austerity measures that is now causing the Italian economy to implode. The country is struggling with 1.9 trillion euros of debt and as everyone else in the West, there is no plan to pay it back and all governments are turning inward against their people threatening the very foundation of democracy itself. This is now all about government surviving and they see this as extracting funds from the people to pay the interest only to the bond-holders who demand austerity and higher taxes as their pound of flesh.

Prime Minister Mario Monti’s government is now implementing this 20 billion euros attempt to strip people of their wealth in austerity measures that are destroying the economy precisely as took place under Maximinus. We must understand that attacking the “rich” who are the class that create the economy by creating jobs (small businesses employ 70% of the civil work force), they cause capital to hoard and the money supply to actually contract simultaneously with higher unemployment as hiring takes a wait and see approach.

This trend of a collapsing velocity in money was self-evident also during the Great Depression when over 400 American cities were forced to print their own money – Depression Scrip. We are headed into a deep and dark vortex from which there is no escape. Government MUST revise the entire monetary system and restructure the debt. Italian demand for supercars is collapsing. According to Bloomberg News, the number of secondhand high- performance Italian cars that have been exported from Italy has exploded nearly tripling to 13,633 vehicles in the first five months of 2012, from 4,923 a year earlier, according to auto industry group Unrae as reported by Bloomberg. We are in such a serious position, it is NOT hyperinflation we have to worry about, it is the collapse of everything because government is too damn corrupt and refuses to even look at what they hell they are doing upon the advice of bankers. We cannot learn from experience, because we are ignorant of the past – history is the real catalog of solutions if we dare to look.