Posted by Martin Armstrong via Jim Puplava of Financial Sense 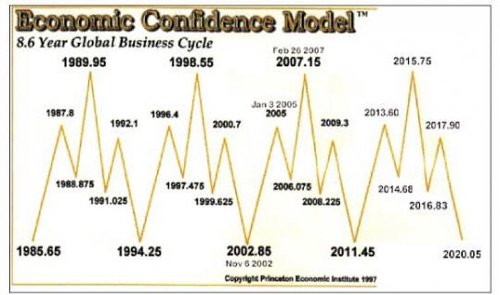 In this special interview, Jim Puplava sits down with Martin Armstrong, the esteemed global investor and creator of the widely-cited Economic Confidence Model (see image below), to address a number of myths floating around in the financial community. Here we present a few excerpts of our interview with Martin Armstrong airing for subscribers Friday, August 9th. Jim Puplava: Martin, there are many out there saying that we are either at or near a major top in the stock market and also warning of a catastrophic collapse. Do you agree with that sentiment?

Martin: If you just look back at all the major highs—1929, gold in 1980, any of the commodities; take a look at any chart—major highs are always associated with what are referred to as “spike highs”. We don’t have that in the stock market. And again, most of the analysis that people are hearing is largely from people that are focused only on the U.S. They are blind to what is happening globally, and it’s just an international economy…so, largely, the stock market has been pressing up because you have serious trouble out in Europe—it’s an absolute basket-case over there—and capital has been moving out. You have interest rates that have been so low, you have pension funds that are virtually on the brink of insolvency. And it’s been forcing them to go into equities where they’re at least earning 5-7% dividends. And essentially you have China starting to turn down; you have Japan where capital is starting to move out and go into South East Asia and creep back over here. So the stock market has actually been well supported. I mean there will be a correction here short-term, but [the market] has been crawling up toward major resistance, which is at 16,000, and we’ve not been able to get through. We should back off first and then, I’d say, we’re going to go back up and make major highs in this thing going into late 2015, to the point where the Dow may even double in value yet.

Martin: No. Most of the analysts out there calling for a crash keep saying, “See, [the market] can’t possibly be going up—I’m right. It’s going to happen any day now.” And, that’s not a high. I mean, I was in Tokyo when the market was peaking there and you had the Nikkei at 40,000. The last week people were saying, “100,000—that next.” When gold was reaching $875 in 1980, people were saying, “$1000.” And silver was at $54, people were jumping to “$100—absolutely.” We don’t have any of that. So this market is far from being at a major high [in terms of sentiment]. We are going to go up significantly. And then you’ll draw everybody in and then we’ll see the crash, but that’s probably 2016.

Jim: You mentioned China, the problems in Europe and Japan, which has actually helped capital flow into the U.S. Additionally, there have been calls for a dollar crash. Let’s talk about the dollar and why you feel a dollar crash at this point is unlikely.

Martin: Well, again, you have these people that are running around and have been calling for the dollar to collapse all because the Fed increased the money supply and all this other nonsense; but they fail to understand that there are two sides to every coin. Yes, we had a tremendous crisis coming out of ’07—the Fed pumped in $700 billion—but you also have to take into consideration how much was lost. So, the deleveraging was actually about three times as large as what they put in. That’s why you didn’t see any inflation, and you’re not really going to. Also, because, the dollar is really the only currency in the world you’re going to use…there is no alternative at this point.

The remainder of this audio interview will be available for subscribers Friday, August 9th on the Newshour page. To gain full access to all our premium interviews and content, pleaseCLICK HERE to subscribe.

In the rest of this interview, Martin also explains:

Cited by Barron’s as one of the top financial websites to visit on the weekend, Financial Sense provides free educational resources to the broad public audience through editorials, current news and resource links on salient financial market issues. Begun in 1985 as a local talk radio program, Financial Sense Newshour is now a free weekly webcast with host Jim Puplava and top financial thinkers.