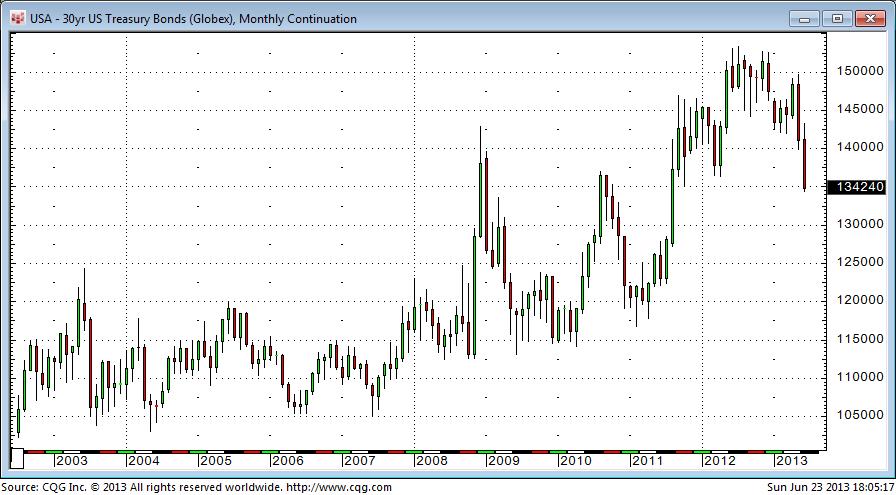 The bond market had its worst week in many years last week as yields soared following the June 19 Fed meeting and Bernanke’s Q+A…and as bond prices tumbled so did stocks, gold, foreign currencies and commodities…while the US Dollar soared. You might ask, “Was anybody really all that surprised by what Bernanke had to say? Don’t you think that the market has over-reacted?” Well, in terms of Rational Expectations, perhaps the market has over-reacted…but…in terms of Market Psychology Bernanke’s June 19 comments, just like his comments on the May 22 Key Turn Date, were not the “Cause” of the market price action…they were just the “Catalyst” for a market that was dangerously “out of balance”…and the price action last week adds to my conviction that the May 22 KTD signaled a Major turn in Market Psychology.

My definition of a Key Turn Date is when a number of different markets reverse course on or around the same date due to a (dramatic) change in Market Psychology. Such a “Reversal” implies that Market Psychology was “overdone” prior to the reversal. For instance, if bullish Market Psychology had become WAY overdone prior to the May 22 KTD…on the back of expectations of more and more easy money…then the slightest hint that the supply of easy money would diminish would catch the market “wrong-footed” and precipitate a scramble to rebalance.

I think the essence of the current “rebalancing”  in the markets is leverage reduction…either voluntarily or otherwise. The price action June 19 through 21 when stocks, bonds, gold, commodities and foreign currencies all fell at the same time looks like deleveraging….likely forced in some cases. From the perspective of Rational Expectations the hard sell-offs appear to be over-done…at least in the very short term.

One aspect of Market Psychology: When a market is rising and a Player is long…using leverage to add to his position…he knows that he is right and he knows that he knows what is going on…when that same market reverses and starts to fall the Player begins to doubt his “knowingness”…and as his losses mount he becomes convinced that “somebody” knows something that he doesn’t…so he either cuts his position or shifts into fear, anger and denial.

I believe that the dominant feature of Market Psychology for the past few years has been that Players assumed that the Fed and other CBs “had their back”…the Bernanke put etc…but if the Last Buyer has been discovered, and a Major Top was made on May 22, then Players may start to doubt their “knowingness” about CB policies and edge closer to the exits.

Players have “added to their positions” through various forms of leverage during the bullish phase of Market Psychology and “edging closer to the exits” may simply mean reducing leverage…pulling back from emerging markets, for instance, or taking a little money off the table…and in these circumstances, Market Psychology may become increasingly bearish.

Was the sell-off late last week overdone? It depends on your time frame…you have to keep the time frame of your trading in sync with the time frame of your analysis…for instance, I can imagine that the 6 month leg higher in US and European stock indices…from KTD Nov 16 to KTD May 22…courtesy of the Japanese “cherry on top” liquidity injections into world markets…was the LAST LEG higher and that global stock indices are headed lower over the 6 month time  horizon…or more…that interest rates made their lows in 2012 and are headed higher…and so is the USD.

The bond market had a very RARE Monthly Key Reversal Down in May…reversing the “hope” that was in the April “buy the dip” rally. Not surprisingly, the bond market has continued down in June…last week was its worst week in at least 10 years. The ratio of gold to gold shares rose to a 12 year high…with gold shares falling closer to their 2008 lows. This blog has repeatedly warned against buying “cheap” gold shares. The S+P registered a Weekly Key Reversal Down last week continuing the downtrend begun on KTD May 22. The VIX jumped to its highest level in over a year last week (save for 2 days at the very end of 2012) but the VIX rally seemed to peter out late on Friday, June 21…perhaps indicating that the sell-off was overdone. Perhaps. WTI Crude oil had a Weekly Key Reversal Down last week after trading up to its best levels in nearly a year. My view has been that bullish Market Psychology is in an uphill battle with growing supply…and perhaps with a global downturn in demand…and its best “hope” is for Mid-East geo-political risk premiums. The Euro currency had a Weekly Key Reversal Down last week after trading up to its best levels since February. I’ve been puzzled over “Why” the Euro has rallied since May 22…my best guess is that European banks are badly under-capitalized…that they have been reducing EM loans (EM markets and EM currencies have been weak) and repatriating funds home to Europe…boosting the Euro. The precedent for this “flow of funds” idea driving the Euro higher is similar to Japanese insurance companies selling overseas assets and repatriating capital immediately after the Tsunami in March 2011…driving the Yen higher. The Canadian Dollar had a RARE Monthly Key Reversal Down in May and has continued lower in June…hitting its lowest levels since November 2011. I’ve decreased my long term holdings of CAD in favor of USD. The Australian Dollar has tumbled over 14 cents from its early April highs…it’s a “proxy” for commodities and for China…its trading volume in the FX world (4th after the USD, Yen and Euro) is far above its “ranked” place in world GDP…it’s a high “Beta” currency and its decline since early April may have been foreshadowing bearish Market Psychology…on China and commodities. Emerging Markets stock indices have had 5 consecutive weeks down since the May 22 KTD…a graphic on how money is flowing away from the Periphery and back to the Center. …..to read the 12 messages Victor has taped to his market screen go HERE