#2 Most Read This Week: Markets Climb as World Faces Crisis 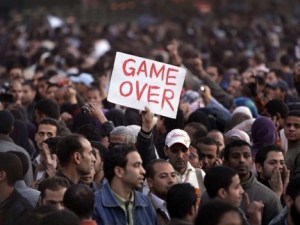 Kissinger noted that the era between 1948 and 2000 could be considered an “amalgam of American idealism and traditional European concepts of statehood and balance of power. But vast regions of the world have never shared and only acquiesced in the Western Anglosphere concept of order. These reservations are now becoming explicit, for example, in the Ukraine crisis and the South China Sea. The order established…by the West stands at a turning point.”

In the 20th Century, the Anglosphere was unsuccessfully challenged by Germany and Russia. The first German challenge ended with the abdication of the Kaiser in 1918. But Allied negotiators failed in a crucial test and set the stage for a brutal outcome. Although Germany was left unoccupied, its citizens were saddled with a very heavy debt load. These conditions were mutually incompatible. Soon a strong man emerged in Germany to try to throw off the Anglo yolk. Similarly at the end of the Cold War, the Soviet Union never was occupied, but hadnegotiated a peace. Implicit in the voluntary dismantling of the Soviet Union was the Russian understanding that NATO would not extend its membership to the former Soviet satellite states in Eastern Europe.

But fired with the heady feeling of apparent ‘victory’, the Anglosphere attempted to ‘bend’ the agreed Cold War peace terms by extending NATO membership to the Baltic States, Hungary, Slovakia, Romania, and Poland. It was no secret that the Ukraine was next on NATO’s wish list. Such an outcome would have been very difficult for Russia to accept.

Like the Germans, the Russians are a proud and tough people. While ‘acquiescing’, to use Kissinger’s term, they resented deeply this seemingly covert aggression by the Anglosphere. Under a tough, patriotic and charismatic President Putin, Russia apparently now seeks to regain some of its lost regional sphere of influence or empire. In this very limited sense, the Putin/Hitler comparison is apt.

Amazingly, the Obama Administration failed to recognize the Crimea and the land bridge to it, as a vital Russian interest. As a result, the U.S. Administration badly bungled the diplomatic response to Russia’s annexation of the territory. Far more serious is the probability that Anglo miscalculation can force greater cooperation between Russia and China and perhaps even Russia and Germany.

In his efforts to strike back at Putin, Obama’s choice of weapons defies practical sense. The trade sanctions seem to offer little except discord among the NATO allies. It was recently revealed that Germany was forced to negotiate secretly with Russia to ensure the continuation of some 40 percent of its winter energy supplies. Sensing these divisions doubtless has increased Putin’s ambitions. Now the entire Ukraine is in his sights. Over the weekend, news reports suggested a serious escalation of the conflict, which resulted in the Ukranian government shifting to a more defensive posture as Russian forces made serious territorial gains. More concerning, Obama’s misjudgments may push Germany increasingly from the Anglosphere towards the Asian sphere of Russia and China.

At the upcoming NATO meetings it is likely that, underlying some bellicose speeches, the real politicwill dictate an overriding need to find a face-saving ‘off-ramp’ or way of accepting Russia’s territorial hegemony over its “back yard.”

In the short-term, the flow of fear-money to the U.S. likely will continue and, depending on NATO’s decision, even increase. This could help drive the U.S. dollar, equities and Treasuries to new increasingly bloated highs. Over the medium term as anti-Russian trade sanctions bite harder, likely they will deepen the looming international recession. This may inspire central banks to enact still more aggressive monetary stimulation, taking financial markets yet higher.

In light of the increasing evidence that Keynesian monetary stimulation is failing to ignite meaningful improvement in the broad economy, central banks may be tempted to create even more synthetic money. However, given the failure of past QE strategies to do much good, some central banks may try novel approaches to liquidity injection. In late August, the Council on Foreign Relations published in its Foreign Affairs magazine an astonishing article entitled,

‘Print Less But Transfer More: Why Central Banks Should Give Money Directly to the People’.

Such open signs of Keynesian desperation might magnify fears of economic recession combined with financial hyperinflation, or stagflation, and bring precious metals increasingly into play. Further, it may threaten the U.S. dollar’s Reserve status.

In short, the order that has dominated global politics for much of the past century is facing a severe test on all fronts. Unfortunately, the current leadership in Washington is woefully lacking in strategic understanding and intestinal fortitude. This is exactly the wrong combination at the wrong time. The Anglosphere’s ineptitude may even overcome the best efforts of Janet Yellen and succeed in pushing the stock market into a much needed correction.