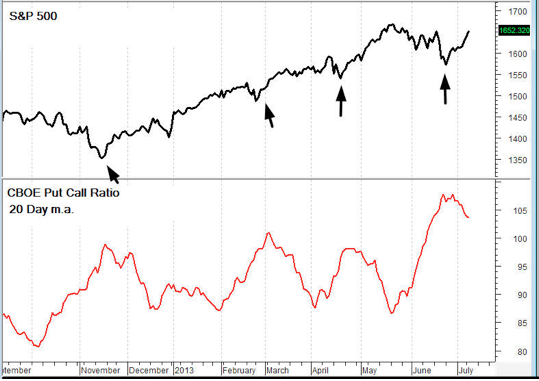 STOCKS: There wasn’t a lot of news to account for the rally on Tuesday. Some are suggesting that earnings will be better than expected. There was a release of funds to Greece and Chinese inflation was in line.

It’s kind of hard to imagine investors saying, “Hey Chinese inflation is not too bad. Let’s buy”. I think this is all part of a rise from a very oversold condition as we’ve been pointing out for the past couple of weeks.

GOLD:  Gold was up $12. This still doesn’t break the pattern of declining tops that has dominated the yellow metal for so long.

CHART: I hate to keep showing essentially the same charts, but right now the message is pretty convincing and we need to remember it. There is a lot of bearishness right now. The current 20 day moving average of the CBOE put call ratio is still above the levels of the last three trading bottoms. This tells us that the rally has further to go on the upside. This message is much more important than  Chinese inflation. NEWS AND FUNDAMENTALS: There were no important economic releases on Tuesday. On Wednesday we get the release of the FOMC minutes and a speech by Bernanke.

Michael Campbell’s interview of Timer’s Digest #1 Market Timer Stephen Todd about the markets on July 6th Money Talks. Michael starts out at the 3:25 mark asking Stephen about his perspective on the overall Stock Market, followed by Gold, Silver, Currencies, Interest rates and more: