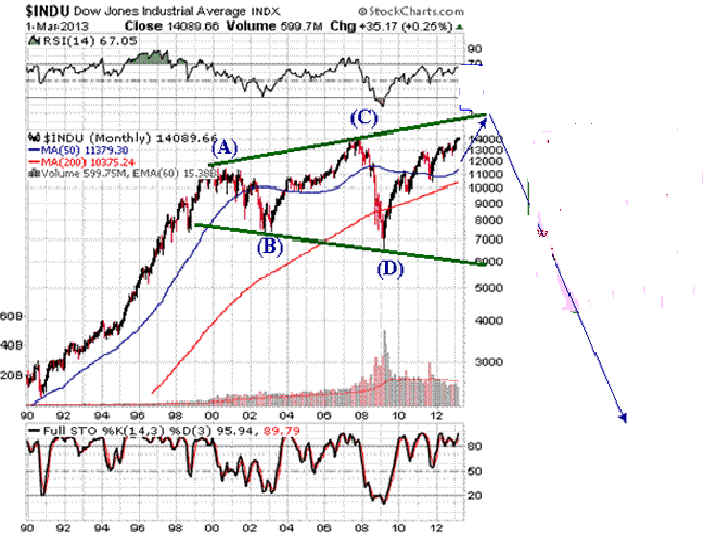 It’s been many years since a national political issue(s) impacted the markets. President Obama is facing some serious issues on several fronts and while he has up to now been a “Teflon” President, any one of these can have serious consequences for his Presidency (“despite” the vast major of the media being left-leaning).

U.S. Stock Market – The “rumor’ last week about an article to come out predicting an end to QE was IMHO a series of trail balloons to see how the markets would react to such a feat. I believe it’s a concentrated effort to lessen the blow if and when they actually attempt it (They also were able to snuff out a gold rally so they score some points).

Give the “Don’t Worry, Be Happy” crowd time, and they’re capable of spinning this to the point of its actually good for the market. TOUT-TV will lead the charge for them At the beginning of 2013, I used this chart to show why I continued to look for new, all-time highs in the DJIA. I stated it could rally to the top of the “Megaphone” resistance line, which is just under 16,000

We’re getting pretty close and given whet the downside target is afterwards, I strongly suggest not to look a gift horse in the mouth and hang around for the last 5% of the upside.

U.S. Dollar – Despite the air being let out of a tremendously overvalued Yen and the continuing saga in Europe, the U.S. Dollar is at best the “lesser-of-two-evils” at the moment.

Metals and Mining Shares – I spent yesterday at the “Metals & Mining Investment Conference” in New York City. I’ve been going to that show since the early 1990s. With no disrespect to the show organizers (they to a first-rate job), it was without a doubt the most depressing gold show I ever been to given its location and prices of metals themselves.

To start with, these shows are normally heavily-tilted to the bullish side. This time around, you could cut the bearishness with a knife. Ironically (and in my mind, a very bullish sign), two of the more ardent bears for the last decade (one of whom has made pretty much the same speech for the last decade that gold is over-priced by several hundred dollars… and has missed the first decade run-up), really piled on why they believe the bull market in gold has ended. Amazingly, the crowd which usually tends to be overly bullish was shaking their head in agreement and flocked to them after they were done speaking.

I appeared on a panel later in the day with one of them and while it was a very cordial exchange, I noted to the crowd this show had a bull’s versus bear’s debate every year and one could never find a bear. This time around, I was clearly the lone bull (and to those who say full of bull…).

The show also confirmed what I already experience by hearing from many readers interested in my alternative to traditional financial planning process and my own feelings – the retail mining and exploration shareholder is badly beaten up, depressed and looking for an out to end the suffering. This makes me think that even when we eventually have a rally, the rally will not induce new buying as much as it will be an opportunity to lessen this burden of ownership.

Only because I said it before and it proved to be just a “Gadhafi-like line in the sand move, I just can’t imagine the sentiment getting any worse. That’s the good news. The bad news is there’s nothing to say it can’t stay this bad and without a dramatic turnaround in the price of gold, I don’t see how the shares can rally much for the balance of 2013-UGH!

Ed Note: You Can Check out Peter’s Daily Update HERE