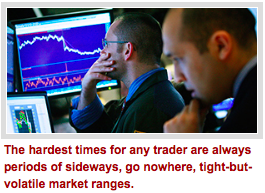 It’s times like these — sideways markets trading in tight-but-volatile ranges — that try the souls of traders and investors everywhere.

Most traders, always overly eager to trade, try to step in and out of these kinds of markets for very short-term profits. The typical end result of all their actions: Making their broker rich.

Then there are others who take on new long positions, thinking that it’s just a pause in existing trends and that by adding to positions now, they’re setting themselves up for a home run. When in reality, many markets are actually getting ready to change trend, violently.

The hardest times for any trader or investor are ALWAYS periods like the recent months of sideways, go nowhere, tight-but-volatile market ranges. And almost always the best, most-profitable course of action is not to push the markets, but to lie in wait, like a lion tracking and stalking its prey. And so it is with me. For all my paying customers, I am lying in wait, stalking the best opportunities, ready to jump on them before you can bat an eye, to help make oodles of money for them. Money that can be kept and built on, not money made in a flash in the pan that can just as easily go up in smoke.

With all that in mind, this week’s column is a follow up to last week’s market road map column. Let’s see just how much has changed in the most important markets of all, starting with …

A stinking $24 trading range, with no gusto, in a week’s time. No opportunities there, even for short-term traders. Maybe for day traders, but for overnight or position traders, nothing but noise.

Any changes in trend in gold? None whatsoever. Merely a sloppy, go nowhere mess. Worth sticking your neck out? Hardly.

The trend remains negative, with the next move likely to bring gold down to support at $1,202, then bust through that to the most important support level at the $1,180 to $1,160 level …

Where, if that happens, I expect to release a MAJOR FLASH ALERT.

All of the above general comments equally apply to silver, platinum and palladium.

Oil has opted to correct more than I had expected, staying below $39.25, and moving down toward the lower end of the trading range that I cited last week at the $36 level.

Overhead resistance still stands at $39.25 naturally, followed by $42. Overall, oil is doing what my neural net models called for, a largely sideways correction that will lead to a new level up in the spring to the $50 level.

Oil appears to be basing now, just below that $36 level, so don’t be surprised if oil soon takes off to the upside. Take advantage of it with any of the leveraged long crude oil ETFs.

Perhaps the most important market of all right now, and for the weeks and months to come …

The U.S. Dollar: Last week I told you how the dollar, as measured by the Dollar Index, was largely caught in a trading range for now, but within the context of a long-term bull market. Short-term support can be found at 93.197 on the Dollar Index, followed by 91.257.

Resistance will be found at 96.955 and then the former highs just above the 101 level.

Nothing has changed there. Over the past week, the dollar has traded in an extremely tight trading range, chopping up traders left and right and spitting them out as wounded animals.

And that is just the opening act of another major move for the dollar that will destroy even more investors and traders who continue, for some odd reason, to listen to all the pundits coming out of the woodwork who are again screaming about the death of the dollar — one well-known analyst, with alleged ties to the CIA, shouting the loudest, an analyst who has NEVER been right about any market let alone the dollar.

If you want to avoid losing money, simply ignore these harum-scarum analysts who don’t have a clue about real economic history and the forces that drive them. Listening to them is the fastest way to the poorhouse.

Chief reason: Deflation and the demise of …

The euro: Since last week, the euro has managed to eke out a new, short-term-range high at the 1.14385 level but there has been no change in trend to the upside.  Just a short-term spike higher, the euro essentially catching its last breath of fresh air before rolling over and dying.

The only thing holding the euro up, or should I say, suspending it in thin air, right now — is the fact that Janet Yellen has softened her tone on rate hikes here in the U.S.

But in the end, that won’t matter one bit. Yellen could lower rates here, and the euro will still meet its maker: It was a flawed currency from the outset, and now, every threat under the sun is combining at the same time to exploit the currency’s falls and take it under.

Dow Industrials: Last week, I told you the key resistance figures for the Dow Industrials are still the 17,901 and 18,500 level and …

Unless the Dow can get above both of those figures on a weekly closing basis, the bias toward the downside will remain the more probable path of direction.

Nevertheless, every indicator I maintain and every neural net and AI model I run on the major U.S. stock indices points to a rout that will take the Dow Industrials down to the 13,900 area.

P.S. One year from today, you could be cracking open a bottle of Dom Pérignon and feasting on caviar to celebrate the outrageous gains you’ve made in the bull market of a lifetime … profits that could let you retire early and rich! OR you could be kicking yourself, muttering, “I wish someone had told me this would happen and how to take full advantage of it.” Well, that’s exactly what I am going to tell you in this report! Click here for information!