Market Insight: The Really That Never Was 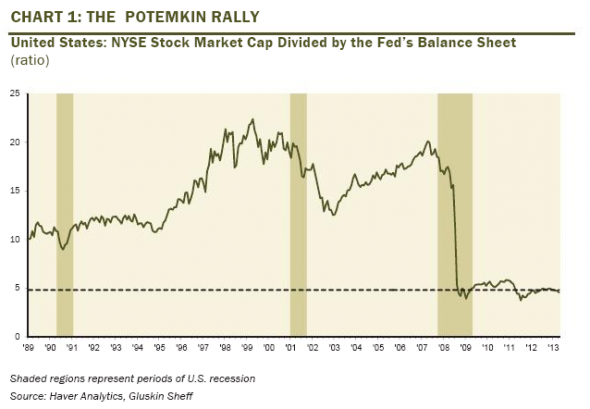 One of the most remarkable aspects of the rally in the S&P 500, apart from the fact that it has coincided with the worst economic recovery in US history, is its high correlation with the expansion of the Fed’s balance sheet.

This is something that former chief North American economist at Merrill Lynch David Rosenberg has been at pains to point out.

As you can see from the chart below from Canadian asset manager Gluskin Sheff, where Rosenberg is now chief economist, when adjusted for the Fed’s expansion since 2009 there has been no bull market.

Put another way, the US stock market has risen dollar for dollar over the last four years. In the absence of decent earnings growth (now in single digits) this poses an important question for long-term investors: What happens when the Fed starts to unwind QE and shrink its balance sheet?

If the correlation between stocks and Fed balance sheet expansion holds, we can expect significant downside ahead.

As Bill (Bonner) l  says, it’s summer. Trading volume is light. Most traders and investors are on vacation.

But come the fall there’ll be plenty of focus on the Fed’s exit strategy. First, we’ll have the Fed’s annual meeting at Jackson Hole. Then we’ll have news on the appointment of a new Fed chairman.

Expect volatility to pick up… as the focus shifts back to the relationship between stock prices and QE.

Your Only Advantage in the Markets

by Bill Bonner – Diary of a Rogue Economist

We spent most of last week on airplanes. From Paris to Amsterdam… then to Vancouver… then to Beijing… and finally back to Paris.

The best flight was Air Canada from Vancouver to Beijing. The plane was almost empty. We got on… put the seat back… and went to sleep.

A few times in the night we woke up… opened the window blind… and tried to figure out where we were. There was a red glow off to the right side of the plane, which we took to be the Arctic.

The air hostesses on the plane were all Chinese. Very pleasant and professional.

Remarkably, all the flights were on time.

But then, returning to terra firma, things started to go wrong.

We hadn’t much time to keep up with the markets last week. But nothing much happened anyway.

Analysts and commentators continued to bore and distract us with their explanations. Ultimately, nobody knows anything. Like Socrates, smart investors’ only advantage is knowing they don’t know anything.

A big storm ripped through France on Friday. Electric lines went down. This delayed trains to the southwest.

Then manmade problems took over. We sat on the train from Paris to Poitiers for an hour in the station while the SNCF tried to find a conductor. The one slated for the job had gone home when his shift was over. By the time we finally made it home, it had been a very long day.

Where is home? It is a big, old house in the country, southeast of Poitiers.

Twenty years ago, we decided to globalize our business and our family. We looked for a base in Europe. Mostly by accident, we found this pile nearly a four-hour drive from Paris. South of the Loire, but in a region where few tourists set foot, prices were low and the quality of life – as near as we could determine after only a couple of visits – seemed high.

Looking back, it was a rather impractical move. Whatever business we were to do in Europe, it wouldn’t be out in the French countryside. We would have done better to stay closer to the city. But nearer to Paris seemed less authentic, less “picturesque,” and it was more expensive.

We were amazed by how much house you could get for your money out here. The place cost us about the same thing as a nice beach house in Ocean City, Maryland. But it came with 11 bedrooms and what seemed like acres of roof – some in slate, some in clay tile.

In addition to the house, with its turrets, towers, gables and oeil-de-boeuf windows, there were barns, stables, several farmhouses, workshops, wine caves, garages and other buildings.

We thought all these things were a plus. Later, we learned that they were a big negative; the roofs had to be repaired at great expense. The house was a wreck too – with barely a single functioning bathroom and a kitchen that wouldn’t have been out of place in the Dark Ages.

There was also a large pond and a huge walled garden – an acre of space hidden behind a 10-foot-tall stone wall – which had been abandoned.

In 1995, it was to this setting that our American family arrived – two naïve parents and five baffled children. It has been our home in Europe ever since – serving as a summer house for the last 12 or so years. Now it is summer again, and we have taken up our summer quarters.

We got back Saturday night. On Sunday, Elizabeth rode a bicycle into the village to buy bread and croissants. We had our breakfast outside. Then we took a walk around to inspect the state of things. There were tree limbs down from the storm. One of them had knocked our gypsy wagon on its side. Otherwise, we saw no damage.

We bailed out the rowboat for a little tour of the pond and the orchard on the other side in the walled garden. A goose was trailed by five or six little goslings. A ragondin – a South American relative of the muskrat – slipped out of its hole and escaped under the bridge.

We rowed around the pond, checking on the status of plants and trees. Then we edged the boat up to shore on the walled garden side, near a small stone building where we keep garden tools. Stepping out of the boat, Elizabeth lost her footing and fell in the water.

“I know you find this amusing,” she said, dripping wet, “so go ahead and laugh.”

“No, I don’t find it the least bit amusing. I’m deeply distressed that you think I would.”

“Don’t worry. It would probably be unnatural not to find it funny when someone else falls in the water. Besides, we’re on our summer vacation. We can enjoy ourselves.”

Americans don’t typically go in for summer houses. They have suburban houses that are comfortable in all seasons and are meant to serve all year round. Prosperous families even have swimming pools behind their houses, giving their homes a holiday atmosphere in warm weather.

But a summer house is different. The idea is not just to decamp to a cooler place in the hot summer months, but also to leave your normal, workaday life behind. An ideal summer house has no TV. And no Internet. Maybe not even a telephone. It is a place to escape the news and let your mind and body recover.

We have friends in Scotland who have a summer house in the Shetland Islands.

“It’s paradise there, of a sort,” they report. “We’re on our own. We fish. The kids play in the tidal pools and turn purple because it is so cold. We go out in the boat and check on the sheep on a nearby island. We have a radio and a telephone, but nothing else.”

Here in France, people tend to head to the South:

“While you were away I visited friends down near Nimes,” Elizabeth reported.

“They have an old family house out in the country. It is what they call a mas. Very simple. With thick stone walls. A square building. The sun is hot down there. So they keep the shutters closed most of the time.

“But it was very restful. It is just a summer house. They use it only once a year. The rest of the year the furniture is covered with sheets. But the whole family goes there in July and August. They take off the sheets and open the shutters to air the place out. They come with a pile of books to read. They see their old family friends. They eat well. And that’s about it.”

The charm of a summer house is that you do not do there what you do in your regular house. You do not rush from one thing to another. You do not go shopping – except for food. You do not try to stay “in the loop.”

You do not try to catch up on your office work. You do not eat fast food. You do not drive fast cars. No. A summer house is a different thing. It is for slowing down… reading… thinking… wandering… wondering… talking.

But there is work to do too. Each year, we paint shutters. Or redecorate a room. Or repair a stone wall.

This year, we have to fix our gypsy wagon. Remarkably, the glass in the windows wasn’t cracked. But much of the trim on one side was broken. We got the wagon back upright with the help of our neighbor’s tractor. Now we have to put the trim back on.

But what’s the hurry?