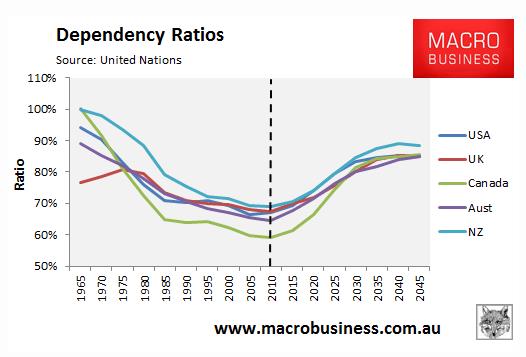 According to a recent study in the Financial Analysts Journal:

Favorable trends in the size and composition of populations have helped to fuel the rapid economic growth experienced in the developed world over the past 60 years, and their reversal plays a crucial part in the current rapid deceleration in developed world growth.

The problem, say authors Rob Arnott and Denis Chaves, is that these tailwinds are about to turn into headwinds. This will push growth rates into negative territory in 12 of the world’s biggest economies: the US, Canada, Australia, Britain, France, Germany, Italy, Japan, India, Russia, China, Brazil

The problem is aging populations…

More specifically, something called the “dependency ratio.” This measures the non-working age population compared with the working-age population.

Dependency ratios of the world’s major economies (both emerging and emerged) are spiking, as you can see from the chart below, which looks at the US, Britain, Canada, Australia and New Zealand. And as you can see from the chart below, the situation is worse in the other major developed markets, Japan, France, Germany and Italy. And here are the growth projections of the study, based on this big demographic shift. This is a major structural headwind facing the US economy. And the Fed is acting as though it didn’t exist. It is pumping stimulus to bring growth back to its “normal” 3-4% range. But “normal” ain’t coming back.

It was a fluke. A one-off. A happy coincidence.

Why Growth Must Fall

When you break it down, countries with older populations and lower fertility rates tend to grow slower than countries with expanding workforces and higher productivity rates.

This is why, for instance, Japan grew so swiftly in the 1960s-1980s… and why it started to slow in the 1990s, as legions of Japan’s boomer population hit retirement age and started to become a negative influence on GDP.

It’s also the major reason why we got a burst of growth from the 1980s onward. The fall of the Iron Curtain opened up massive new labor markets as well as consumer markets… and millions of new workers joined the labor forces of the world’s emerging markets. And in the US, the population grew from about 200 million at the end of the 1970s to about 300 million today.

These powerful demographic forces shape the world… and long-term asset prices. But as investors, we sometimes don’t see them. That’s because we are vulnerable to something called “recency bias.” We’re inclined to use our recent experience as our template for what will happen in the future.

When it comes to investing, this is a disaster. Because instead of thinking about the trends shaping the future, we extrapolate past trends out into the future. This is one of the biggest mistakes you can make as an investor, because markets are cyclical… and often follow a boom-bust pattern.

Stimulus has a powerful effect on US stock prices. We’ve seen a nearly 90% correlation between the rise in the S&P 500 and the expansion of the Fed’s balance sheet. But long term, fundamentals matter.

Combine these demographic headwinds with current valuations, and the major US indexes look overpriced. I am certainly not a buyer at today’s levels.