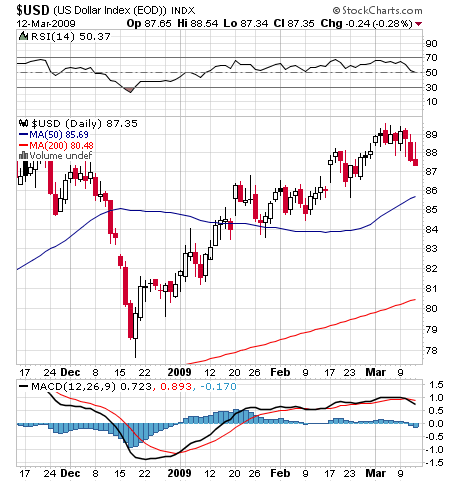 Friday’s news that the US economy added 321,000 nonfarm jobs in November sent the US dollar to new heights.

The US Dollar Index – which measures the exchange value of the dollar versus a basket of six trading-partner currencies – rose 1.2% for the week.

That leaves the index at its highest level since all the way back in April 2006 – close to the peak of the US credit bubble. Friday’s jobs report was the tenth in a row that saw the US economy add more than 200,000 jobs.

That leaves the official unemployment rate at 5.8% – or about half the European Union rate of 11.7%.

Some rate of unemployment is inevitable in an economy. Right now, the CBO reckons about 6 out of every 100 Americans looking for jobs will remain out of work for underlying structural reasons (i.e., reasons outside the Fed’s control).

That means the current 5.8% jobless rate is also close to the point at which wage pressure will start to build… and with it inflation pressures from rising wages.

This is already starting to happen. Hourly earnings rose 0.4% in November – nearly twice the rise Wall Street economists were expecting.

Wage growth is one of the indicators the Yellen Fed is watching closely. So this – plus a jobless rate butting up against the natural unemployment rate – will up the odds of a rate hike sometime in early 2015.

If rates rise, it will be bad news for bondholders.

Only by discounting the price can sellers of lower-coupon bonds compete.

Higher wage costs will also put pressure on US corporations’ profit margins, as they will have to use a bigger percentage of their revenues to pay for labor costs.

If profit margins start to fall, it’s a good bet that overvalued US stocks will follow suit.

We’ll continue to watch this story closely… But don’t be surprised if US stocks and bonds come under pressure in a world where the dollar is king.