Market Insight: Don’t Get Distracted by the Greek Sideshow 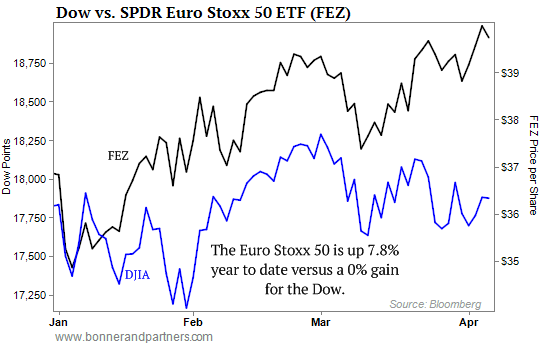 The headlines are filled with news of the visit by Greek prime minister Alexis Tsipras to Moscow today.

The Greek government has to find roughly €460 million ($500 million) to pay back a loan to the International Monetary Fund that comes due tomorrow.

It’s highly unlikely that Russian president Vladimir Putin will pony up the cash. Thanks to the big fall in oil prices and economic sanctions, Russia’s state coffers are hardly overflowing.

But Tsipras is keen to give the impression that, unless Brussels unblocks emergency funding earmarked for Greece, he’s happy to cozy up to Russia.

And the last thing other European leaders want is Russia meddling in their affairs.

As we’ve been telling paid-up Bonner & Partners subscribers in their three-times-weekly bonus letter, The B&P Briefing, Greece is a major distraction from the real story in Europe.

And that’s the outperformance of European blue-chip stocks versus their US counterparts.