Market Crash Warning: Everything Is Being Sold! 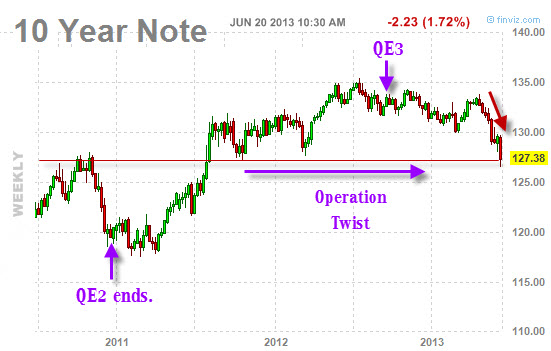 Global financial markets are now in a very perilous state, and there is a much higher than normal chance of a crash. Bernanke’s recent statement revealed just how large a role speculation had played in the prices of nearly everything, and now there is a mad dash for cash taking place all over the world.

After years of cramming liquidity into the markets, creating massive imbalances such as stock markets hitting new highs even as economic fundamentals deteriorated (Germany) or were lackluster (U.S.), junk bonds hitting all-time-record highs, and sovereign bond yields steadily falling even as the macro economics of various countries worsened markedly (Spain, Italy, Greece, and Portugal), all of this was steadily building up pressures that were going to be relieved someday. Just over a month ago, Japan lit the fuse by destabilizing its domestic market, which sent ripples throughout the world.

The Dash for Cash

The early stage of any liquidity crisis is a mad dash for cash, especially by all of the leveraged speculators. Anything that can be sold is sold. As I scan the various markets, all I can find is selling. Stocks, commodities, and equities are all being shed at a rapid pace, and that’s the first clue that we are not experiencing sector rotation or other artful portfolio-dodging designed to move out of one asset class into another (say, from equities into bonds).

Here’s the data. Let’s begin with the place that the most trouble potentially lurks – bonds – and here we have to start with the U.S. Treasury 10-year note, as that is the benchmark for so many other interest-rate-sensitive items, such as mortgage bonds.

Here there’s been a very interesting story that predates the recent Fed announcement by nearly two months. This chart of the price of 10-year Treasurys tells us much (remember, price and yield are exact opposites for bonds; as one moves up, the other moves down): That is, after all the hundreds and hundreds of billions of dollars of thin-air money-printing and bond-buying, Treasurys are now lower in price than when the Fed initiated Operation Twist and QE3.

And it’s not just 10-year rates; the entire yield curve from 5-year to 30-year debt is now higher than it was a month ago: This is very, very important. On the one hand, it tells us that the Fed may not be omnipotent after all, because you can bet your bottom dollar that the Fed simply does not want long rates to rise and that this was an unplanned and unwelcome move. On the other hand, rising rates will do much to a fragile economy and over-leveraged speculators and institutions.

I may need more hands here, because there are other undesirable effects of rising rates, including falling equities (we’ll get to that in a minute), fiscal difficulties for heavy borrowers (many sovereign entities belong to this club), and mortgages becoming increasingly expensive.

An early casualty of rising U.S. interest rates, of course, was mortgage rates, which have climbed approximately 40 basis points (0.40%) over the past month: Obviously, anything that will impact the housing market at this point is entirely unwelcome by the Fed, which has openly stated that it wants people buying homes – and for a variety of reasons, people tend to take out fewer mortgages when rates rise. This is especially true for refinancing mortgages, an important source of revenue for financial institutions.

If it were just U.S. rates that were rising, that would be one thing, but rates have been on the move in Europe and Japan. In this next table, you can see two things: (1) much of the one-month rise in rates can be attributed to the past 24 hours (red arrows), and (2) quite a number of the most problematic nations have bond yields that are below their recent highs (as seen in the green circle).

What I gather from this is that countries like Spain, Portugal, Greece, and Italy do not deserve the ridiculously low rates they now enjoy, and that those old highs in yield will be revisited.

Where the U.S. had a change in yield trend in mid-May 2013, Spain was leading the charge by reversing course in early May: Who was buying all that junky sovereign debt at inflated prices as Spanish yields fell? Institutions and speculators. The institutions were entities like Spanish banks and the Spain pension system, buying Spanish debt for reasons that seem far more political than financially prudent. For a while, that strategy worked, as rising bond prices delivered both nice yields and capital gains, but now pretty much anybody who bought those bonds in 2013 is (at best) roughly even for the year, leaving plenty who are nursing losses.

The speculators in this story represented the hottest of the hot money, involving hedge funds jumping on any trades that seemed to be headed in the right direction and/or offered useful yields for spread trades, both of which conditions were met by southern European sovereign debt. But that hot money is best described by the phrase easy come, easy go. It arrives fast and leaves even faster.

Okay, so what we can say at this point is that bonds are being sold off around the world. This is very bad for equities, because there’s a connection between falling yields and rising equities. As yields fall, the risk-appetite of investors climbs because they need returns, and so they put more money into equities and real estate. This is especially true when interest rates are negative, meaning that they yield less than the rate of inflation, and that is precisely what the Fed engineered. On purpose.

However, this coin has two sides, and the less virtuous face combines rising bond yields with falling equities. It is simply the reverse of the Fed’s desired and manufactured outcome of the prior several years.

If we look at the U.S. stock market, as typified by the S&P 500, we see that it peaked in May (to no one’s surprise, I hope) and has been steadily falling over the same period that interest rates have been rising. 1600 is now the magic ’round number’ for the market to break through if it is heading lower, which I think it is. We’ll also note that the 50-day moving average (the rising blue line) has been critical support for the S&P 500 throughout the entire advance (green circles), and that it has been soundly violated on this drop.

Commodities have been heading down, too, but seemingly as a part of a larger move that’s been underway for a couple of years: Note that commodities are now beneath their 200-week moving average, which is a very bearish indicator (green circle).

Collectively, the move away from commodities, bonds, and equities in all markets globally tells us that there’s nowhere to hide and that this is a 2008-style dash for cash. Everything is being sold, as it must, to meet margin calls, pay down leverage, and get out of positions; all are signs of the end of a speculative phase.

I know it’s a lot to claim that we are at that turning point, but the evidence that we are there is now more than a month old, and it’s time to consider that we are entering the next phase of our date with destiny.

In Part II: The Ride Down from Here, we look at the increasing number of flashing indicators warning that a 2008-style – but worse – sell-off is arriving. We say “worse” because this time it looks like it will be accompanied by a vicious cycle of rising interest rates. Plus, governments and central banks have used up all of their major options already. There are no more white knights to hope for.

We examine the likeliest course from here for asset prices and what to expect from the central planners as desperation increasingly drives the decision-making. We also look at what defensive steps individual investors should be considering. Because, as we’ve been advising for months, now is a time for safety.

Buckle up. It’s going to be a bumpy summer.

Executive summary: Father of three young children; author; obsessive financial observer; trained as a scientist; experienced in business; has made profound changes in his lifestyle because of what he sees coming.

First of all, I am not an economist. I am trained as a scientist, having completed both a PhD and a post-doctoral program at Duke University, where I specialized in neurotoxicology. I tell you this because my extensive training as a scientist informs and guides how I think. I gather data, I develop hypotheses, and I continually seek to accept or reject my hypotheses based on the evidence at hand. I let the data tell me the story.

It is also important for you to know that I entered the profession of science with the intention of teaching at the college level. I love teaching, and I especially enjoy the challenge of explaining difficult or complicated subjects to people with limited or no background in those subjects. Over the years I’ve gotten pretty good at it.

Once I figured out that most of the (so-called) better colleges place “effective teacher” pretty much near the bottom of their list of characteristics that factor into tenure review, I switched gears, obtained an MBA from Cornell (in Finance), and spent the next ten years working my way through positions in both corporate finance and strategic consulting. From these experiences I gather my comfort with numbers and finance.