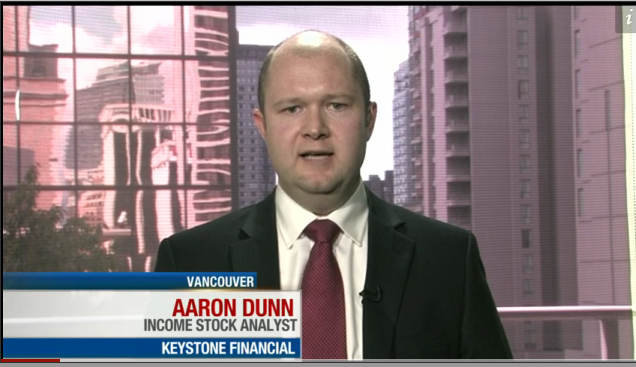 Please Note: KeyStone’s Senior Income/Dividend Stock Analyst, Aaron Dunn appeared on BNN today. Click on the image or HERE to view the interview or see below. This Friday, mining and energy stocks led the way to a lower session on the Toronto stock market as demand concerns dented commodity prices. The S&P/TSX composite index fell 96.14 points to 12,650.42.

Statistics Canada reported that Canada’s economy rebounded strongly from a half-year of sub-par growth, posting an above-consensus 2.5% advance in the first three months of the year and setting the country on a stronger recovery path.

The report from Statistics Canada also revised the economy’s speed from 0.6 to 0.9% for the fourth quarter of 2012, and from 0.7 to 0.8% in the third quarter of last year. The first quarter was the best three-month gross domestic product performance since 2011, and the 0.2 per cent month-to-month advance for March — the last month of the quarter — provided a solid launch to the rest of the year.

Pundits were also not so quick to give Canada’s economy the thumbs up however, pointing out that much of the growth was based on an exceptionally strong exports performance, and in particular from natural resources. With declining commodity prices, the pace of gains in both total exports and output in the mining, oil and gas extraction sector are both not likely to be sustained.

Canada’s economy is in a difficult transition period, from one supported by a strong housing sector and consumer spending, to one that must rely on exports and business investment.

As such, it will remain a stock pickers market. With the S&P TSX trading at a 3 year average high of 19.1 times earnings, broader Canadian equities should not be considered cheap. We are keeping a keen eye on certain segments of the economy for near, mid and long-term growth opportunities as we believe only pockets of the Canadian economy are positioned for growth.

As such, index buying (or passive Canadian ETFs) in Canada in the near to mid-term does not appear overly attractive. Generally, the S&P/TSX Composite is flawed for index-tracking — it’s overweight in resource and financial stocks and leaves Canadian far too dependent on these sectors for investment returns.

One “pocket of strength” we have already benefitted from this year and expect to continue to see strong long-term potential in is infrastructure investment both made and planned for Northeastern BC and Northwestern Alberta. The most notable regions in these areas include the Horn River, Montney, and Peach River Arch areas, which are three of the fastest growing liquid rich natural gas basins in North America.

Active in these areas are some of the country’s largest energy infrastructure and production companies, including, Enbridge, TransCanada, AltaGas, Pembina Pipelines, Cenovus, Spectra, Nexen, Encana, and Penn West. With the recent exception of Nexen, all of these companies are publicly-traded and report both historic and planned capital investments.

The three major pipeline projects planned for the area include Enbridge’s $6.0 billion Northern Gateway Pipeline, TransCanada’s $5.0 billion Prince Rupert Gas Transmission line (expected to be in service 2018) and TransCanada’s $4.0 billion Coastal GasLink (expected to be in service by the end of the decade). Although the Northern Gateway pipeline has been highly contentious, we believe that TransCanada’s projects have a far higher likelihood of approval considering that gas infrastructure projects have not received the same public scrutiny as Oil Sands related projects.

This past week our March 2013 Top Focus BUY from this sector, jumped another 20% and has now generated our clients a return of almost 70% in only 2 months. Despite the rise, we just reiterated our BUY recommendation after they released outstanding Q1 2013 financial results. Not only does this stock trade at around 5 times earnings, but it remains well positioned to continue to benefit and grow from the resource and infrastructure development expected to occur in Northern BC over the next 5 years.

To find out more about this exciting company and several others, go to our website www.keystocks.com  and become a client of KeyStone’s small-cap and dividend growth stock research.

We are currently evaluating another relatively cheap energy infrastructure service stock with exposure to this region which may be our next Top Focus BUY.