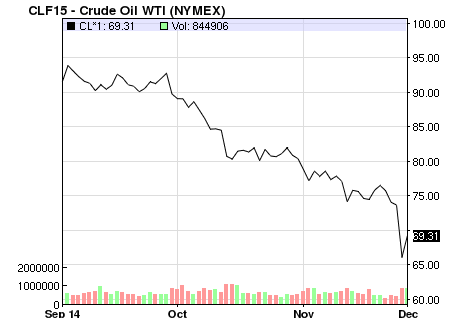 The gyrations of financial markets can be startling. I am reminded of the following words of wisdom attributed to the economist John Maynard Keynes:

“The market can remain irrational longer than you can remain solvent.”

The words of wisdom reportedly were born in the 1920s after Keynes unsuccessfully performed a series of highly leveraged trades (short-term currency trading on high margin), the result of which was a humbling by the market. In this case, humbling is apparently another world for “wipe out.”

In the past number of weeks, these startling gyrations have been none more apparent than in the price of oil and energy related stocks. Since September, West Texas Intermediate has lost close to 30%. Given its pervasiveness in the global economy, it is shocking repricing could have far reaching implication, particularly for energy dependant economies such as Canada.

Those implications, of course, are largely dependent on the drop continuing and perhaps more importantly persisting at low relative levels (current range or lower). In this case, lower oil likely supports a continued lower Canadian dollar, weaker government revenues, slower growth in Western Canada (particularly Alberta), and generally lower stock prices for Canadian companies associated with oil. If OPEC continues or increases production for an extended period, in an effort to stick it to its Middle East rivals — curtailing North American shale oil growth as a collateral benefit — then prices are likely to stay relatively low until the corrective measure of lower production that low prices produces kicks in. This would likely be relatively painful for the North American oil sector and dire for those companies heavily levered with high costs of production.

If oil snaps back and trades in the US$80 range of higher, then the sell-off has already been overdone. The truth is likely in between the two scenarios.

So should investors be mortgaging the house and jumping back into anything oil related. The answer is no. Like Keynes said, “the market can remain irrational longer than you can remain solvent.” For those that would point out that the market is acting rationally with the current oil pricing environment, we would point out it had then acted relatively irrationally for the past 3-years pricing crude above US$90 a barrel (well above US$100 for a good deal of the time). Either way, the market can stay irrational in the near term, crushing those that speculate (even rationally) on margin.

As an investor, with a long-term horizon, you should always be alert to potential opportunities, but there is no hurry to be overexposed to oil at present. In fact, if you have not already, paring down exposure to crude is an option – we find Canadian investors are often over exposed to commodities in general.

We think there is likely to be some very select opportunities in the upcoming tax-loss selling season which typically peaks sometime in mid-December. Investors looking to find value with an eye to where these companies will be 1-3 years from now might find some babies are thrown out with the bathwater at that time. Remember to concentrate on companies with strong balance sheets (high net cash positions) that have historically produced strong profits and high return on equity.

KeyStone has two Special Reports slated for upcoming release – our 2015 Cash Rich Profitable Small-Cap Report and a Special 2015 Opportunities Report. Both will take a look at potential long-term winning investments that have been “thrown out with the proverbial bath water” in tax loss selling. We kicked off our 2015 Cash Rich Coverage with a preview Initial Coverage Report this past week on an underfollowed Canadian tech stock with 33% of its market capitalization in cash, zero debt and growth on the horizon.

Glentel Proves to be a Big Long-Term Winner

To further pick up on our Keynes theme, we take a quick look at BC-based Glentel Inc. (GLN:TSX). This is a stock that has been on our Focus BUY list since September 2006 when its shares traded in the $2.93 range and we have recommended it a number of times under the $9.00 range over that past number of years in our research. KeyStone most recently re-issued a BUY on the stock in July of 2013 at $17.76.

Despite continuing to be a free cash flow generating machine, the markets sold off the stock due to an unprofitable expansion into the Aussie market and a slowing of overall growth. The stock suffered this past year briefly trading under $10 once again, as investors lost patience. A number of times our clients questioned whether they should sell the stock given the poor recent share price performance. While we recognized the missteps in Australia, the cash generation in North America remained strong and the valued was still there. As such, we maintained our HOLD on the stock as the markets, in the near-term remained irrational.

This past Friday, we were happy to report our patience and belief that the intrinsic value of Glentel would eventually be recognized paid off. BCE Inc. (BCE:TSX) announced it would acquire all of the issued and outstanding shares of Glentel for $26.50 per share in a combination of cash and BCE shares, sending Glentel’s shares soaring. The transaction represents a premium of 121% based on the 10-day volume weighted trading average share price of Glentel on the TSX.

Essentially, the markets irrational near-term negativity had Glentels’ stock trading over 100% lower than the value at which a large investor was willing to buy it at.

Indeed, the market can stay irrational for a long time, but we believe if you are patient and unlevered, value is eventually rewarded.