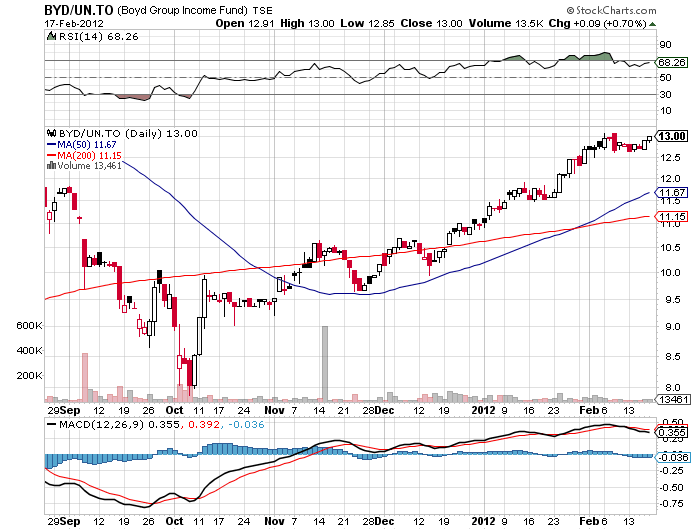 2011 proved to be another very tumultuous year for both the Canadian and global markets in general. But, in the wake of the 2008 credit crisis that froze capital, seriously eroded confidence in financial institutions and the ability of our leaders to act effectively is nothing new.

With Western economies awash in debt, both public and private, the great deleveraging has just begun. Volatility is here to stay in equity markets – so get used to it.

Fortunately, over the course of 2011, a number of strong themes began to emerge and gained momentum into 2012. The first being a return to dividend paying stocks. The excesses of the preceding two decades led to the pursuit of growth as a panacea of stock valuation. The promise of future growth was intoxicating for investors and the multiples applied to the growth element of a company far exceeded any premium put on a company that thought it appropriate to actually “return capital” to their investors.

In fact, there have been several periods over the past 20 years when a company was actually given a lower multiple after instituting a dividend policy as analysts then perceived the company was signaling to the markets that the company had no better use for its capital. As such, there was little growth potential left in the company and it was now a “stodgy old dividend payer.”

But this has changed. The reasons are varied and include a low rate environment, which makes dividends or distributions very attractive; distrust of management’s stewardship of capital and a need to see “cash in hand” to keep cash generation a focus; a lack of growth opportunities as the global economy grinds lower; and for Canadians specifically, a lack of alternative income generating vehicles following what was essentially the end of the business trust segment.

Our Income Stock Research performed incredibly well in 2012. What was more a surprise was that the trend did not end at with traditional cash cows such as utilities, telco’s, and pipelines etc. Within our Small-Cap research, growth companies who managed their cash flows effectively enough to paid decent dividends also produced strong returns in 2011. Included in this list are familiar names such as Enghouse Systems Limited (TSX: ESL) (initial IWB positions established in the $8.00-$9.00 range), MOSAID Corporation (TSX: MSD), and Boyd Group Income Fund (TSX: BYD.UN) (initial IWB positions established in the $5.55 range), which each saw their shares rise over 50% (in the case of the latter two, over 100%).

Today, an announcement of a dividend policy or the upping of a dividend is again met with cheers from the market and we often see immediate gains – and rightfully so. What greater confidence can a management team show you as an investor than that the underlying business is generating more cash that can be paid back to you.

While growth is an essential element in our small-cap research, we have always found it prudent to invest in a basket of what we call “dividend growth stocks” and will continue to emphasize this, although not exclusively, in 2012. In the universe of investing, companies that are able to grow their dividends add an interesting dynamic to a portfolio. A growing dividend means that the income yield on the original investment also continues to grow over time.

Be it in growth names or traditional cash cows, the demand for a return of capital continues to grow and we see no end to it in 2012.