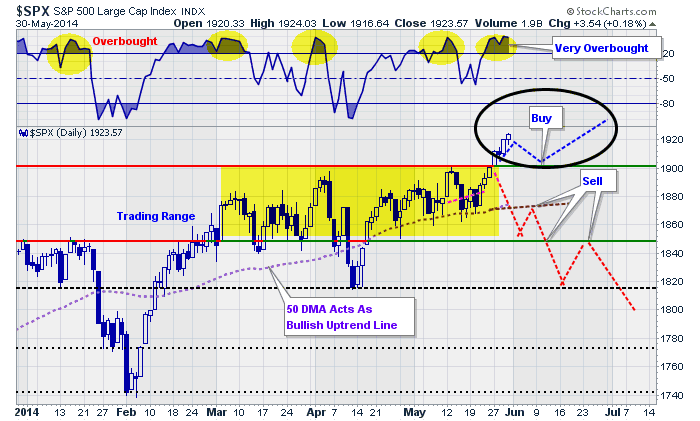 Over the last couple of months, I have been running a consistent analysis of the market consolidation that began in early February. During the last two weeks in particular, I began discussing two possibilities which included a market breakout or another market failure. This week, the market did the former by breaking out of the consolidation and continuing its current bull market cycle. Two other things have also occurred in the past week coincident with the breakout. The “good news” is that an“initial buy” signal has finally been triggered after the “sell signal” was issued in early January.

We choose to remain allocated in our models due to the fact that despite the “sell signal” being in place the markets had technically done nothing wrong. However, even if you did observe the “sell signal” and raise cash it did little harm and certainly would have reduced the emotional “seesaw” that occurred thereafter.

This is an important point. The “buy” and “sell” indicators really aren’t so much designed to capture every percentage point advance in the market. Nor are they designed to keep you from losing money. The real value of the signals is to reduce portfolio volatility to a point to where you don’t make emotional mistakes. Acting emotionally rarely works out well in the markets, or in life. This is why I focus so heavily on price movement to dictate portfolio actions. I am a believer that we must invest for the long term; however, I also understand that not managing short-term risks can have detrimental consequences.

The chart below shows a longer term picture of the market. This is where the “bad news” is contained. If you look at the bottom part of the chart, you will see a short term MACD which acts as the initial “buy/sell” indicator. While it has turned positive, it has done so in a declining trend. I have drawn red lines over the previous periods where the same set up has occurred.

The declining trend of the indicator is a “divergence” from market price action. Such divergences are typically associated with near term market tops both large and small. But this isn’t the only such divergence that are concerning at the present time.

The next chart shows the “volume” of the market relative to the recent advance.

The decline in volume is very suggestive of a rally that is unlikely to be maintained in the short term. This analysis is also confirmed by another divergence in the “participation” of the overall market as shown by the number of stocks on “bullish buy signals.” The same is true with the net number of stocks making new highs.

All of these signs are suggestive of a very tired market.

These divergences tied together with extremely high levels of bullish exuberance and complacency make for a perfect breeding ground for a rather nasty market correction. (These charts are extracted from “Signs Of An Aging Bull Market” if you want to see the rest.) The point here is simple. The “breakout” of the markets this past week confirms the continuation of the recent bull trend. Therefore, our portfolio allocation model remains unchanged at current levels (fully allocated) for the time being.

However, the internal deterioration of the markets does suggest that “risk” of a correction is rising. This is particularly the case as the Federal Reserve continues to extract liquidity support from the markets. (The recent release of the Federal Reserves Permanent Open Market Operation schedule confirms only $25 billion in purchases in June with NO buys on Fridays.)

Lastly, the breakout of the markets above 1900 this past week, at a time when the Fed is extracting liquidity, is also something that we saw in 2011. Therefore, it is important that you remain keenly aware of the internal weightings of your portfolio and overall allocation model.