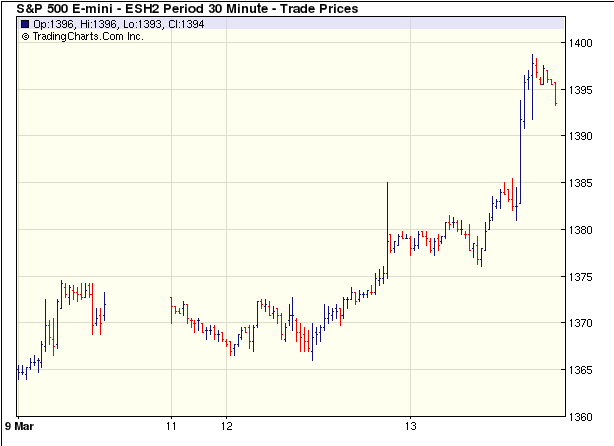 STOCK MARKET SUMMARY upated after today’s close +  a Gold Comment immediately below saying…. “one of the best gold market timers around, is Mark Leibovit”

Mark Says “Time is running out for the current (stock rally), but the intermediate trend for 2012 is still bullish”

Well folks, in a normal market this would smell like a top. Markets explode higher yet again after a prolonged run – and all the news is GREAT! Retail sales strong, key banks pass stress tests (did anyone expect otherwise?), unemployment is down, 200,000 new jobs were created last nonth, Europe’s problems are on their way to being solved, etc. It seems the ‘wall of worry’ that the market has been climbing is being dismantled brick by brick.

While this latest rally looks suspect from a contrarian standpoint, we must wait for price and volume to confirm any reversals that may develop. Until then, the trend is higher.

Equities opened strong and finished stronger as news of the bank stress tests were released two days early after the Fed announced no change in interest rates with inflation not being a major threat.

Financials exploded higher as the release of the bank stress tests removed an element of uncertainty and forced shorts to cover positions. Also news that JP Morgan Chase is increasing their dividend and initiating a $15 billion stock buyback program brought in a rush of buyers late in the session. JPM closed 7.03% higher at 43.39.

The FOMC opted to leave its fed funds target rate at 0.00% to 0.25%. The statement said that economic conditions, including low rates of resource utilization and a subdued outlook for inflation, are likely to warrant exceptionally low levels for the fed funds rate at least through late 2014.

Shares of Urban Outfitters Inc fell 5.3 percent to $27.95 after the company said it expects margins to continue to be pressured.

The Fed didn’t signal any change in its plan to keep interest rates low which stoked optimism about the economy. That in turn put upward pressure on oil and copper prices, which impacted energy and base-metal mining shares.

Mining stocks were strong, led by gains in Teck Resources as its shares gained nearly 3 percent to C$36.53 while First Quantum advanced 3.3 percent to C$21.13.

Copper posted strong gains on the great news throughout the session as the May contract settled .0650 higher at 3.9025.

Don’t get suckered! There are times when gold can turn into fool’s gold. This could be one of those times. In other words, gold stands out as an exciting investment for the long run, but looms as a potential dog of an investment for the short run.

Those essentially are the cautionary suggestions from a couple of outspoken and generally buoyant long-time gold bulls. More specifically, they’re saying if you’re tempted to take a flier on the precious metal in the hopes of buying it on the cheap after its wicked $130-an-ounce decline over five days that sent it skidding to around $1,660, your timing could be for the birds.

Their basic view is that the recent thunderstorms in the gold market-largely a reflection of a hint from Federal Reserve chairman Ben Bernanke that further quantitative easing might not be in the cards, Greek debt fears and a firming of the greenback-may be far from over. The inference is clear, namely gold could head down again before it heads up.

Our other wary long-term gold bull, one of the best gold market timers around, is Mark Leibovit, editor of the Arizona-based Leibovit VR Gold Letter. His view: gold shares are weakening and we need a confirmation of a bottom before jumping back in. “I would step aside till the dust settles,” he says. Another current negative, he notes, is the seasonal factor, a reference to the fact that gold often tops out in February or March, remains stagnant for about 90 to 120 days and then resumes its advance in the late summer.

For the longer term, though, Leibovit, who sees a full-scale confrontation between Israel and Iran before the end of May, says gold remains on a buy signal, but he emphasizes he would only buy the volatile metal here on weakness and cautions “it’s definitely not for the faint of heart.”

Before year end, though, he sees a gold reversal, with the metal, reflecting all the well known positive fundamentals, in particular global round-the-clock money printing, climbing to $2,000 or more. Among his favorite gold plays are Canadian Mapleleaf coins, Central Fund of Canada and a Canadian exchange-traded fund backed by the Royal Canadian Mint, an ETF that trades on the Toronto Stock Exchange under the symbol MNT and enables its investors to take delivery of their physical assets.

STOCKS – ACTION ALERT – SELL (Time is running out for the current rally, but the intermediate trend for 2012 is still bullish)

Today is both ‘Turnaround Tuesday’ and FOMC day likely triggering a rally following a down day on Monday. I have unfulfilled upside targets in the S&P 500 between 1395 and 1445, but felt a shakeout back to first 1323 and possibly 1270 were doable this Spring. We may still rally into the end of the month or early April and I could be early in my SELL signal. One of the key indexes to watch is the Russell 2000 which displayed several short-term sell signals in my work in February ahead of the early March sell-off. It is now rebounding and a breakout above 833.02 (the February 6 high) especially on volume would likely be coincident with new rally highs elsewhere. We are also watching the key Dow Transports which also topped out in early February at 5384.15, now 5144.28. New market highs, however, does not negate the chances of still seeing a sharp correction in the Spring, but this time coming from higher ground rather than current levels. The Dow Daily below:

THE RENEWAL OF YOUR SUBSCRIPTION IS AUTOMATIC. YOUR CREDIT CARD WILL CONTINUE TO BE BILLED UNLESS YOU NOTIFY VRtrader.com SEVEN DAYS PRIOR TO SUBSCRIPTION EXPIRATION EITHER VIA EMAIL POSTING THE WORD ‘UNSUBSCRIBE’ IN THE SUBJECT BOX OR TELEPHONE US AT (928) 282-1275 OF CANCELLATION. NO REFUNDS ARE AVAILABLE ON SILVER, PLATINUM OR VR FORECASTER (ANNUAL FORECAST MODEL) SUBSCRIPTIONS.

Welcome and congratulations on choosing VRTrader.com as a source for your stock market commentary, information and analysis for the U.S. Stock Market. Needless to say we are very happy that you are joining us for AT LEAST the next 30 days days and look forward to providing you rewarding and inciteful information that will help you toward your goal of succeeding in the markets.

There are no refunds or pro-rata refunds offered at VRTrader.com for any subscription. You are being offered a 50% discount for trying our service for the first 30 days only!