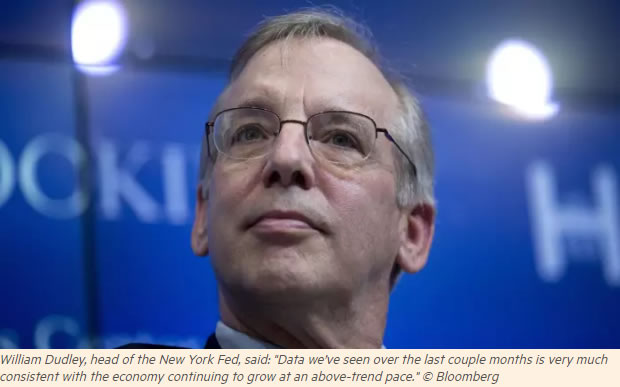 Rate hike odds surged as high as 80% following comments today from two Fed presidents. The odds are 62% as I am typing now. Let’s investigate the spike. The market odds of a March increase in US interest rates shot up to 80 percent on Tuesday as Federal Reserve policymakers insisted they did not need to see Republican tax reforms and other policies before they act.

William Dudley, influential head of the New York Federal Reserve, said that the prospects for adding to the December 2016 rate increase had become “a lot more compelling”.

“It seems to me that most of the data we’ve seen over the last couple months is very much consistent with the economy continuing to grow at an above-trend pace, job gains remain pretty sturdy, inflation has actually drifted up a little bit as energy prices have increased,” he said in an interview with CNN.

Mr. Dudley is typically considered to be a dove on the Fed’s policy-setting board, so his remarks were “significant”, according to Thomas Simons, a money market economist at Jefferies, the investment bank.

“For Dudley, this is as hawkish and specific as you’re going to get,” he said

John Williams, president of the San Francisco Fed, said on Tuesday that a move would be “very much on the table for serious consideration” in March.

Parking the question of higher rates until June, on the other hand, would mean another half-year will have passed since the last rate rise in spite of surprisingly strong economic data.

I have no idea what “surprisingly strong” economic data they are referring to given that 4th quarter GDP is 1.9%, and the Atlanta Fed GDPNow model suggests 2.5% for first quarter.

Yields jumped across the board, but rates on the short end rose more than the 30-year long bond.

If the Fed hikes, and I am not convinced they will, we will quickly learn more about the surprisingly strong economy.