Marc Faber: Why Industrial Commodities Will Continue To Fail 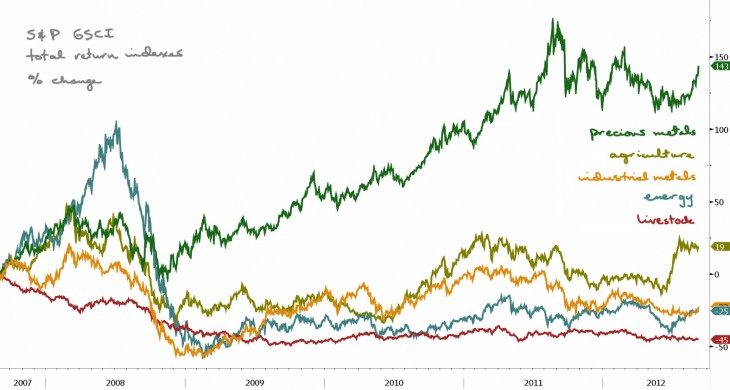 Jared Cummans: Marc Faber, who shares the moniker “Dr. Doom” with Nouriel Roubini, has made a name for himself not only from his intelligence, but also from his outspoken and often controversial views. Faber has recently predicted a 100% chance of a U.S. economic recession and says that he is simply waiting for things to fail. To put things lightly, he is something of a bear, as he often points out the faults of the economy or singles out failing sectors. It seems as though he has done it again, but this time with industrial commodities, namely industrial metals [for more industrial metals news and analysis subscribe to our free newsletter].

Commodities like copper, steel, aluminum, and others have struggled as of late given the shaky economic indicators from around the world. Faber notes that“industrial commodities will remain under pressure due to the fact that the Chinese economy is slowing down considerably”. While it is important to realize that the Chinese are intentionally subduing some of their growth; it has been a rising issue for investors around the world for some time now. China’s GDP growth has been dropping for nearly two years, worrying many that this dominant emerging market is beginning to slow down.

Of course, slowing down still holds a growth rate of more than 7.6%, a figure that looks quite robust when set next to the U.S. growth rate of just 2.3%. But the shrinking figure is still worrisome, as China is the one of the world’s largest consumers and producers of industrial metals like copper among others. If China were to cut its demand prospects from something like copper or steel, it could have devastating impacts on the commodities themselves, according to Faber’s theory. Below, we outline several options to make a play on Faber’s prediction [see also Why Bill Gross Thinks The Fed is Ruining The Economy].

CommodityHQ offers educational content, analysis, and commentary on global commodity markets. Whether you’re looking to speculate on a short-term jump in crude or establish a long-term allocation to natural resources, CommodityHQ has the information you need.