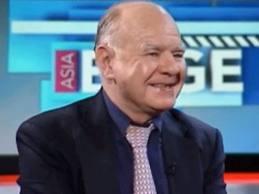 Faber on the eurozone crisis:

‘I think that combined with seasonal strength in July, the rally has carried on somewhat. But it is another cosmetic fix, a quick fix that does not solve the long-term fundamental problem of over investment in the euro zone. And what it does, basically, it forces Germans to continue to finance people in Spain and Portugal and Greece that are living beyond their means.’

‘If I were the Germans, if I were running Germany, I would have abandoned the eurozone last week…It is a costly decision, but losses are there and somewhere, somehow, the losses have to be taken. The first loss is the banks. In the case of Greece, one should have kicked out Greece three years ago. It would have been much cheaper.’

On whether he’s picking up European equities:

‘Yes. In Portugal, Spain, Italy, and France, the markets are either at the lows of March 2009, or lower. Along with bad companies and the banks, there are also reasonably good companies. Stellar companies, but they have been dragged down. I see value in equities, regardless of whether the eurozone stays or is abandoned.

‘[I’m buying] anything that has a high yield, or what I perceive to have a relatively safe dividend. In other words, I do not expect the dividends to be slashed by 90%…I am not buying banks, but maybe they could rally. I am just not buying them because I think there will be a lot of equity dilution and recapitalization. I’m not that keen on banks.’

….read more about what currencies he is recommending go HERE or view the entire video below