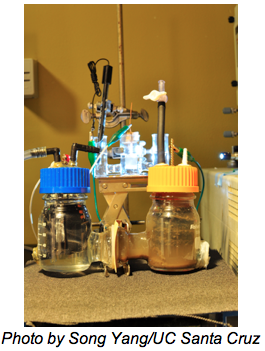 There should be no surprise that landfills are being drilled to install pipes to collect methane (natural gas) from the decay of trash. And it should come as no surprise that a similar collection process is occurring in municipal wastewater treatment plants by placing domes over aeration tanks to capture methane produced by anaerobic bacteria that help consume the waste. But methane is laden with carbon. It’s not as bad as gasoline, but it still adds a lot of carbon dioxide to the atmosphere.

Now comes a clever professor at the University of California’s Santa Cruz campus, and his group of affable graduate students, to design and build a machine that converts human waste directly into cheap clean energy — something that’s close to the chemical version of a perpetual motion machine. The device is a unique and nanotechnology-tweaked combination of two unusual fuel cells that have never been combined before. One is called a microbial fuel cell (MFC). That’s most of what you see in the photo above. It’s a two-chambered device (thus the two bottles) with a cathode and an anode and a cation exchange membrane in between.

The left side of the cell is filled with water and the right side with sewage. It turns out that wastewater contains special bugs — called electrogenic bacteria — that eat hydrocarbons and carbohydrates in the sewage and produce excess electrons in the process.

“Wastewater has a complex community of bacteria. Only one or two produce electrons,” says Yat Li, associate professor of chemistry at the Santa Cruz campus. “When they produce these electrons, they need to get rid of them. We help them do that.” The resulting MFC he and his graduate students designed is essentially a wet battery.

Behind the microbial fuel cell in the photo above is a photoelectrochemical cell (PEC) filled with water that sucks up the electricity from the MFC and off-gasses hydrogen by passing a current through the water, a process known as electrolysis.

And that’s the trick of it.

Electrolysis is a great way to produce carbon-free hydrogen for fuel. When you burn hydrogen in a stove or auto engine, for example, the only byproduct is water vapor — no carbon dioxide. But electrolysis takes a hefty input of electricity, so making hydrogen that way is normally expensive and inefficient.

“Our approach is to use sunlight to power the process,” as well as those electron-making bacteria in the MFC, says Li. His PEC creates electricity by using nanotechnologies to make large-surface-area electrodes that are photo-reactive. “You could call it artificial photosynthesis.”

The process is incredibly synergistic because both a microbial fuel cell and a photoelectrochemical cell normally need a jump-start of electricity to begin working. But in Li’s machine, both the MFC and the PEC can jump-start each other. Both can work as a battery for the other. And both are capable of producing hydrogen gas. It’s kind of like a “push me-pull you” of energy.

Next, Li and his crew, working with Lawrence Livermore National Laboratory — and its wastewater — will scale up this 100 ml lab project to a 40-liter bottle. “One of the questions we have to address is whether this scales up linearly,” Li says. “Do we have to change the electrodes or the membrane? The surface area of the electrodes, which we can magnify with nanotechnologies, is very important to making this scale up.”

Entrepreneurs and venture capitalists take note: The technology is certain to get the attention of a number of companies trying to get cheap fuel from landfills and wastewater, but so far the process is not licensed.

We will be watching for those developments.

In the meantime, to see a delightful video from Dr. Li about how an MFC works, simply click on this link.

Note: As 2013 winds down, you’re going to be bombarded by all manner of “what to look for in 2014” predictions. Allow us to simplify things for you…

We predict: “The End of Everything”

Over the next 10 years, 7 key moments could change everything you know about your health, wealth and prosperity.

Don’t miss your chance to discover these 7 mega-events for yourself.

Watch this short video for all the details.

Thank you for reading Tomorrow in Review. We greatly value your questions and comments. Click here to send us feedback.