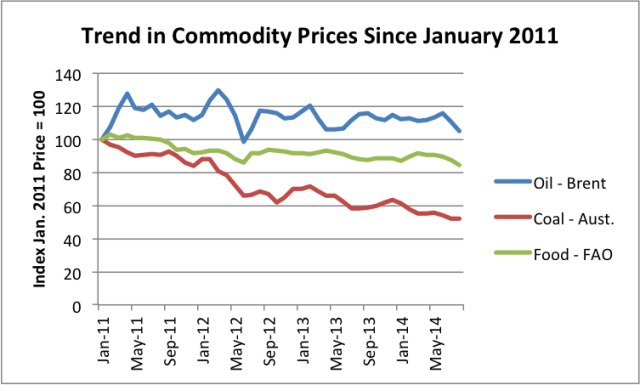 Could Low Oil Prices Point To A Debt Bubble Collapse?

Oil and other commodity prices have recently been dropping. Is this good news, or bad? I would argue that falling commodity prices are bad news. It likely means that the debt bubble which has been holding up the world economy for a very long–since World War II, at least–is failing to expand sufficiently. If the debt bubble collapses, we will be in huge difficulty.

Many people have the impression that falling oil prices mean that the cost of production is falling, and thus that the feared “peak oil” is far in the distance. This is not the correct interpretation, especially when many types of commodities are decreasing in price at the same time. When prices are set in a world market, the big issue is affordability. Even if food, oil and coal are close to necessities, consumers can’t pay more than they can afford.

A person can tell from Figure 1 that since the first part of 2011, the prices of Brent oil, Australian coal, and food have been trending downward. This drop in prices continues into September. For example, as I write this, Brent oil price is $97.70, while the average price for the latest month shown (August) is $105.27. It is this steeper, recent drop, which many are concerned about.

We are dealing with several confusing issues. Let me try to explain some of them.

Issue #1: Over the short term, commodity prices don’t reflect the cost of extraction; they reflect what buyers can afford…..continue reading this thorough analysis with 8 more fascinating charts HERE