Look Out: We can’t expect China to be the engine of global growth 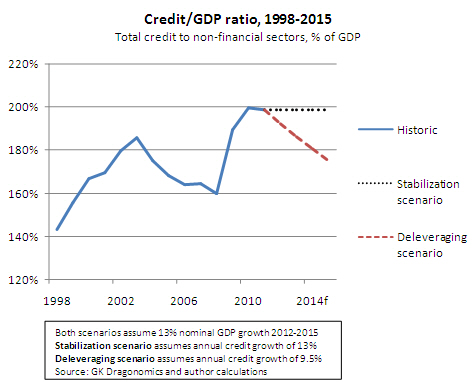 CHINA REBALANCING: IS IT AN OXYMORON?

“The department [China’s Organization Department] is plagued by constant tension that bedevils most political systems. The Politburo has striven to professionalize the selection of top officials through the department, while undermining the process at the same time by fixing appointments in favor of loyalist and relatives. Powerful officials presiding over local fiefdoms have swept aside the rules even more crudely, establishing marketplaces in which government positions are bought and sold for huge financial gain.”

I got a bit of a chuckle out of IMF Chief Christine Lagarde. She recently praised China for its “rebalancing efforts.”  What a pain it must be to have to lie publicly on a regular basis in an effort to keep the key players agreeable so you can attempt to conduct coordinated global policy.

There is a big gap between Ms. Lagarde’s public PR and reality when it comes to China’s “rebalancing.”  This if from Professor Michael Pettis’ latest missive [my emphasis]:

China is not rebalancing and the decline in the surplus was driven wholly by external conditions.  In fact until 2010, and probably also in 2011, the imbalances have gotten worse, not better.

For proof consider China’s total savings rate as a share of GDP relative to China’s total investment rate.  The current account surplus, of course, is equal to the excess of savings over investment – any excess savings must be exported, and by definition the current account surplus is exactly equal to the capital account deficit.  This is the standard accounting identity to which I have referred many times in my newsletters.

The savings and investment numbers show that the last time investment exceeded savings was in 1993-94, and during that time China of course ran a current account deficit.  This was just before Beijing sharply devalued the RMB, after which it immediately began running a surplus, which has persisted for 17 years.  Since 2007 savings have climbed from 50% of GDP to nearly 53% in 2010. During this time investment has climbed from just over 40% of GDP to nearly 49%.  The difference between the two has declined from just over 10% of GDP to just under 4%, and this of course is just another way to say that China’s current account surplus has dropped from just over 10% of GDP to just under 4%.

According to Dr. Pettis:

Guess what Ms. Largarde?  China’s savings rate is increasing, not declining.  This is the opposite of rebalancing.

But many analysts point to the fact that China is pursuing policies to stimulate consumption.  Oh really?  Back to Dr. Pettis:

Beijing is trying to increase the consumption share of GDP by subsidizing certain types of household consumption (white goods, cars), but since the subsidies are paid for indirectly by the household sector, the net effect is to take away with one hand what it offers with the other.  This is no way to increase consumption.

Meanwhile investment continues to grow and, with it, debt continues to grow, and since the only way to manage all this debt is to continue repressing interest rates at the expense of household depositors, households have to increase their savings rates to make up the difference.  So national savings continue to rise.

So why is the current account surplus declining if China’s consumption isn’t taking its place?  Investment continues to increase.  State Owned Industries (SOEs) still enjoy access to cheap credit (this is an effective subsidy by the household sector, i.e. transfer of wealth due to below-market interest rates on deposits; same thing happening in the US in order to subsidize the banking system).  But because SOEs have increased capacity so much in key industries, and profitability has vanished, they are using this cheap credit to move beyond their core businesses, i.e. increasing investment.  This is why many, including us, continue to warn about malinvestment and the hidden ticking debt bomb inside China’s financial system that will be a key reason why Chinese GDP numbers will continue to disappoint in the quarters ahead.

Sure, we all got excited when Wen Jiabao (considered by the West to be in the “reform” camp)  and his eight other pals, who run China through the Politburo Standing Committee, jettisoned rising star princeling Bo Xilai, a ruthless climber who was quite happy with the current Chinese growth model.  To many, this very public purging indicates the reformers are in charge and a swift change in the Chinese model of export and investment dependence is now in play.

Well, even if the so-called reformers are in charge, the transition to a consumption model, which by its very nature will require increased individual freedoms, will likely be a much slower process than we would wish for. Any transition will produce a lot of political blowback as the existing order protects its turf, and the Party itself has to worry about being marginalized if it allows its citizens to make their own decisions across the economic sphere.

The point is this: we can’t expect China to be the engine of global growth given the export-cum-investment model is running out of gas.  And we can’t expect some type of overnight smooth transition to a domestic consumption-driven growth model to save the world.

China may soon be heading down the right path. It seems they are; and I think that path will be to the economic benefit of all concerned.  But as always, the proof is in the pudding.