Posted by Next Big Trade 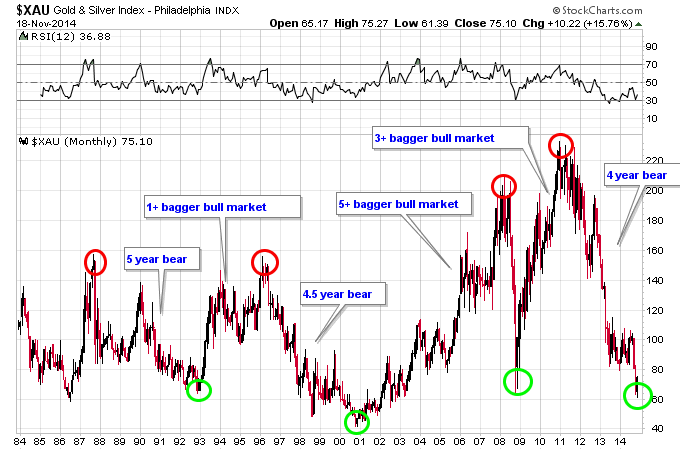 As a follower and participant in the gold bull market from 2002 until now I can say unequivocally that the two most bearish periods sentiment-wise in the bull market so far are the fall of 2008, and right now.  Therefore, by definition, the two most profitable times to buy gold stocks were in the fall of 2008, and right now.  This simple concept is incredibly difficult for most people to understand and put into action.

The media will always lead you astray when it comes to these phenomenal buying opportunities.  In early-2009 it was an incredible time to pick up just about any asset you could think of: real estate, stocks, commodities, etc.  But the overwhelming mood on TV and the Internet back then was bearishness at that epic buying opportunity.  My second favorite glaringly wrong example from the media was the end of 2012 when the media was petrified of the fiscal cliff.  For a month straight in December 2012 that’s all you heard on CNBC, how the fiscal cliff was going to be terrible for stocks in 2013.  But it turns out 2013 was an awesome year for stocks, and the bears in the media were 100% wrong.

What do early 2009 and late 2012 have in common?  Both were the ends of periods that were bad for the markets.  In 2009 of course it was the end of the epic stock market meltdown, and in 2012 it was a two year period from 2011-2012 where stocks didn’t make a lot of head way.  Instead of being bullish at the bottom though the media extrapolated these negative periods out into the future and predicted more bearishness to come.  The media is always focused on the short term and in sensationalizing whatever is happening right now.  This puts way too much emphasis on the current state of the market and forgets the cyclical nature of the market over the long term.  So at the turning point in long term cycles they are always going to be 100% wrong and look foolish.

You can’t listen to the average money manager these days either because like the media they are controlled by the tyranny of the present.  They are slaves to quarterly performance, beating benchmarks, and siphoning profits from their customers who will go away if they lose money in the markets.  Therefore they can’t be involved in getting in too early in a bear market and sustaining losses over a long period of time.  That will ruin their business prospects for the future and they will avoid that whenever possible.

I personally believe what we saw at the end of October was the capitulation of professional money managers who had assets in gold and gold stocks.  They finally threw in the towel at a key tax loss selling time of the year and decided to get out of gold and gold stocks.  The evidence for this is the surge in volume across gold and gold stocks and massive losses over a short period of time.  That usually only happens when the big money gets out all at once.  But they are human like everyone else.  And combined with the fact that their actions are way more affected by short term performance, it’s not surprising that we see massive liquidations of positions at the bottom of a trend, even by the “pros”.

Let’s talk about the life changing opportunity that those that are tied to the present are completely oblivious.  Gold stocks are now at the tail end of a 4-year bear market if you go by the XAU gold stock mining index.  Four year bear markets are typically brutal in gold stocks and this is one of the most brutal yet.  But we know from the chart below that due to the cyclical nature of markets in general and of the gold market in particular, that what we should expect next is a bull market.  And if its a bull market in gold stocks it should offer big gains. Even during the secular bear market in gold from 1980-2000, the gold market went through cyclical bull markets that offered big gains for gold stocks.  The 1993-1996 bull market is shown above and offered more than a 100% gain even though the secular trend for gold at that time was down.

Now starting in 2001 gold had shifted into a secular bull market which caused the bull market in gold stocks that launched in 2001 to be spectacular.  This bull leg offered more than a 5-bagger for the XAU and even bigger gains for individual gold stocks.  Then we got the 2008 meltdown, which produced the next epic buy point for gold stocks and a 3-bagger bull market.  It was incredibly painful to buy at the depths of that 2008 bear market.  But not only was there a 3-fold gain in the XAU, some of the individual returns on specific mining stocks during that period dwarfed anything else in the entire stock market.  Silver Wheaton and First Majestic Silver are two stocks that come to mine that had 20-baggers from their 2008 lows.

I personally didn’t believe we would get another opportunity like 2008 in this gold bull market but here it is, staring us right in the face.  And I think the prospects for this next bull run are truly mind boggling if you think about all the money that is going to come flooding back into this sector when the secular bull resumes.

The original article and much more can be found at: http://www.nextbigtrade.com

The views and opinions expressed are for informational purposes only, and should not be considered as investment advice. Please see the disclaimer.