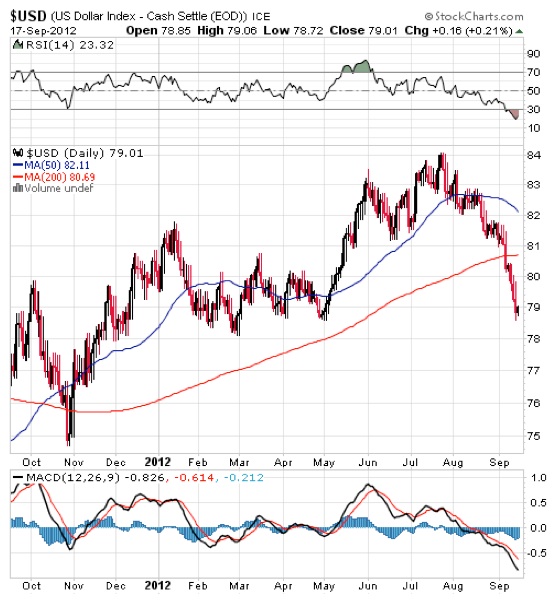 Ed Note: The Godfather of newsletter writers, Richard Russell, had some absolutely extraordinary thoughts about life, the markets and gold.  Here is what Russell had to say: “Most of the people in the world suffer from fear, anxiety, anger, guilt, bitterness, resentment, sorrow, depression, and various other emotions which can mar their lives.  The majority of these emotions are holdovers from damaged or traumatic infancies.”

“I was brought up in the early 1920s.  In those days parents were taught by doctors to feed infants by the clock, not when the infant was famished and screaming with hunger.  In those days, infants were not tended and comforted when they needed warmth and attention.  They were often tended by nurses and allowed to “cry themselves out,” thus leaving parents with plenty of free time of their own.

I had damaged parents, which affected me very negatively.  My mother’s mother died in childbirth when my mom was two years old.  So my mom grew up without a mother, and as a result, she knew nothing about mothering.  My father’s father (my grandfather) committed suicide when my dad was 8 years old.  As a result, my poor father was anxious, fearful, and nervous all his life.

Unfortunately, I absorbed the fears and anxieties of my parents, who had done the best they could, based on what they knew at the time.  I grew up during the Depression, believing or feeling that the world was a harsh and unsafe place.  As a result, I think I developed an extreme sensitivity to danger in the world and in the stock market.  Interestingly, I think I kept my subscribers OUT of every bear market since the 1950s.

Let me go a bit further into my family history. My grandfather owned the biggest jewelry store in Charleston.  He killed himself when he lost all his money in the awful panic of late 1902.

My dad’s half-brother (my uncle Irving) jumped out of the window of a New York hotel when the stock market crashed in 1929.  Irving had a lot of stock in the family-owned City Stores.  Irv was a playboy, and he lived entirely off his dividends.  When City Stores cut its dividend in 1929, it was too much for Irving — so he killed himself.

With that sordid history, it’s kind of ironic that I ended up writing about the stock market.  Strange, indeed, or is it?

December gold closed yesterday at 1770.60.  If I was in GLD, I’d be fretting.  But if I was solely in bullion coins, I wouldn’t give gold’s action a second thought.  The reason I say this is because buying GLD is a trade, and holding gold coins is a move that theoretically is forever.  For instance, if I had GLD, at some point I’d sell it, and hopefully show a profit.

But I don’t know when I’d ever sell the bullion coins.  Sell them for what?  For Fed-created fiat paper?  Actually, I’d probably gift the coins to my kids, on the basis that it would be an easy transfer of wealth, much as some women gift their diamond engagement rings to their daughters.

Below is the US dollar as per yesterday’s close.  The dollar has broken below both MAs, and is sitting on support, which is around 78 3/4.  RSI shows the dollar over-sold, but MACD allows for a further decline.  Thank the Fed’s massive money-creation project for this chart, but what the heck, a cheaper dollar helps our exports.

But a cheaper dollar is also inflationary.  Marc Faber states that the Fed is destroying the world with its wild printing, and I can tell you that Mr. Faber is really angry. Awhile back, the “surest” way to make money was to short the Euro.  When too many traders get on one side of an item (in this case, the short side), this is what can happen.  A strong Euro means a weak dollar, and a weak dollar translates into higher gold.  But we must be careful, because the Euro is in the overbought zone of RSI, and a lot of its strength may be coming from short covering.