“Libor is signaling a problem.” 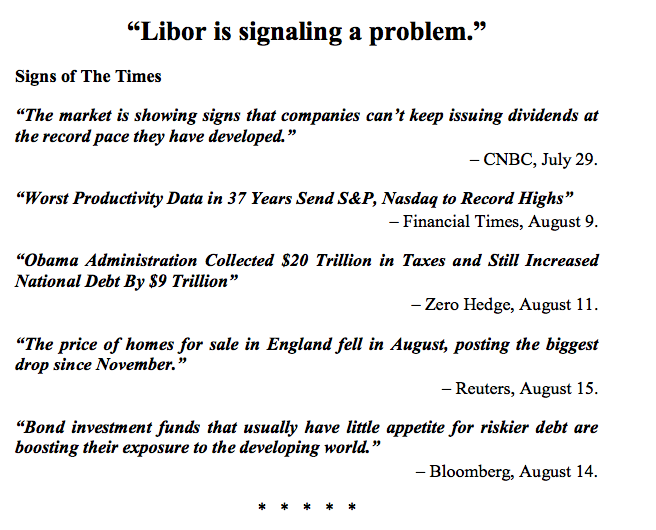 One could not deliberately contrive the conditions behind some of the above headlines. The headline writer at the FT must have enjoyed the irony about the worst productivity number and market highs. We did and we don’t think it is an example of the stock market climbing the “Wall of Worry”.

It is another example of bureaucratic madness such as buying bonds in the late 1940s in a futile attempt to keep long-dated Treasuries from rising above 3 percent. Then stepping up the effort in the belligerent attempt in the 1960s to keep them from rising above 6 percent. At the high yield of 15 percent the price of their bond holdings was down hugely.

And then there was the central banks compulsion to sell gold right down to 253 dollars. That is per ounce.

Because they think it will stimulate the economy.

Beyond this, there is the possibility that, underneath it all, they are down to just trying to prove that intervention works. Well, it must work because that’s what the theory says. In 1989, most folks in Eastern Europe finally understood that command central planning was not working.

In the same year, best-selling US economics textbooks were celebrating the wonders of central planning in Communist countries. Well, they had full-on command central planning and it was assumed by American professors, such as Blinder, to work. The 1936 German version of Keynes’ masterpiece included a preface that boasted that his theories would work best in an authoritarian political system:

“The theory of aggregate production, which is the point of the following book, nevertheless can be much easier adapted to the conditions of a totalitarian state than the theory of production and distribution of a given production put forth under conditions of free competition and a large degree of laissez-faire. This is one of the reasons that justifies the fact that I call my theory a general theory.”

Senior stock indexes are flying at 70,000 feet in an airplane designed for 30,000. There is not enough oxygen to sustain intelligent life.

We have been mentioning, the “old” Ted-Spread, which has been trying to break above the level reached with the last financial crisis in Europe. Another way of monitoring money market risk is through Libor, which is moving in a concerning direction.

A sharp increase in Libor has preceded important market peaks. A chart follows.

The “jump” began from a low of .315 last October and reached .60 in December, which signaled the severe hit into January-February.

A move of only 28 bps did some damage.

At today’s lower-rates, of which there has been only one example, 28 bps was needed to prompt a decline.

Perhaps 28 or so bps will do it again?

The beeps will tell us.

In the meantime, Ross has had a “model” that called for one more rally and this is it. This page has been calling for positive vibes for the senior indexes through August. (The NDX took off and set the best Daily RSI since 2014.)

And not-so-positive for key sectors such as the Transports and Banks.

The TRAN worked for us going into last year’s peak and it has not (repeat not) been confirming the new highs in the senior indexes. The rally out to April reached 8148, the rally into July reached 8048 and the latest reached 7951 on Tuesday. Today it is down .50 percent while the senior indexes are unchanged.

On the broad US market, the NYA had made it to 10892 in the middle of the month. This has been a well-corrected rally but it is up to resistance. Last year’s high was 11255.

Outstanding sectors such as Utilities (XLU) and Base Metal Miners (XME) reached technical excesses in July and have rolled over. XLU took out the 50-Day early in the month. XME was down 5 percent yesterday, breaking below the 50-Day.

Clearly, the bps are getting the Base and Precious Metal Sectors. These were the big performers on the way up. Are they leading on the way down?

The world is again in love with junk interest rate instruments. Will the love be requited or unrequited?

The history of interest rates is a record of costly disappointment. Ironically, that was the case in 1981 when everyone hated long-dated Treasuries. At 15 percent.

Now it is equally controversial that prices for financial assets can deflate.

The long Treasury prices became inflated enough in early July to register some rare technical excesses. The high on the TLT was 143.36 when the world believed that the rate would replicate the decline to Germany’s “Zero” level.

However, the decline has again worked its way to the 50-Day ma, which has provided support. A good test of the high seems likely.

Germany’s bond market is small compared to that of the US. Our view is that with so many diverse players in the game, Treasuries are vulnerable to market forces.

Excesses noted some weeks ago in the High-Yield market have not been corrected, but have continued to build. The rebound for VWEHX has now clocked the biggest swing in the Weekly RSI since the rally to 6.17 in June 2014. This rally has been from 5.28 reached in dismal February and the high has been 5.85 this week. There is resistance at this level.

The US corporate market is not owned by the Fed and is mightily vulnerable to the next decline in crude oil.

Archaic theories compel the Fed to drive the dollar down. Market forces are always current and have been resisting policy. Can you imagine that?

For us, the DX is a technical pattern on a chart. That is working towards another sensational rally.

The “One more” rally for stocks and crude has been accompanied by a decline in the DX. For the last week it has been stabilizing at 94.5.

On the longer term, the pattern is similar to the bottom set in the first half of 2014 at the 80 level. The trade was either side of the 20-Week ema and the breakout was getting above the line at 81 in that fateful August.

Now the trade is at 94.50 and the ema is at 95.50.
Later in September, it could breakout and the initial target becomes the 98 handle. It could be disquieting to central bankers.