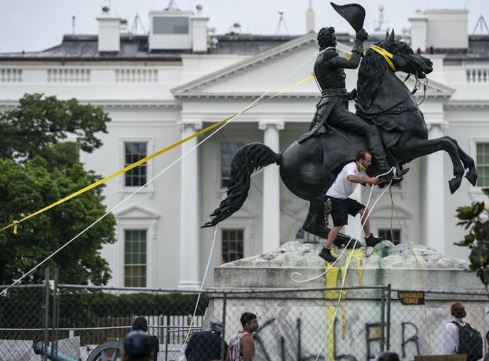 Smiley Face Liberalism
The collapse of liberal elites under a leftist offensive has been in the making for years.
By Daniel Henninger

The people in the streets—idealistic protesters, full time activists, anarchists—are the young men and women of the current American left. The people running the country’s institutions—mayors, cultural leaders, media executives, business managers—are a generation older and cut from the cloth of traditional American liberalism. Give the left some credit: After tolerating their liberal betters for years, they knew when the opportunity had arrived to push them over the cliff. They have just taken it. Events of the past four weeks have produced a lot of agog reactions, but among the most interesting have come from European friends who came to the U.S. years ago in search of what can only be called the American dream. Now they are asking: Why is there so little resistance to what is going on? How could cancel culture happen in a country with legally protected speech? Why has there been no defense of private property—which remains, believe it or not, a big idea in the minds of  foreign born citizens, from taxi drivers to builders of new companies? The quick collapse of America’s elites under this left-wing offensive is striking and a historic event. Within a week of the left going after monuments to U.S. presidents—George Washington, Thomas Jefferson, Ulysses S. Grant—the head of the American
Museum of Natural History in New York said she had no problem with dismantling history, and asked the city to take down its statue of Teddy Roosevelt on the grounds that it is offensive to blacks and Native Americans, which is absolutely disputable.

In Brooklyn, residents are in despair over nightly ﬁreworks noise, shootings and killings as the police, under threat of prosecution or ﬁring, have pulled back. On Monday evening, Borough President Eric Adams responded with a solution: “empower” community groups to discuss with residents the dangers of shooting aerial bombs at each other. How did the capitulation happen so fast? In fact, it was a long time coming. It is hardly an insight by now to blame this on the schools. But revisiting 30 years of educational irresponsibility seems necessary, insofar as the reality of the moment represents an erasure of history. If U.S. Grant, just toppled in San Francisco, was a racist, American history has indeed ceased to exist. History has a way of returning, and some day it will record how a generation of university presidents produced this result. In the 1980s and early ’90s, when the notion of speech-codes emerged with formal restrictions on words and speech, the seeds of today’s cancel culture were planted with the acquiescence of university leaders. When liberal professors embarked on tenure denials for conservative colleagues, who were important ballast to the growing group think, campus administrators caved.
Then when the students turned on some of these same liberal professors, with accusations of racism, they caved again.

These rocks rolled steadily downhill with barely a peep of public resistance from trustees. In the 1990s, Yale famously returned a $20 million donation from alumnus Lee Bass to create a curriculum in Western civilization,   a k a history. These acts of denial as liberal traditions eroded were mostly petty self-interest. If you didn’t lose your job, you were OK. This is what “silence is compliance” really looks like.

Here is why this is relevant to what happened so quickly the past four weeks. Liberal tolerance (their one cardinal virtue) eventually degraded into rote acceptance. They claimed to be defending evolving standards but eventually there were none.The activists’ steady descent into irrational and illogical claims was impossible to miss. It became obvious that wokeness had turned into a weapon, but liberal leadership blandly let it happen.
Even more important to understanding recent events is a recognition of how the left eliminated traditional liberalism’s moral leadership.

For decades, liberals have made claims of moral authority in the U.S.’s political life—through depressions, wars, the civil-rights movement. In recent years, the left has successfully established, at least among elites, that we live in a society with few constants of moral behavior. But if even the idea of a functioning consensus about morality has been erased, then no one has moral authority. About all that’s left is smiley face liberalism.The organized, professional left has played its hand well, ﬁlling the void of a no-longer relevant liberalism with an authoritative, reductionist assertion of “systemic” guilt—secular guilt being the most powerful political idea of our time—in matters of race and gender.By now, displaced liberal elites have so little self-conﬁdence that they fear even criticism from their children or teenage grandchildren for trespassing the new racial and gender orthodoxies.

Will it last? I think people across the political spectrum are shell-shocked by the events of these weeks, especially the Taliban-like smashing of monuments and the embrace of lawlessness as an official ideology, with no credible push back from Joe Biden or other prominent Democrats. But if history teaches us anything, it’s that the American electorate won’t be pushed around permanently. Write henninger@wsj.com.