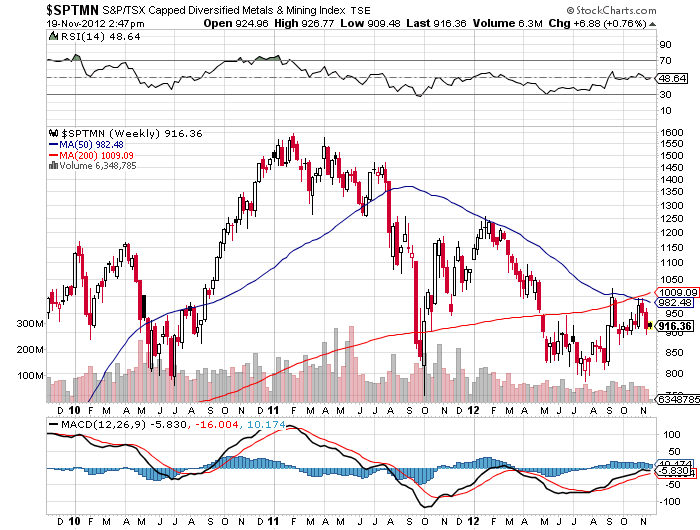 U.S. Stock Market – I have constantly resisted the cries from bears to come back ever since leaving the bearish camp in March 2009. It’s been my opinion that the least resistance was up, not down and the surprises shall be to the upside.

It would come as no surprise that last Friday ends up marking an important low and in this seasonally favorable week of trading, the “Don’t Worry, Be Happy’ crowd ramp up their yearly “Santa Claus Rally” talk (It helps that Santa Claus will be in the White House for four more years).

No Bah-Humbug from me!

Gold – For the umpteen time, the bloodied perma-bears have tried to break the back of the “Mother” of all gold bull markets and failed. Look for $1.745 to be taken out on a closing basis and then yet another challenge of key resistance around $1,800.

Mining and Exploration Shares – I think last week was an important low up and down the food chain. While it won’t be straight up from here, I do think we can say good riddance (fingers, toes and all other body parts crossed) to the horrific bear market of 2012

The comments above by Peter Grandich @ Grandich.com

Ed Note: The following comments and the short term chartwork on mining shares is from Don Vialoux’s monday report:

The TSX Metals & Mining Index dropped 44.47 points (4.66%) last week. Intermediate trend is neutral following a break below support at 910.32. The Index fell below its 20 and 50 day moving averages. Short term momentum indicators are trending down. Strength relative to the S&P 500 Index remains positive despite the loss last week. Seasonal influences start to become positive at this time of year. The AMEX Gold Bug Index dropped 40.36 points (8.84%) last week. Intermediate trend is down. The Index remains below its 20 and 50 day moving averages and fell below its 200 day moving average. Short term momentum indicators are oversold, but have yet to show signs of bottoming. Strength relative to gold bullion remains negative.