Last Week: A Pivotal Turning Point To Go Down in History 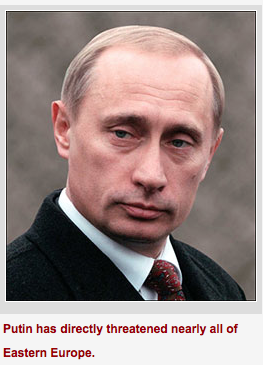 ” What’s the next likely phase”

Larry and Martin: What Can Save America?

This past week will go down in history as a pivotal turning point never to be forgotten.

Russia annexed Crimea, the first major land grab in Europe since World War II. A new Cold War has suddenly burst onto the scene. And Janet Yellen testified before Congress that short-term interest rates could be raised sooner than most analysts expected.

Now, to better flush out the real meaning between these unusual events, Martin called me with three timely questions:

Here’s an edited transcript of our call.

Martin: What’s the next likely phase in this new Cold War?

Larry: Putin is already giving us an advance warning. Not only did he annex Crimea, but he directly threatened nearly all of Eastern Europe — by having an envoy tell the United Nations Human Rights Council in Geneva that … Russia is committed to “protecting” any country with sizable Russian-speaking populations.

That means the futures of Estonia, Latvia and Lithuania — three countries with large ethnic Russian minorities — are also in play.

Larry: Yes! Sounds crazy, doesn’t it? But remember: Not only are the sanctions announced by Europe and the United States paper thin, both have effectively kowtowed to Putin.

Martin: In what way?

Larry: They have accepted Russia’s Crimea takeover — a strategic peninsula the size of Maryland — as fait accompli. And they even vowed not to respond with military force.

Martin: So you’re saying that vow empowers and enables Putin to go beyond the Crimea.

Larry: He already has, in a subtle but powerful way. I’m talking about Iran. As you know, the United States absolutely needs Russia’s help to bring the shaky nuclear talks with Iran to a successful conclusion. But this week, Russia’s delegate to the talks [Sergei A Ryabkov] made comments to the effect that Russia might scuttle the Iran deal in retaliation for U.S. and European sanctions.

Plus, Putin can also play the same big card he’s played before — shutting off the massive natural gas pipelines to Ukraine and Western Europe.

With this kind of leverage as cover, and with President Obama declaring that he absolutely won’t send U.S. troops, what’s to stop Russia from taking over the Russian-speaking Eastern Ukraine? Nothing!

Martin: Not hard to believe, is it?

Larry: Not in the slightest! That’s what he did in Crimea this week. And it’s also what he did in Georgia just a few years ago. Look. Putin has concluded that both the United States and Europe are weakened opponents.

Martin: In that context, why did President Obama just declare the U.S. would not get involved in any military action? Everyone agrees we don’t want to go to war. But strategically, what does the U.S. gain by openly admitting that to a likely opponent?

Larry: That was entirely for domestic consumption, regardless of the tactical consequences. Obama knows that the last thing the majority of Americans want is another war. Meanwhile, he already has some of the lowest job approval ratings of any president ever — currently 40 percent, according to Gallup, just two points from his low of 38 percent.

He has a Congress that can barely agree to anything. He has mid-term elections coming up. He has the media, even the democratic media, firing shots at him like a machine gun.

Putin’s circumstances are precisely the opposite. Since the Crimea takeover, his approval rating has skyrocketed by 10 percentage points to 71.6 percent, his highest ever. He has virtually zero opposition in the Duma, the Russian legislature. He has already silenced nearly all criticism in the Russian media and blogosphere.

All this gives him almost a checkmate-type of tactical advantage. So you can expect Putin to continue, or even step up, his bold, aggressive actions.

Martin: Let me shift the focus to the Asian side of the Cold War, China vs. Japan. I read articles that, relatively speaking, tensions there have died down recently.

Larry: Not for long! China and Japan are still duking it out over an official apology over the Rape of Nanjing, and China has successfully usurped hundreds of square miles of airspace over sovereign Japanese soil at the very south of the Japan, including the resource-rich Senkaku Islands and surrounding waters.

Martin: But China abstained from the U.N. vote the other day against Russia.

Larry: That’s only because it’s also afraid of secessionist movements in its own western regions.

Martin: Are you suggesting that Russia and China are rebuilding the Iron Curtain?

Larry: Yes, with some obvious differences, of course:

Eastern European countries are now on this side of the curtain.

But here’s another difference to consider: During most of the Cold War, China and Russia were arch rivals. They even fought a series of border skirmishes. Today, there’s real potential for a closer Sino-Russian alliance.

Martin: Larry, among all the analysts I read and hear, you have been in the forefront in terms of educating and warning the public about the rising cycles of war. Now it’s happening, and it’s happening faster than any of us anticipated.

My next question is …

Is the United States still doomed to a major failure?

Larry: Not now. Not soon. And not on the visible horizon. But the United States will slip to the number two economy in the world. Definitely.

Martin: Are we going to slip to number two militarily as well?

Larry: In terms of personnel, China is already more than three times stronger, with nearly 7.1 million in the military, compared to 2.3 million in the U.S.  What’s worse, we’re cutting our military budget, while China and Russia are growing theirs. For now, though, in terms of military technology and hardware, no one comes close to the U.S.

The other areas that concern me are twofold: Patently unpayable government debt and IOUs. Plus heavy-handed Washington efforts to track where everyone’s money is.

They’re tracking every bank overseas to hunt down where Americans may have money. They’re closely monitoring every transfer of more than $3,000 out of the U.S. to any foreign country. And they’re spying on Americans left and right. Throw in the 16,000 IRA agents that are being hired to enforce Obamacare and it’s just going to get worse. Washington is desperate for revenues so it’s turning against its own citizens. That’s what bothers me most.

Martin: What are the chances of another major bubble and bust in the U.S., of the kind we saw in 2008-2009, or worse — either a hyperinflationary crisis or a deflationary crisis?

Martin, you were the first to say it back in 2008 and 2009. Remember? When Washington bailed out the banking system and the real estate markets, you asked “Who the heck is going to bail out Washington?”

You were spot on. There is no entity or group of entities or governments who can bail out our government, or Europe’s for that matter.

Both the governments of the U.S. and Europe did this to themselves. Both spent too much money. Both made promises they could never keep.

Investors all over the world are yanking their money out of sovereign bonds at a frightening pace. That’s why interest rates are going up and bonds are falling in value.

That’s why the United States is on a declining slope.

What could save the U.S. from that fate?

And more recently … the computer. Internet. Email. CDs and DVDs.

Just consider all the major drugs and medical technologies that have come from U.S.-based research. There isn’t a country on the planet that comes close to the sheer volume and impact of the discoveries, innovations and patents that North America has contributed to the world.

If anything can save the United States of America, that’s it.

Economist Joseph Schumpeter called it “creative destruction.”  When something in an economy is destroyed, something else is created.

For instance, when the dust bowl decimated American farms, millions of farmers and farm laborers were unemployed. But with the introduction of assembly lines and the expansion of factories, entire new job sectors opened up and America became the manufacturer for the world.

More recently, if the U.S. had not lost ground in the manufacturing sector, it’s very possible we would not have had as much success in leading the computer industry, the Internet and digital technology.

Larry: The destruction side is in big government. Big government is destroying itself. The creative side is that the American entrepreneurial spirit is going to come roaring back — in 3D printing, robotics, drones, driverless cars, life extension, mechanical eyes, hearing implants and much, much more.

These are the things that can save America.

Martin:  Thanks, Larry. Let’s be sure to talk again soon.