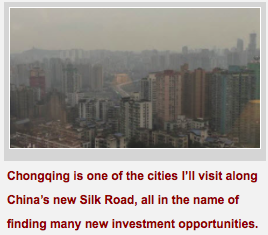 I’m writing to you today from the 30th floor of the Hilton Chongqing in Chongqing, China — where I just arrived to kick off a two-week tour of China’s Silk Road 2.0 — the 21st century version of the ancient, 2000 year old Silk Road trading route that connected China to Europe and beyond.

You probably never hear of Chongqing. Yet it’s a city of 8 million people and the capital of the province, where nearly 34 million Chinese make their home. The province slopes down from north and south toward the Yangtze River. I’ll be here for a few days scouting opportunities for my subscribers to my Real Wealth Report.

From here, I’ll cruise down the Yangtze River to various spots along China’s entirely new Maritime Silk Route which will create a new trading route from China down to Indonesia.

And then, I’ll be off to Xian and Lanzhou, two more cities along China’s new Silk Road — all in the name of finding my subscribers the many new opportunities here for enormous wealth creation …

In what is rapidly becoming the biggest infrastructure build out in the history of civilization. A nearly trillion dollar project that is unprecedented in scope and size.

Don’t worry, if you are not a subscriber to Real Wealth Report, you’ll still be able to follow my travels and learn of the luscious profit opportunities. I’ll make sure of it.

Also, don’t worry: Though I’ll be traveling through some pretty remote places in China via water and rail, I have full access to the Internet to monitor the markets, speaking of which …

The U.S. Dollar Remains in a Raging New Bull Market

Sure, there will be some setbacks along the way for the dollar. But the recent rally in the greenback — a whopping nine-month 20.9 percent gain in the Dollar Index, a basket of six currencies including the euro, the Japanese yen, the pound, Swiss franc, Canadian dollar and Swedish krona — is merely just the beginning phase of the dollar’s new bull market.

There are several reasons the dollar is strong. I’ve covered most of them in various columns and in even more detail in my Real Wealth Report.

For now, simply know this: All the pundits out there calling for the death of the dollar and hyperinflation in the United States are dead wrong!

They don’t understand that private sector dollar-denominated loans around the globe are now as high as $3 trillion, meaning not only that the world is awash in dollars, but the constant creating of new dollar loans as well as the rolling over and paying off of older dollar loans means dollar demand is also soaring.

And they don’t understand that the fiscal and monetary measures being taken by the leaders of Europe are also dollar bullish, euro bearish.

What’s worse is that they can’t see the writing on the wall: The leaders of Europe and Washington are both waging tax witch hunts on their citizens, actions that are also dollar bullish …

As Europeans seek shelter outside their own country …

And Washington wages a witch hunt on every American citizen, myself included, who has money overseas.

All this is dollar bullish and it will remain so for many months to come. It will only end, unfortunately, when the dollar becomes so strong — and deflation in the U.S. so bad —

That the Treasury and the Federal Reserve both begin to aggressively devalue the U.S. dollar once again.

That’s many moons away. For now and for the foreseeable future, you can expect …

FIRST, more downside pressure on the euro. In fact, as I pen this issue from my hotel room in Chongqing, the euro is approaching a new low, the Dollar Index a new high.

SECOND, a continued bear market in commodities. Yes, there will be some short-covering rallies now and then, in the precious metals, in the energy markets, in grain markets and more.

But overall, the commodity sector, precisely as I have been forecasting, remains in a bear market that has not ended …

And will not end until we see rivers of blood in the streets in all commodity sectors … including fresh new lows in virtually all commodities.