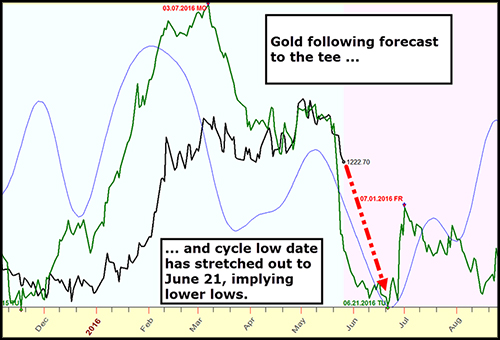 “no way are the metals or miners going straight up from here. No way are they on a rocket rise that will never look back. And no way should you jump on board with both feet. You’ll surely lose it all”

They say the background environment for gold — and other precious metals and mining shares — has never been more bullish.

I say, baloney! Yes, gold has bottomed, last December. Yes, gold, the precious metals and miners are in new bull markets that will see much higher prices and could last for years.

But no way are the metals or miners going straight up from here. No way are they on a rocket rise that will never look back. And no way should you jump on board with both feet. You’ll surely lose it all.

For one thing, gold is still extremely overbought. It would be very hard for gold to make much upside progress being so overbought.

For another, according to the most recent Commitments of Traders report (COT), gold and silver still have way too many speculative long positions open versus commercial short positions.

That’s a recipe for a hard fall, not a continued rally.

For yet another, the precious metals are entering the seasonally weak summer months, a period of lackluster physical demand around the globe.

Then, of course, there’s the U.S. dollar, which is still holding its own, biding its time, but ready to break out to the upside again, and soon.

I also urge you to take another look at the Artificial Intelligence forecast chart of gold that I showed you last week, repeated here. That forecast has not changed!

What about silver, platinum, and palladium?

All pretty much the same. They will follow gold’s lead.

What about the mining sector, which has started to pull back?

I’m as anxious as you are to load up on miners. But they too are extremely overbought and overvalued right now.

In fact, according to a recent report from Morgan Stanley Australia, miners are now extremely overvalued. Example: Newcrest Mining (NCM.Australia) trading at $21.76 Australian Dollars, compared to fair value of $A12.90. That’s 68% overvalued.

Northern Star Resources (NST.Australia) trading at $A4.74 compared to fair value of $A3.45. That’s 38% overvalued.

Morgan Stanley is right. Be patient: The pullback I have forecasted has started, is still on track, and should bottom later this month.

Then it will be time to load up!

related: Given the correction Rambus Chartology has an excellent take on Gold Stocks: Be Prepared