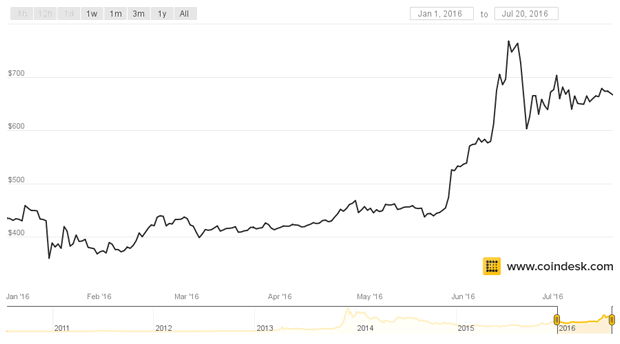 The world has woken up to the fact that the Central Banks are a curse, rather than a boom to the global economies, and their time left is slowly coming to an end because of new technologies and currencies.

People are starting to park their money in digital currencies, like Bitcoin, rather than parking them in fiat currencies. This is primarily due to the Negative Interest Rate Policy as well as Zero Interest Rate Policy of the Central Banks, which explains the sharp rise in the price of Bitcoin, this year as seen in the chart below. Billionaire resource investor, Carlo Civelli, believes that the Central Banks cannot get away with all the monetary printing. And I believe that the more they print, the more they push investors away from wanting their fiat currency.

“If we all talk about the end game and a scenario of total collapse, I can see the governments telling everybody that your money is now worthless and the bonds you own are now worthless. You all have to take a haircut”, said Civelli.

The institutional investors are recognizing this outcome,
hence, they are the largest group of Bitcoin buyers.

Jeremy Millar, Founder and Managing Partner at Ledger Partners in London, believes that people at hedge funds and family offices contribute 50% to 90% of the Bitcoin’s current $6.4 billion market cap.

“What is clear though is that over the last two years, bitcoin has emerged from its ‘hacktivist’ origins to a more institutionalized ecosystem which includes the participation of hedge funds, traders, and professional investors,” said Millar, reports Reuters.

Lack of regulation was scaring a few customers; not that regulation helped in any way during the 2007 crash, and neither will it help in the next crash. Nonetheless, the entry of the Winklevoss twins has given the whole industry an entrepreneurial boost. The twin brothers have co-founded the Bitcoin exchange Gemini.

“With Gemini, we’re a regulated trust company in the state of New York; we’re regulated under banking law, so we operate and have the same controls and procedures that you would expect of any financial institution (like your bank). That didn’t exist in the early days of Bitcoin. Quite frankly, it didn’t exist a year ago . . . It was a Wild West in the early days,” said Tyler Winklevoss.

It is not only the U.S. and the European investors who are worried about their currencies, but the Chinese investors are worried, as well, about the decreasing value of the yuan.

Zennon Kapron, founder of Financial Technology Consultancy Kapronasia and author of a book on Bitcoin said, “it seems that China is leading a lot of the movement. People are protecting their investments [by converting yuan into bitcoin],” reports the Wall Street Journal.

The chart below shows the Chinese appetite for Bitcoin. The two Chinese exchanges, Huobi and OKCoin, both witness approximately 92% of the global trade in Bitcoin. “There’s a lot of hot money in China that has to go somewhere,” says Du Jin, Chief Marketing Officer at Huobi, reports The WSJ.

Austrian economist and investor Tuur Demeester believes that “it is important to use Bitcoin as part of a diversified portfolio.” He adds that bitcoin “offers a counterbalance to a series of growing risks that are associated with traditional investment practices,” reports the Brave New Coin.

“We think a well-rounded portfolio includes investments in a basket of block chain technologies (altcoins), with an emphasis on Bitcoin. This portfolio can play a part in three distinct strategies: as an insurance policy, as a hedge in a broad speculative portfolio and as a calculated bet on an early retirement,” wrote Mr. Demeester, in his report.

He goes on to add that “we believe returns of 100x over 10 years are possible, though obviously not guaranteed.”

My readers know that I do not big believer in owning fiat currencies for the long-term. My main emphasis is to find ‘alternative’ asset classes, which are mature enough, but not saturated. The risk-reward in such classes should be high.

Gold and silver are undeniably the best investments for the long-term considering the low-risk that they carry. Similarly, within the next few days, I will keep an eye on Bitcoins, as well, and suggest trading ideas so as to profit from it.