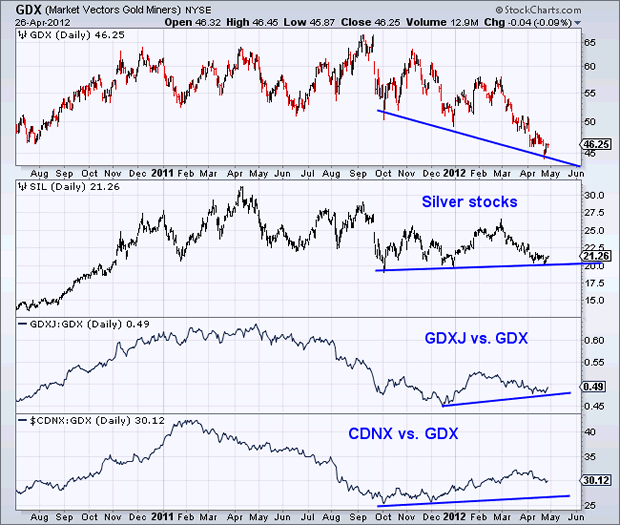 Jordan Roy-Byrne
While the precious metals sector has consolidated and struggled to find a bottom, an important development has taken place. First, lets harken back to 2007-2008. Large cap mining stocks peaked in March 2008, yet the speculative sides of the sector “gave out” far earlier. The juniors and silver stocks actually peaked in April 2007. That was about a full year ahead of the large gold stocks. As the 2007-2008 crisis unfolded, juniors and silver stocks led the way down and displayed extreme relative weakness even as metals prices were firm.

Today, we have an entirely different and bullish development. As you can see in the chart below, the speculative areas of the sector have been outperforming the large gold producers (GDX). If this were really an end to the bull market or another collapse, the juniors and silver stocks would not be showing this kind of relative strength. In fact, the silver stocks have actually managed to hold near their 2010-2011 lows even as gold stocks have broken to new lows. We also see that the CDNX has been outperforming GDX since October while GDXJ has been outperforming since December. Given the recovery of the past few days, we are likely witnessing the start of the next cyclical bull market for the gold and silver stocks which have essentially been in a cyclical bear or correction since December 2010. The above analysis implies that the more speculative areas of the sector, the juniors and silver stocks will be the leaders.