Know When To Hold Your Winners 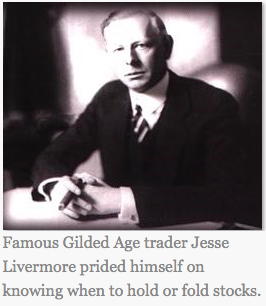 Last week, as the Nasdaq Composite Index crossed 6,000 for the first time, Robert Shiller, a Nobel laureate economist, made the rounds in the financial press.

He’s worried. Valuations are historically high. A crash is coming, eventually, he argues.

With his carefully measured tone and impeccable academic pedigree —  he’s a professor at the Yale School of Management — Shiller is the perfect pundit.

Jesse Livermore, the tenacious trader immortalized in the 1923 investment classic Reminiscences of a Stock Operator, warned about pundits. He hated tips and claimed following them had lost him hundreds of thousands of dollars.

Shiller’s concern is based on something called the Cyclically Adjusted Price-to-Earnings ratio, better known as the CAPE. It’s a valuation model that takes a conservative ten-year average of corporate earnings and divides by the comparable metric for price. And CAPE has reached levels not seen since 1929 and 2000, two dates that send shivers down most investors’ spines.

The rest of the economic story does not help the bulls’ case, either. Those periods were characterized by extremely high levels of Gross Domestic Product growth. In 2000, GDP growth was north of 4%. Last week, GDP was reported at a measly 0.7%. It’s not the first time in recent years that the CAPE has been high. The ratio pushed near current levels in 1998. At the time, the dotcom era was in full stride. In the ensuing two years, the most speculative stocks became even more dear as prices sprinted higher. For example, adjusted for splits, Amazon (AMZN) zoomed from less than $5 in 1998 to $113 in 2000.

Something like that could happen again. “We’re in an oddball enough mood,” Shiller admits.

The economist explains that President Trump is a game-changing figure, for better or worse, who wants to disrupt the underlying fundamentals of the capital markets. Changing the corporate tax code would be bullish for stocks in the near term.

However, periods of extreme optimism have an ugly common denominator, Shiller notes with a wry smile. They always lead to crashes.

Shiller is right, empirically. However, that information is not particularly useful.

Livermore understood that the most important attribute of a successful investor is the ability to hold winners. He called this “sitting tight,” and it is not as easy as it appears.

Too many investors want to sell winners quickly. They believe stock strength merits selling. Pundits preach everywhere they can find listeners. They construct models. They get on their soapbox on TV. Stocks are up, sell.

Livermore found just the opposite is true. Strength is validation an investor got it right. Investors are wise to learn to embrace this, learn from it.

They are also wise to challenge pundit assertions. Can their claims pass the test of tested scrutiny?

Understanding market conditions is one of the cornerstones of the information I provide to members. Valuation models alone are rarely useful. You need to know what to buy and when events change that warrant selling.

Our newsletters show members how to identify big trends, find the right stocks, and most important, how to sit tight for the big money. A lot more money is lost waiting for crashes than during crashes themselves.