Killing Cancer One Gene at a Time 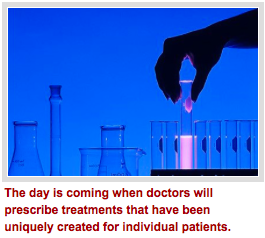 You probably haven’t heard about precision medicine. That’s fine, it wasn’t even possible ten years ago.

But now we’re entering the new Gilded Age — and suddenly researchers are using it to fight many deadly diseases, including brain cancer in kids. What they found was astounding: More than half the children exhibited genetic abnormalities that could influence how the disease was treated.

“The reason we did this trial was that brain tumors are a leading cause of death in children, and the treatments that we and everyone else use are decades old – radiation and chemo,” writes Pratiti Bandopadhayay, a pediatric neuro-oncologist at Dana-Farber/Boston Children’s in the medical journal Neuro-Oncology. “Our approach to try to improve on that is to target the individual tumors of each child.”

That’s the key. Precision medicine promises to change health sciences by using data analytics and what we know about ourselves to tailor personal therapies and treatments.

In this way, precision medicine is the perfect symbol of the New Gilded Age. It grew out of the awesome advances in cloud computing. It touched medicine and changed what researchers thought to be possible. Without that, neither genome sequencing nor bespoke drug discovery would be possible. Certainly it would not have been possible for doctors to dream about developing treatments based on the patient’s individual biology.

In theory, it all seems simple enough, even logical. Getting to this point has been a bit more complex.

It started with the sequencing of the human genome. At an initial cost of $3 billion and 13 long years of research, the outlay of monetary and human capital was extreme. Yet the project was bountiful. It allowed scientists to learn about illness at the cellular level, determine what precisely went wrong, and — at least in theory — determine a treatment for the mutation.

For example, most patients currently diagnosed with cancer undergo a battery of oncology tests and usually end up with chemotherapy. That one-size-fits-all treatment carpet bombs everything, killing good and bad cells indiscriminately.

Precision medicine is more of a smart bomb. Doctors locate the mutation at the cellular level, find the specific drug treatment to correct the abnormality. Then they calibrate the dosage based on personal genetics.

The theory is great, and there has been a lot of promising work. The only holdback is cost.

Sensor data from wearables like FitBit, smartwatches and phones will help, too. It will be true personalized medicine.

In January 2015, President Obama announced he would be adding $215 million to his annual budget for a comprehensive precision medicine plan. The National Institutes of Health will help build a 1 million volunteer sample group to draw more data; its National Cancer Institute will research the genomic drivers of cancer; the Food and Drug Administration will develop new testing techniques to expedite the drug approval process; and a consortium of privacy groups is being consulted to maintain strict privacy standards.

More recently, 21 Chinese hospitals reached an agreement to use IBM’s cognitive platform Watson for Oncology to help tailor personalized, precision medicine.  Cancer is the leading cause of death in China. In 2015, more than 4.3 million people were diagnosed and 2.8 million died. Watson for Oncology draws data from 300 medical journals, 200 textbooks and more than 15 million pages of text and peer-reviewed work to make recommendations.

It also has a working relationship with the world renowned, Memorial Sloan Kettering Cancer Center in New York.

In 2013, the center made news when a breast cancer patient, who had been battling the disease for the better part of 30 years, made remarkable progress following an experimental precision medicine treatment developed by AstraZeneca.

Tumors, which had become visible on her skull and face, completely receded.

Pharmaceutical companies are gearing up. In 2015, Roche promised as much as $1 billion to Blueprint Medicines for five small molecule projects in development. Then, in January 2016, Roche announced it would spend more than $1 billion on a 56% stake in Foundation Medicine, a molecular and genomic diagnostic company. Illumina, another diagnostic service provider, has formed similar alliances with Germany’s Merck KGaA , AstraZeneca and Sanofi.

Each of us is unique, a product of our own chemistry and environmental factors. It makes sense to build healthcare treatments tailored to that uniqueness. Ultimately it could be less costly and more effective.

Until recently, it was impossible. Cloud-computing advances in the New Gilded Age are changing everything.