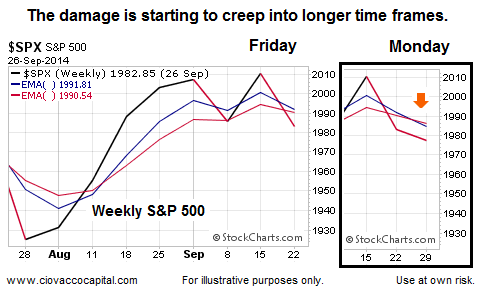 An encouraging economic report was released Monday, which increased concerns about a sooner rather than later Fed rate hike. From Reuters:

Consumer spending rose 0.5 percent last month after being unchanged in July, the Commerce Department said. The growth in August was just above the median forecast in a Reuters poll of economists…Even after adjusting for inflation, spending was 0.5 percent higher, the biggest gain since March. Growth in personal income ticked up 0.3 percent, in line with forecasts.

This week’s stock market video shows while the bulls are still in control, their margin of error is getting quite thin as interest rate concerns increase.

With the Fed signaling “considerable time” may be removed from their policy statement in the coming months, market participants are concerned about a 1994-like event taking place in late 2014 or early 2015. From Businessweek:

The last time consumer-price increases were slowing before the Fed started increasing borrowing costs was in 1994…”The critical example for the markets is 1994, and that’s the thing that we all fear,” Gary Pollack, the New York-based head of fixed-income trading at Deutsche Bank AG’s private wealth management unit.

Our market model called for a reduction in our equity exposure last week based on evidence of waning economic and market confidence. As shown in the two weekly snapshots of the S&P 500 below, the market’s indecisiveness is starting to impact the intermediate-term trend in a negative manner. Since the look of a weekly chart is much more important at the end of the week, the bulls do have some time to repair the damage. Therefore, we will continue to hold a mix of stocks (SPY), leading sectors (XLV), bonds (TLT), and an offsetting position in cash until the evidence improves.

If there was ever an economic report that could flip the bull/bear field, it would have to be the monthly employment report, which is coming this Friday. Wednesday brings the latest read on U.S. manufacturing activity.

As we will demonstrate via charts below, the financial markets have been becoming increasingly concerned about the coming shift in Fed policy. Friday’s economic data reinforces the idea that the Fed has to begin raising rates soon given recent economic improvements:

From The Wall Street Journal:

The U.S. economy grew in the spring at the fastest pace since late 2011, another sign the recovery is accelerating after five years of sluggishness. The economy last grew at a 4.6% pace in the fourth quarter of 2011 and hasn’t exceeded that rate since the first three months of 2006.

The million dollar question in 2014:

Is the economy strong enough for stocks to withstand higher interest rates?

The concept of investment buckets can help us monitor the risk related to a Fed-induced correction in stocks. In the 1990s, tech stocks were the place to be. After the dot-com bust, those who placed their money in bonds or shorted stocks did very well until October 2002. The winning asset class between late 2002 and October 2007 was stocks. History tells us picking the right asset class bucket is extremely important in the quest for satisfying investment returns.

Limited Capital To Allocate To Buckets

With central banks around the globe skewing the prices of stocks and bonds via artificially low interest rates, it has become more difficult to monitor risk and make allocation decisions.

To gain a better understanding of how monitoring the markets can assist with investment risk management, consider the statement made above:

After the dot-com bust, those who placed their money in bonds or shorted stocks did very well until October 2002.

With the benefit of hindsight, the statement above seems obvious to anyone who lived through the 2000-2002 bear market in stocks. Was there a logical way to sidestep the painful losses experienced by stockholders (March 2000 – October 2002)?

From a probability perspective, the answer is yes by simply paying attention to what was happening, rather than focusing on what might happen next. The charts below clearly identified a shift from “risk-on” to “risk-off” that occurred as the dot-com bubble was bursting.

In the second half of 2000, with the S&P 500 ETF (SPY) trading near $112, a clear and observable shift favoring bonds over stocks had taken place (see Section A below). After the charts said “bonds are a better place to be than stocks”, SPY dropped an additional 44% before hitting bottom at $63.14 in October 2002. Section A in the image below shows the performance of bonds (VBMFX) relative to the S&P 500. Section B is the S&P 500 in isolation. Section C is bonds in isolation. What Are The Markets Telling Us Now?

As we noted September 16, bullish momentum has slowed noticeably in recent weeks, which tells us to keep an open mind about further weakness in stocks. The chart below shows the weekly trends continue to favor stocks over bonds (AGG). However, the market is not as confident today as it was earlier this year (compare slopes of green and orange lines). The slope of the orange line indicates confusion about Fed policy, the economy, and the stock market’s ability to avoid a corrective episode. Investment Implications – The Weight of The Evidence

Is the market’s indecisiveness related to the Fed particularly new? No, we outlined our concerns in more detail in this September 12 video clip, which made it easier to cut risk this week. During Thursday’s selloff in stocks, numerous forms of support were violated (see chart below). Our market model allocates heavily to equities when the odds of success are favorable. With the break of support in the chart above, and given the market’s current bigger picture profile, the odds of success have shifted this week to mixed-to-unfavorable. Therefore, a lower allocation to stocks is prudent until things improve. We reduced our exposure to stocks three times between Tuesday and the end of Thursday’s session. We will enter Friday’s session with a flexible and open mind, but the market must prove it to us now.